The measure addresses more than just the COVID-19 vaccine, but targets mandatory requirements for all vaccines, including for the flu. 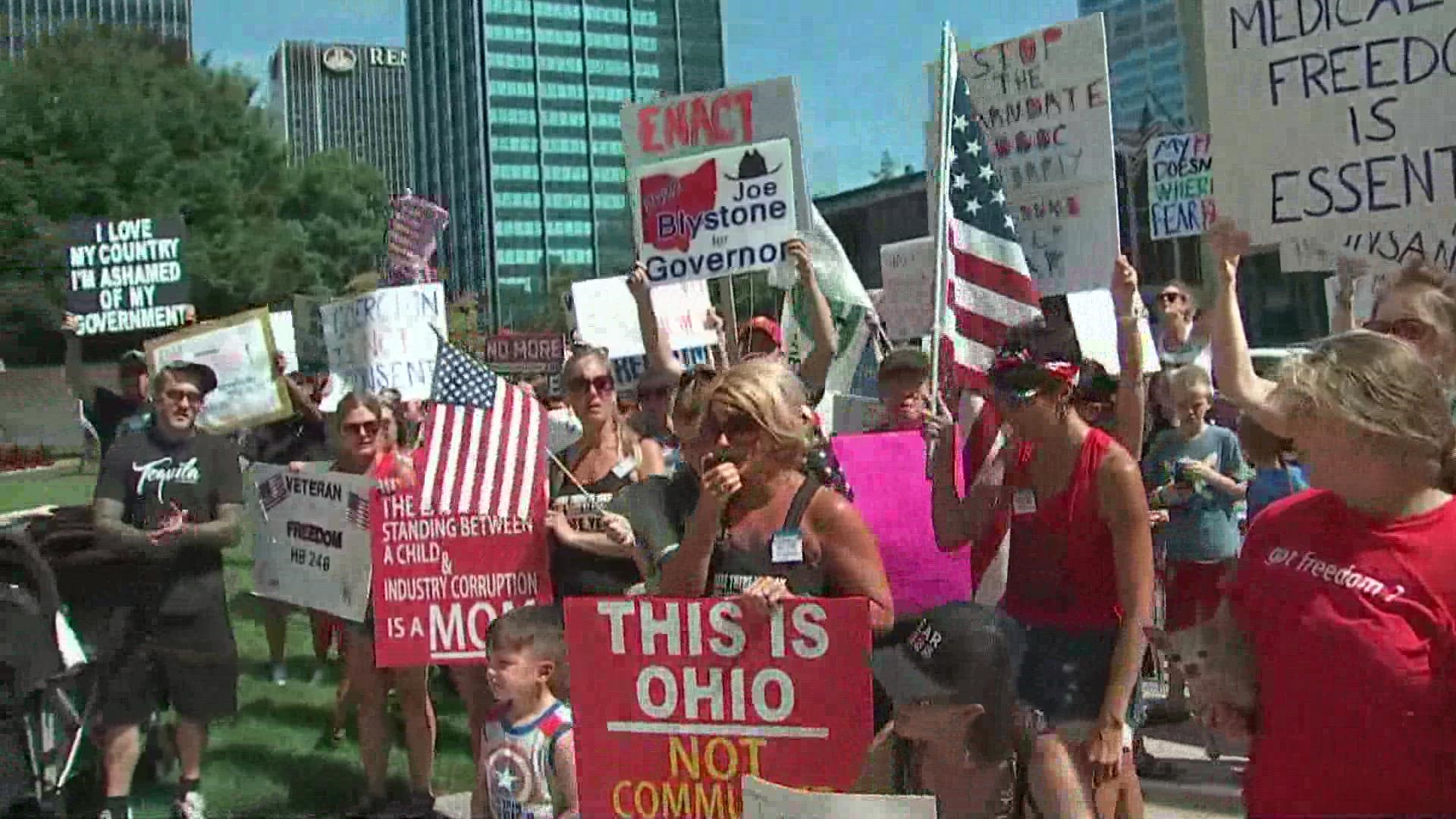 COLUMBUS, Ohio — Hundreds of supporters of a Republican-backed bill that would prohibit employers from requiring workers to receive vaccinations descended on the Ohio Statehouse on Tuesday as lawmakers heard a single additional day of testimony on the closely watched proposal.

While speakers before the GOP-controlled House Health Committee were evenly divided between those for and against the measure, supporters far outnumbered them on the Statehouse grounds.

Hundreds rallied outside ahead of time carrying signs with slogans such as “Enact Vaccine Choice” and “No To Forced Vaccines!”, then crowded into the Statehouse atrium to watch the hearing live on large-screen TVs, applauding speakers who favored the legislation and laughing at those who didn't.

Supporters told the Health Committee they questioned the vaccine's effectiveness and emphasized over and over that individual choice should outweigh a government or private employer's ability to require the vaccine.

Brian Latham, who said he was testifying as a father of three, questioned receiving a vaccine that has not been tested for long-term side effects.

“So all of a sudden we’re supposed to roll up our sleeves to take a vaccine that has never been on the market before?” he said.

Similarly, bill supporter Angie King said that without long term studies of the vaccines, “I will not be an American lab rat for the CDC or Big Pharma.”

The legislation has attracted opponents of COVID-19 vaccines but does not mention the coronavirus. Instead, it addresses mandatory requirements for all vaccines, such as for the flu.

The legislation would also prevent employees from being fired as a result of refusing to get vaccinated and would allow them to sue their employers if they felt they had been wrongly dismissed.

“Everybody's voice has been heard,” Lipps said, before cautioning witnesses to avoid rude or bullying comments.

Opponents included Dr. Emily Miller, a pediatrician and mother of four, who said the legislation if passed would exacerbate the current health crisis and add to the strain children's hospitals are currently under because of an uptick of non-coronavirus respiratory illnesses this summer.

The bill will “make our current situation even worse and I’m asking you please do not pass it,” Miller said.

Another opponent, employment lawyer Sara Jodka, warned of unintended consequences if the bill becomes law, saying employees will begin challenging other workplace requirements they disagree with, such as mandatory drug tests.

If enacted, the bill will “make government a super HR department over our employers, telling them what they can and cannot do to protect their own workforces,” Jodka warned.

Debate over the legislation achieved national notoriety in June when a doctor testified before the committee that people have become magnetized by the vaccine, allowing metal to stick to their skin. That has not happened.

The federal Centers for Disease Control and Prevention issued a bulletin June 3 specifically debunking this falsehood, explaining that all COVID-19 vaccines are free from metals.

Opponents of the bill include hospitals, state associations of doctors and nurses, and other health care groups that say the measure could reverse decades of protection against preventable diseases such as measles, mumps, hepatitis, meningitis and tuberculosis. Both the Ohio Manufacturers' Association and the Ohio Chamber of Commerce are also opposed.

Lawmakers should not be micromanaging businesses as they try to keep their employees safe, chamber president and CEO Steve Stivers said last week.

“No legislator can claim to be pro-business and at the same time support efforts to restrict an employer’s ability to manage their workplace free from government interference," said Stivers, a former Republican state lawmaker and U.S. congressman.

The fate of the bill in its current form is unclear. House Speaker Bob Cupp, a Lima Republican, said Monday that the committee chairman was instructed to hold one additional hearing — the one on Tuesday — without scheduling a vote or making changes.

Hearings will then stop "while we work with the chairman, the bill’s sponsor, and all interested parties on this important issue,” Cupp and the rest of the House GOP leadership said in a statement.

GOP Gov. Mike DeWine also opposes the legislation, calling it “a very, very serious mistake,” that, in the case of hospitals, would strip their authority to decide how to keep patients safe.

Last month, however, DeWine signed a bill into law prohibiting public schools and colleges from requiring individuals to receive vaccines not granted full approval by the U.S. Food and Drug Administration. The governor had urged the FDA to grant such approval, which it did on Monday for the coronavirus vaccine made by Pfizer.

The anti-vaccination mandate bill before the House Health Committee also strengthens notices that schools must provide parents about exemptions they can seek against having their children vaccinated. In addition, the bill would repeal a state law requiring college students to disclose whether they have been vaccinated against hepatitis B and meningococcal meningitis.

A new law in Montana is the only measure that similarly bans employer-required vaccinations, though it permits health care facilities to require unvaccinated workers and those who refuse to disclose their vaccination status to wear masks and take other precautions.