First time for everything, right? Snowless March not out of the question

We've been on a snow drought after a very snowy February. It could set a new record for Columbus and one that has never happened before. 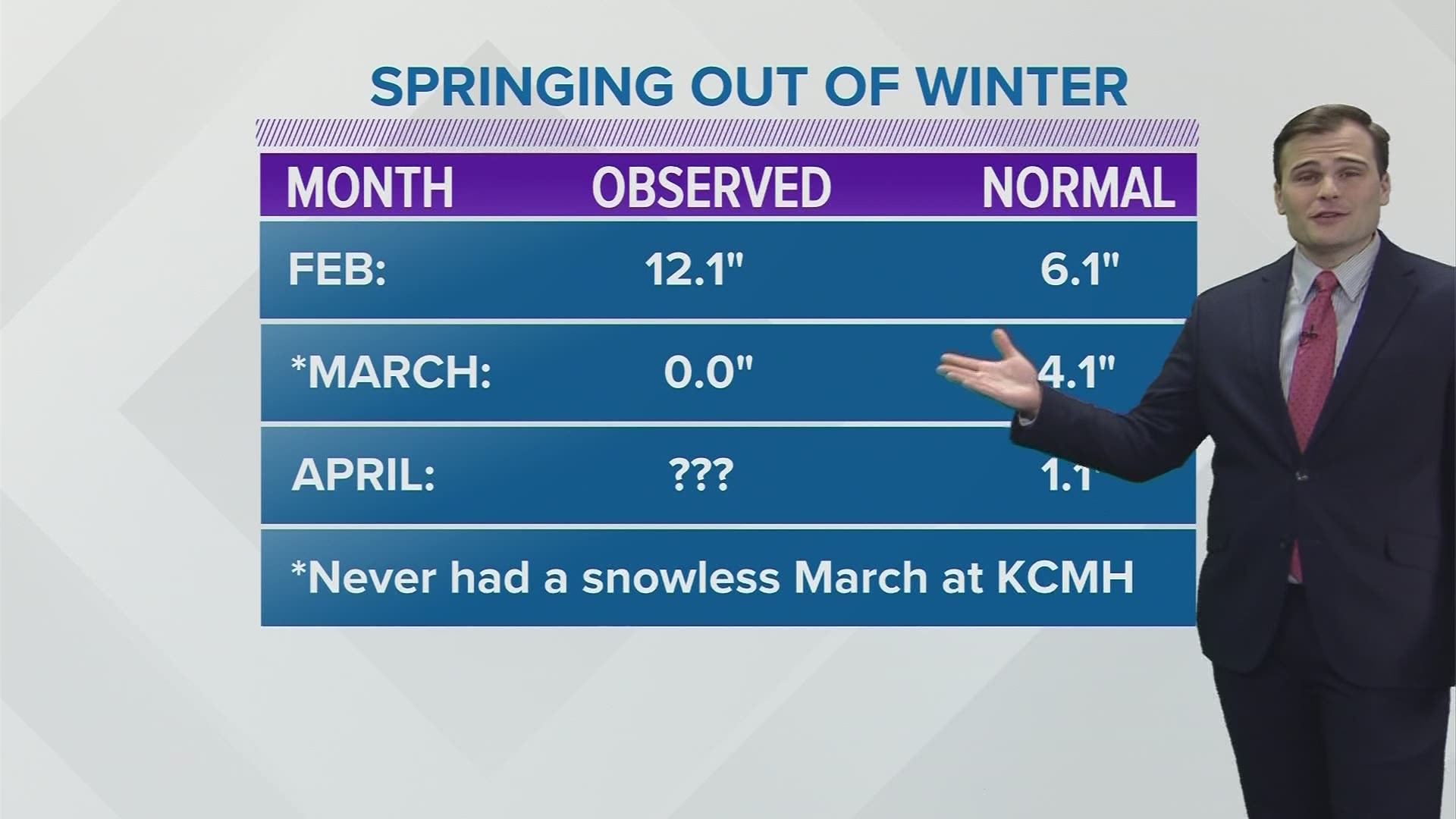 With temperatures in the low 30s Monday morning, I'm sure many of us were searching for our winter coats that may have been stowed away for the rest of the year.

If you did, I don't blame you. Temperatures have been very warm and we've had one of our warmest March's in some time. With the recent warm up, we've been avoiding the cold and also, the snow.

After having one of the snowiest February's on record, we have been avoiding the measurable snow and even something as minor as snow flakes.

We have had several occasions where no snowfall was measured at John Glenn Columbus International Airport(KCMH); but there was always a trace amount of moisture reported.

A trace amount of moisture something that is very small.  It's reported as, "snow fell on this day, but it didn't amount to anything that could be measured." or some other sort of similar verbiage that highlights what was falling from the sky that day in small amounts.

Since KCMH has been holding weather data for Columbus, there has always been at least a trace amount of moisture; but that could soon change.

There will be a shot of colder air building behind some rain later on Wednesday, so we could see a small chance for some snow to mix in before midnight, helping us get that "trace" amount of snow before we ring in the month of April.

[9:40 PM] If there is no snow reported at Columbus (KCMH) through midnight Wednesday night, it will become the first March on record at the site without a single snowflake. However, can't rule out a flurry Wednesday evening as cooler air filters in. It may be a photo finish!

While it may be a "photo finish" for snow, the cold will already have a good grasp on the state and will make temperatures fall well below freezing both Wednesday night and Thursday night.

With temperatures this cold, all of your hard work in the garden may be in jeopardy; if you already have plants in the ground.

Considering how temperatures will be in the 20s for more than a few hours in the mornings later this week, you will want to be proactive and bring inside all of our potted plants.

Plants that have already flowered will be most susceptible, so try to water them while it's still a little warm out during the day and then cover them up with a cloth material in the evening to help keep the temperatures from falling as much.

While we're all starting to get more eager to be outside and in the garden, remember that we still get cold temperatures in March, April and even early May.

Our average last 32 degree day is April 16th.  Even when temperatures are in the mid 30s at night, the ground temperature could dip to 32 degrees or below, so always keep an eye on the forecast when the temperatures drop.

While it's still early to get crazy planting in the garden, it's never too early to get started with planning and you can always start most of your plants by seeds indoors about 4-8 weeks before your last frost/freeze dates.