Dozens of roses were left on vehicles, leading people to call the sheriff’s office, which issued a warning about a potential tie to human trafficking. 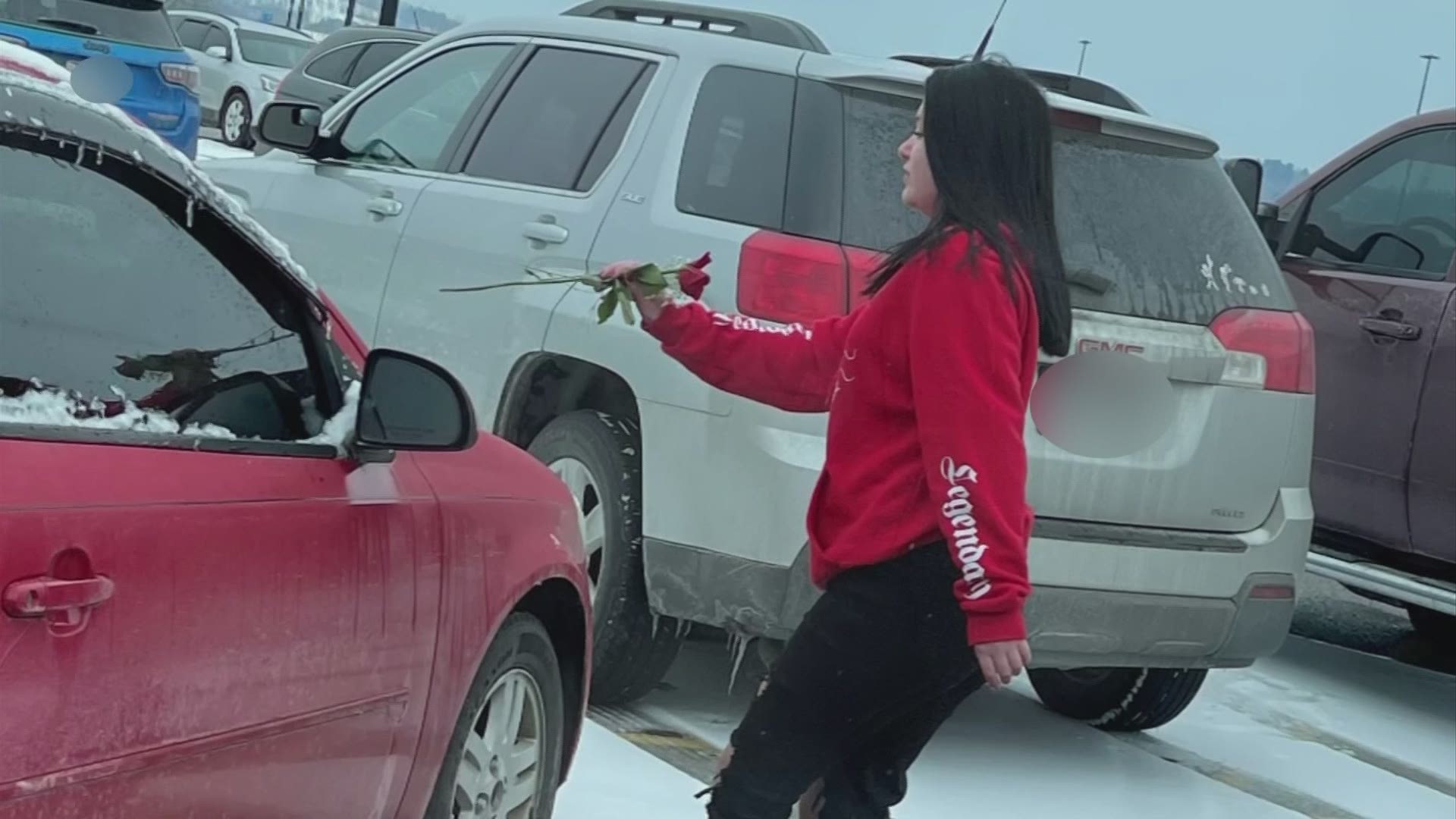 She got engaged and had plenty of leftover red roses to show for it.

“I think (my fiancé) ended up saying that he spent over $300 in just roses,” Strupe said. “He was just going to throw them outside or in the trash, so I told him, instead of wasting, we should pass it on.”

So Strupe enlisted the help of her sister and daughter, and the trio headed out to spread some love, by placing roses on vehicles.

Strupe’s daughter, Kiara, had the idea of going to a place where the group could find a lot of vehicles.

“We should just go to Walmart, thinking like, oh yeah, this will be a good idea, people are going to come out and think it’s awesome, and that didn’t happen,” Kiara Strupe said.

It certainly did not.

Soon after the roses were left on vehicles, customers and Walmart employees began to discover them.

A store manager was so concerned after reviewing security footage that he called the Coshocton County Sheriff’s Office.

Deputy Chris Johnson got the case.

“Was this something heinous, or was it something of a lesser nature, was it completely harmless,” Deputy Johnson said. “We just didn’t know at the time.”

Deputy Johnson said there have been other cases where flowers or other items are placed on vehicles as distractions. Human traffickers may do so to create an opportunity to approach and perhaps kidnap an unsuspecting victim.

He said, shortly after he took the report from Walmart, dispatchers Amber Walters and Peyton Slusser started taking calls.

“Once those calls starting coming in, and they really just blew up the phone lines, we knew at that point it might be something that we want to just go ahead and notify the community about, make them aware until we have further information about it,” Deputy Johnson said.

So, the sheriff’s office posted a warning on Facebook:

On 2/15/2021 the Sheriff’s Office received a call from the Walmart Security Department in regards to suspicious activity in their parking lot involving a vehicle and two, what appear to be, males looking into vehicles and placing a single red rose under the windshield wipers of those vehicles. While reviewing the Walmart Surveillance Cameras, the two unknown males are seen exiting from, what appears to be, a newer style dark gray Ford Explorer, or similar looking vehicle, with chrome rims and side mirrors and placing a single red rose on it. This same sequence occurs multiple times on several vehicles that are parked on the outskirts of the parking lot. The males then get back into the vehicle and leave the area. Although there have been several Facebook posts of similar instances that have happened in Ohio regarding Human Trafficking related techniques, it is unclear at this time if this incident is related to such type of crime. After contacting surrounding Law Enforcement Agencies, this type of incident involving flowers being left on vehicles has not been reported to their Agencies. This incident is being treated as suspicious at this time. We ask that you stay vigilant and remain aware of your surroundings at all times and report any suspicious activity you may encounter. This incident remains under investigation by your Coshocton Sheriff’s Office.

The post started racking up shares and comments. And it eventually made its way into Strupe’s feed.

“(It) basically said that there’s like a potential sex trafficking thing going on at Walmart, and, at the bottom of it was like a match to my vehicle description, so I knew I had to call them then and let them know,” Strupe said.

She did call to talk with dispatchers, and the mystery was solved.

“It was a relief, and it was nice to put out that update letting the community know that it had been solved, and it actually was just a kind, harmless deed that someone was doing,” Deputy Johnson said.

The follow-up post gained similar traction on social media, with many chiming in with appreciation for both Strupe and the sheriff’s office.

2/15/2021 After investigation of the Walmart rose incident and as a result of getting this information out to the fine citizens of Coshocton County, we are pleased to announce that the case has been solved and is in no way related to Human Trafficking in our county. A resident of the county called to inform us that they were the ones responsible for the incident and only had good, harmless intentions in mind. They had received the flowers as a Valentine’s Day gift and instead of throwing them way after beginning to wilt, they decided to pass on the love by leaving them for someone else to enjoy. They never meant to alarm anyone or cause any panic in our community. We were able to verify their story and have updated the Walmart Security Department of the outcome. We want to thank everyone for sharing our original post and getting the information out for others to see. As always, we are here to serve you and can’t do it without the support of the citizens of this county.

“I’m glad that people who did have those suspicions didn’t take it lightly, and it could have been something serious,” Strupe said. “And, although our intentions weren’t that, I think it was a positive thing that the sheriff’s department acted so quickly in both situations – posting and letting people know that is potential, but then, at the same time, reassuring everyone that might have been a little scared that it wasn’t that, and it was just us trying to spread kindness and make people’s day.”

And, while the incident does not deter Strupe from wanting to do future good deeds, her daughter is having some second thoughts.

“Next time, if we’re handing out roses, we’re going inside Walmart and handing them to people so there’s no confusion, at all,” Kiara Strupe said. “Like, we can do something. Just not that. Ever again.”

Deputy Johnson also agreed that the community should keep up the good deeds. But he added that it is very important for everyone to be vigilant and aware of their surroundings. He advises people to follow their guts and to not hesitate to call law enforcement about something suspicious.