This is the second lawsuit to be filed against the global chemical company after the plant’s organic peroxides ignited after back-up generators were flooded and failed during Hurricane Harvey. 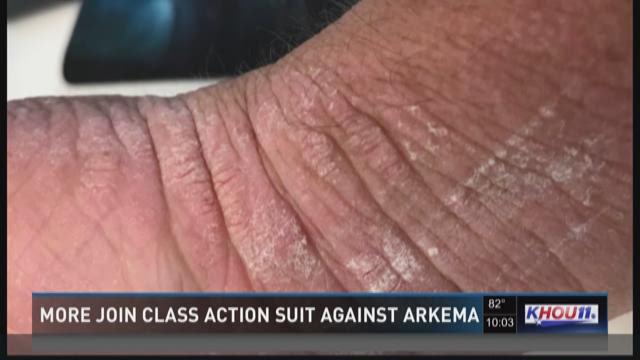 HARRIS COUNTY, Texas– A Texas state trooper, Harris County sheriff’s deputy, and sergeant are among the more than a dozen Crosby residents who filed a class action lawsuit against Arkema on Tuesday in federal court in Houston.

This is the second lawsuit to be filed against the global chemical company after the plant’s organic peroxides ignited after back-up generators were flooded and failed during Hurricane Harvey.

The lawsuit alleges testing on soil, water and ash samples found on the plaintiff’s property revealed residents were exposed to toxic substances released from the facility.

The lawsuit also states that the 15 plaintiffs, some of whom live nearly seven miles from the Crosby factory, suffered personal injury, emotional distress, property damage, loss of income and more.

One of the plantiffs, Shannan Wheeler, told KHOU he found more than 40 pieces of black ash on his property. His frustration, he was outside the evacuation zone. He says Arkema gave no warning. He showed KHOU pictures of what he describes as a chemical burn. One of the many problems we heard about affecting people's health, property and livelihood.

"After I'd mowed the yard, I was picking up grass clippings, I still had gloves on but grass had gotten up behind the part of my gloves, at first I felt stinging and some redness, thought maybe I got ants, looked no it's not ants, couple more handfuls, it's burning," said Wheeler.

Arkema’s Crosby facility made national news when chemical explosions began around 2 a.m. on Aug. 31, then continued for several days. Nearly half a million pound of liquid organic peroxides were stored at the facility in six containers.

The organic peroxides must remain cool. But as Hurricane Harvey released historic rain across Southeast Texas, the plant flooded under six feet of water. The company says that triggered a chain reaction of failures that allowed the chemicals to heat up and explode, releasing smoke into the air.

Arkema did release a statement saying, "We won’t comment on specific ongoing litigation. Based on testing results received to date, Arkema has not detected chemicals in off-site ash, soil, surface or drinking water samples that exceeded Residential Protective Concentration Levels established by TCEQ for soil and groundwater. We do not know what these lawyers tested for. We are cooperating with authorities in ongoing investigations and we will not comment further on these lawyers’ accusations."

The initial lawsuit against Arkema was filled by first responders on Sept. 7. Nearly two weeks later, more first responders and some Crosby residents joined the lawsuit. That lawsuit, filed in district court, sought at least $1 million.

The federal lawsuit, thus far, includes only residents, including one who operates a horse stable west of the factory. The plaintiff returned to the stables each day following the explosion because “the valuable horses under his care would not have survived had he not fed and watered them.” Attorney say that triggered respiratory issues and eye irritation. Tests of his property found toxic compounds contaminated his property, according to the suit.

The lead counsel for the new lawsuit is Dennis Spurling.