Ashli Babbitt's family says they will file a wrongful death suit in the Air Force veteran's fatal shooting. The DOJ has declined to bring charges in the case. 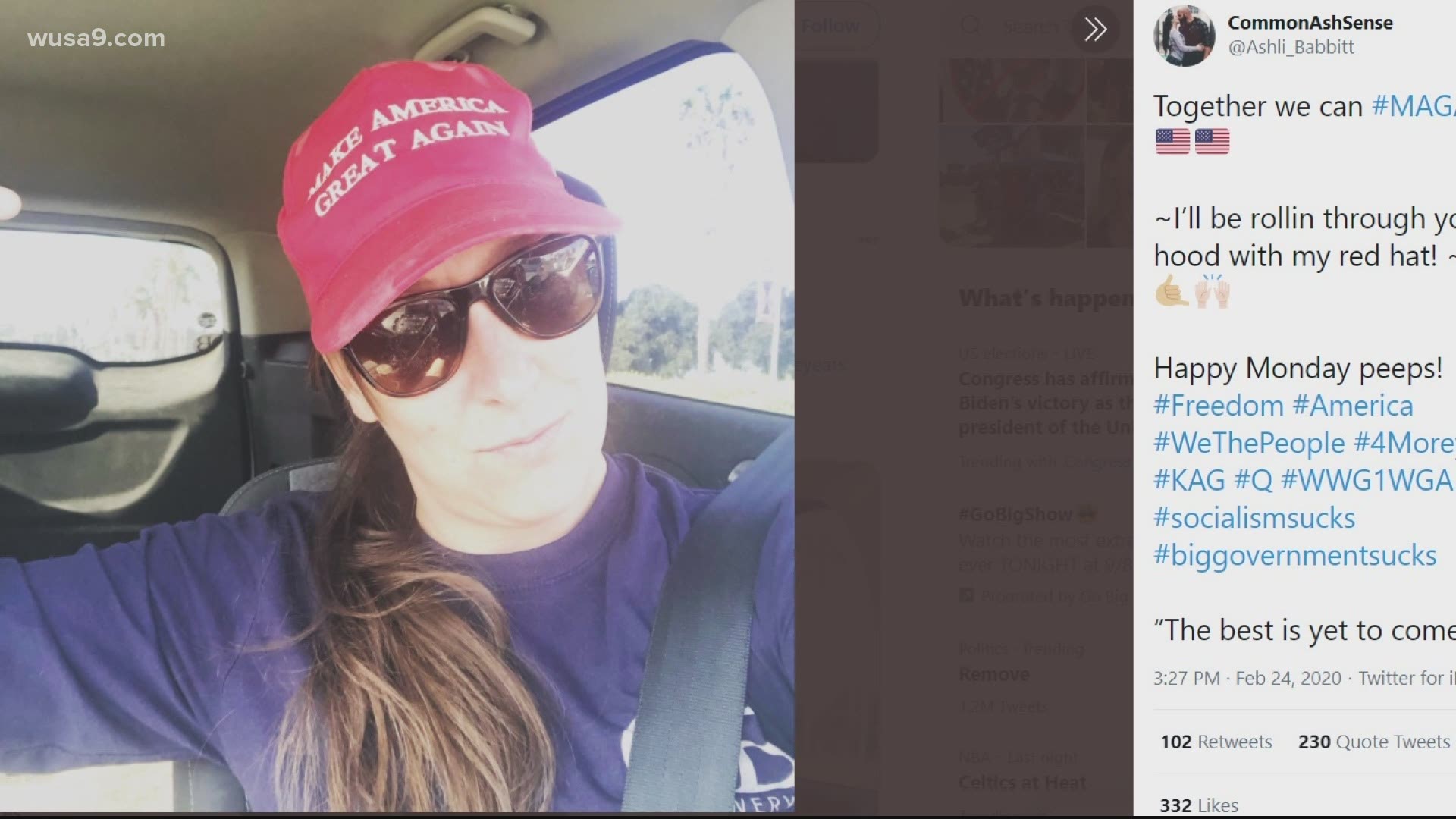 WASHINGTON — The family of Ashli Babbitt, the California woman fatally shot during the January 6 Capitol riot, plans to file a multi-million wrongful death lawsuit against the United States Capitol Police, according to reports.

Terrell Roberts III, an attorney with the Riverdale Park, Maryland-based Roberts & Wood, told Newsweek and CNBC on Thursday that the Babbitt family was planning to sue the department and the officer who shot her for at least $10 million over the death of the 35-year-old Air Force veteran. Roberts & Wood confirmed to WUSA9 Friday afternoon that the law firm was working with the Babbitt family, but would not comment over the phone about whether a lawsuit was in the works.

According to family members, Babitt was “fanatical” about loving her country and trying to get former President Donald Trump reelected. Her uncle said she came to D.C. on January 6 because she “thought she could influence whatever was happening in Washington that day.”

Video captured during the Capitol riot showed Babbitt among the mob trying to break into the Speaker’s Lobby outside the U.S. House of Representatives. She was shot in the shoulder by a Capitol Police officer when she attempted to climb through a broken window to an area where police had barricaded themselves. She was pronounced dead a short time later.

Earlier this month, the Justice Department announced it would not pursue charges against the officer who shot Babbitt, saying there was insufficient evidence to support a criminal prosecution.

“Specifically, the investigation revealed no evidence to establish that, at the time the officer fired a single shot at Ms. Babbitt, the officer did not reasonably believe that it was necessary to do so in self-defense or in defense of the Members of Congress and others evacuating the House Chamber,” the Justice Department said.

In a statement on April 14, Roberts pushed back on the Justice Department's decision, saying it "plainly glosses over" the facts.

"The actual evidence is this: The officer show an unarmed woman who was not an immediate threat to him or any Member of Congress," Roberts said. "That is inconsistent with any claim of self-defense or the defense of others, period."

Roberts said at the time the decision did not dissuade the family from its goal of "ultimately vindicating Ashli Babbitt's constitutional rights in the civil arena."

The law firm's website says Roberts has "special expertise" in the field of police misconduct and civil rights litigation. Roberts previously represented the family of Prince Jones, a Howard University student who was killed in 2000 by an undercover Prince George's County police detective. In 2006, a civil jury awarded $2.5 million in damages to Jones' daughter, then 7 years old, for her father's wrongful death.

'The Storm is Here'

On social media, Babbitt was outspoken about her support for former President Donald Trump. Her Twitter profile was filled with posts about Trump’s “Make America Great Again” (MAGA) slogan, rants about the border wall and attacks on the Democratic Party.

Babbitt was also a follower of the fair-right QAnon conspiracy theory – tweeting a day before the riot that, “Nothing will stop us. They can try and try and try but the storm is here.” The “storm” is a central theme of the QAnon conspiracy that holds that Trump was eventually going to conduct mass arrests of the pedophilic, Satanic child sex-trafficking ring that secretly runs the U.S. government.

Babbitt wasn’t alone among Capitol rioters drawn in by the QAnon conspiracy. Photos from January 6 show dozens of “QAnon” and “We are the Storm” signs and shirts in the crowd. The conspiracy also motivated the so-called “QAnon Shaman,” Jacob Chansley, who was photographed confronting police and leading a prayer in the Senate chamber while wearing his signature horned fur cap and carrying a spear.

Chansley, who has been held in custody since his arrest shortly after the riot, has said he now regrets being “duped” by Trump.

“He regrets very, very much having not just been duped by the president, but by being in a position where he allowed that duping to put him in a position of making decisions he should not have made,” Chansley’s attorney said in a January interview.

Like Babbitt, Chansley’s attorney said his client thought he was in D.C. on January 6 “to help the president.”

Babbit’s death sent shockwaves through pro-Trump groups around the country. Some prominent conservatives, including Fox News host Tucker Carlson, have sought to make Babbitt’s death into a political talking point – just as a Trump supporter who thought the Capitol riot went too far told WUSA9 would happen in January.

“It’s just a sad story because people are going to take her and make her a martyr and that incident will radicalize other people,” a Trump supporter from San Diego who only wanted to be known by his first name, Max, told WUSA9.

Babbitt’s husband Aaron said she went to D.C. by herself and he was supposed to pick her up the following Friday. The two met in D.C. while Babbitt was serving in the national guard and living in the Maryland area.