The tale of two Almanacs: What Old Man Winter has in store for central Ohio

A look at the forecasts for the upcoming winter season from the Old Farmer's Almanac and the Farmers' Almanac. 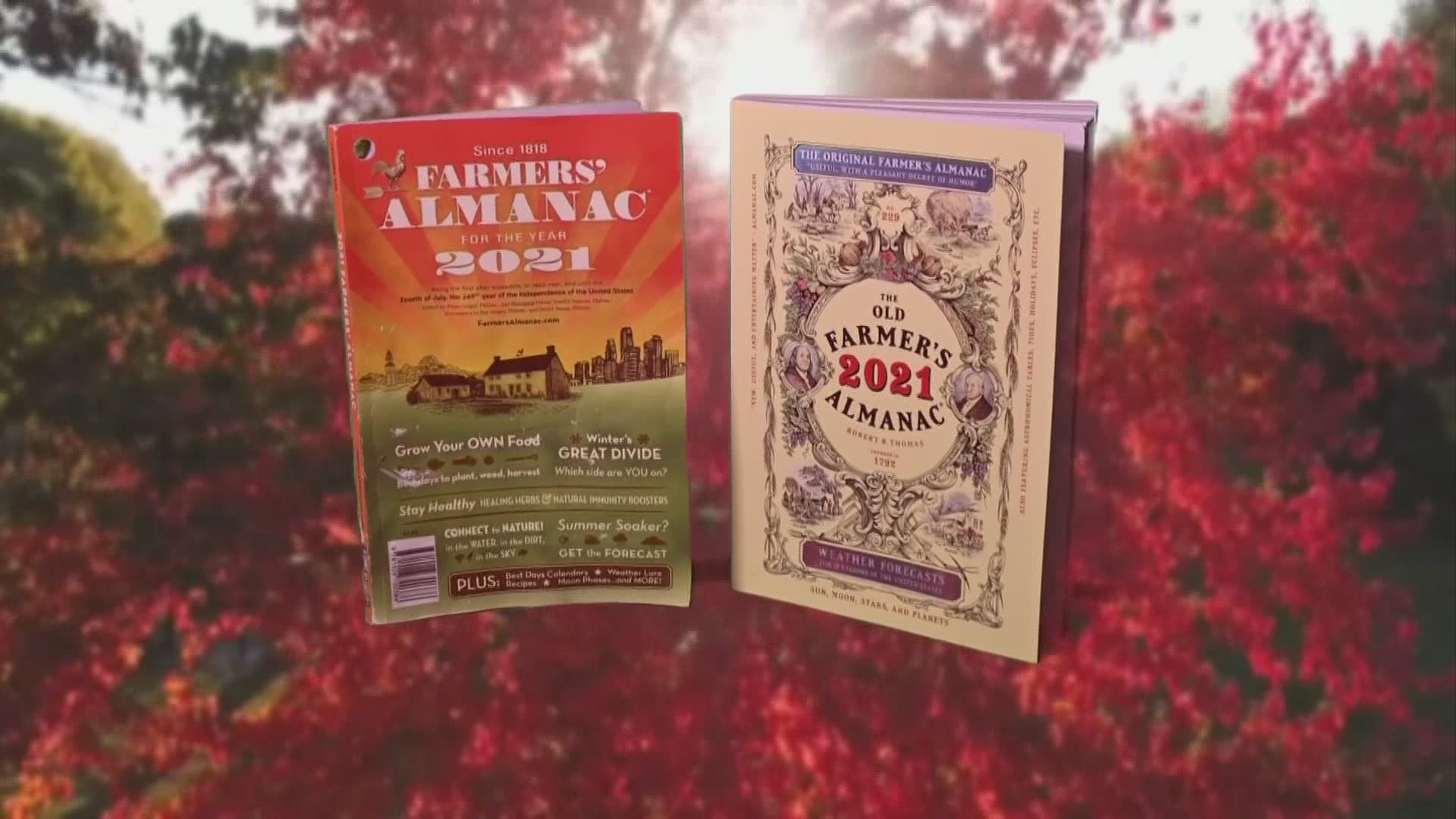 We’ve talked about the history of the Almanacs and the difficulty of long-range forecasting.

Both the Farmers’ Almanac and the Old Farmer’s Almanac don’t just “guess” on what their winter outlooks will be. There’s quite a bit of science taken into consideration along with some weather folklore sprinkled in.

“We do it based upon a mathematical formula developed back by David Young and we apply it to sunspot activity, planet positions, the effect the moon has on the earth and some other components,” said Peter Geiger, editor of the Farmers’ Almanac.

The Old Farmer’s Almanac shares some similarities in their methodology.

“We use solar science, which is the study on the activity on the sun, the sunspots. We look back in time, (at something) called climatology to study and see what the sunspots were like a century or more ago and see what the weather was then. We use meteorology, which is the study of the atmosphere including the jet stream, the ocean temps and land temps. And our meteorologist also takes greenhouse gases in the atmosphere into consideration,” said Old Farmer’s Almanac Editor Janice Stillman.

Both have a designated prognosticator that develops their outlooks using these methods and also a “secret formula.”

Now it’s time to look at what both the Farmers’ Almanac and the Old Farmer’s Almanac have to say about the upcoming winter, specifically, what we could see here in central Ohio.

At first glance, it’s easy to point out that both forecasts differ by color schemes, terminology and forecast regions. Beyond that, the forecast itself is conflicting when comparing the two.

In the Farmers’ Almanac, Ohio is in the “Cold, Very Flaky” region and in the Old Farmer’s Almanac, we’re caught between “More wet than white” and “Not so cold, not too wet.”

The Old Farmers Almanac has Ohio split between the Lower Lakes region and the Ohio Valley—and for good reason. “Our meteorologist Michael Steinberg actually decided the shape and size of each region based on the climatological movement of weather systems,” said Stillman.

With the trajectory of storm systems in the winter months, we would expect that these storm systems would bring cooler conditions that originate from the north and not the south.

“If the weather comes in from the north, look for snow in early to mid and late December and if it comes from the south, you’re looking at the possibility of snow right up against spring.”

In this case, “More wet than white” would mean that we would see a fair amount of precipitation but not all of it would necessarily be snow.” Then areas south of this would then be trending warmer and drier in the Ohio Valley region compared to the Lower Lakes.

Those who put together these outlooks take their forecasts seriously, but they also understand the reality of long-range forecasts and that at the end of the day it’s based on good intentions.

“We don’t believe anyone can be 100% accurate, but I’m going to let you in on a little secret. If you read the forecast for both region six and region seven, I can guarantee you a 160% accuracy rate,” said Stillman jokingly.

Now compared to the Farmers’ Almanac and what they’re calling this years “Winter of the Great Divide.”

A compelling title begs us to ask, what side are we on? The cold and snowy or the warm and dry?

“The west coast is going to be warmer and dry,” said Geiger. "The northern states will be cold and snowy. The tendency is Arkansas and Texas area is going to be very stormy and very mixed kind of weather. You know snow one day sleet the next. It’s going to be a bit of a mess in the middle part of the country.”

When I asked Geiger about us in central Ohio, he chuckled and said, “There’s snow way out of it! You’re going to get the snow and you’ll get the cold.”

Not only do we have a colder and snowier outlook for the upcoming season per the Farmers’ Almanac, but they also forecast certain weather events to occur over the winter season. It's a challenge in forecasting an event so far out in itself, while also claiming a high accuracy rate.

Oh, and by the way, forecasting an event 1-2 years out from occurring takes some skill at the very least or maybe it’s just luck.

At this point you may be scratching your head and wondering, so which forecast do I believe? That’s completely up to you. Not to be too vague, but right now I’d say there’s the possibility to be a little bit of both.

Here’s what the latest science says:

Many of the tools used to aid in predicting the winter season aren’t 100% accurate to begin with. A lot of these scientific methods aren’t well known and don’t perform well this far in advance.

One tool is available though, and that’s the sea surface temperature anomalies near the Equator in the East Central and Eastern Pacific Ocean. Often we refer to this as El Nino (the warming phase) and La Nina (the cooling phase).

The Climate Prediction Center (CPC) has issued a La Nina Advisory and that La Nina conditions are likely to continue through the northern hemisphere this upcoming winter (75%).

In a recent report from the CPC, La Nina conditions have been reported and there’s a good chance it may also linger into the following spring.

These findings are important considering how these changes could impact our weather pattern flow over the upcoming winter season here in the United States.

La Nina tends to shift storm tracks a little further south compared to normal, with the Ohio River Valley region being in a favorable area for winter storms. This places central Ohio just north of what could be a location for many winter storms.

Our last La Nina was back in 2017-2018 and while it was a weak one, we saw near average snowfall during the winter months of December, January and February (Roughly 25” of snow).

The strength of the La Nina during our winter is to be determined but these events typically put us in a favorable area for winter storms.

This outlook may not be exactly what you were hoping for, but it’s the best idea we have available on what our upcoming winter could look like.

The warmer than average fall that's expected could then change to cooler than normal heading into December followed by some typical winter cold with gradually warmer conditions late February into March. Climatology will tell us that our history features most of our snow falling in the January and February months.

You can trust the latest science, the Farmers’ Almanac or the Old Farmer’s Almanac for the upcoming season. Regardless of your preference, we’ll soon find out who nailed this year’s winter outlook.

Don’t forget, there’s more than just forecasting in between these pages. Both almanacs offer a wealth of information aside from weather info, folklore and outlooks.

These publications have been around for a long time and for good reason. They offer insight on the latest tips and tricks, gardening ideas, beauty and health products, astronomy, nature, weather and so much more.

The almanac is for everyone, said Geiger. “Sometimes people think the almanac is for old people and only old people read it. It really is for families, younger people. What we do now is to really try and help young people engage people and be able to do more things for yourself, be smart and be responsible.”

Especially with a year like 2020, we’re all trying to improve ourselves and those around us. That’s a common mission between both publications regardless of their differences in their winter outlooks.

“The book itself has always been about helping people, sharing values if you will, about being good, industries and working hard,” said Geiger.