Wintry mix will pass through central Ohio on Monday

Freezing rain, rain and snow will be possible on Monday, but won’t likely impact Central Ohio until the early afternoon. 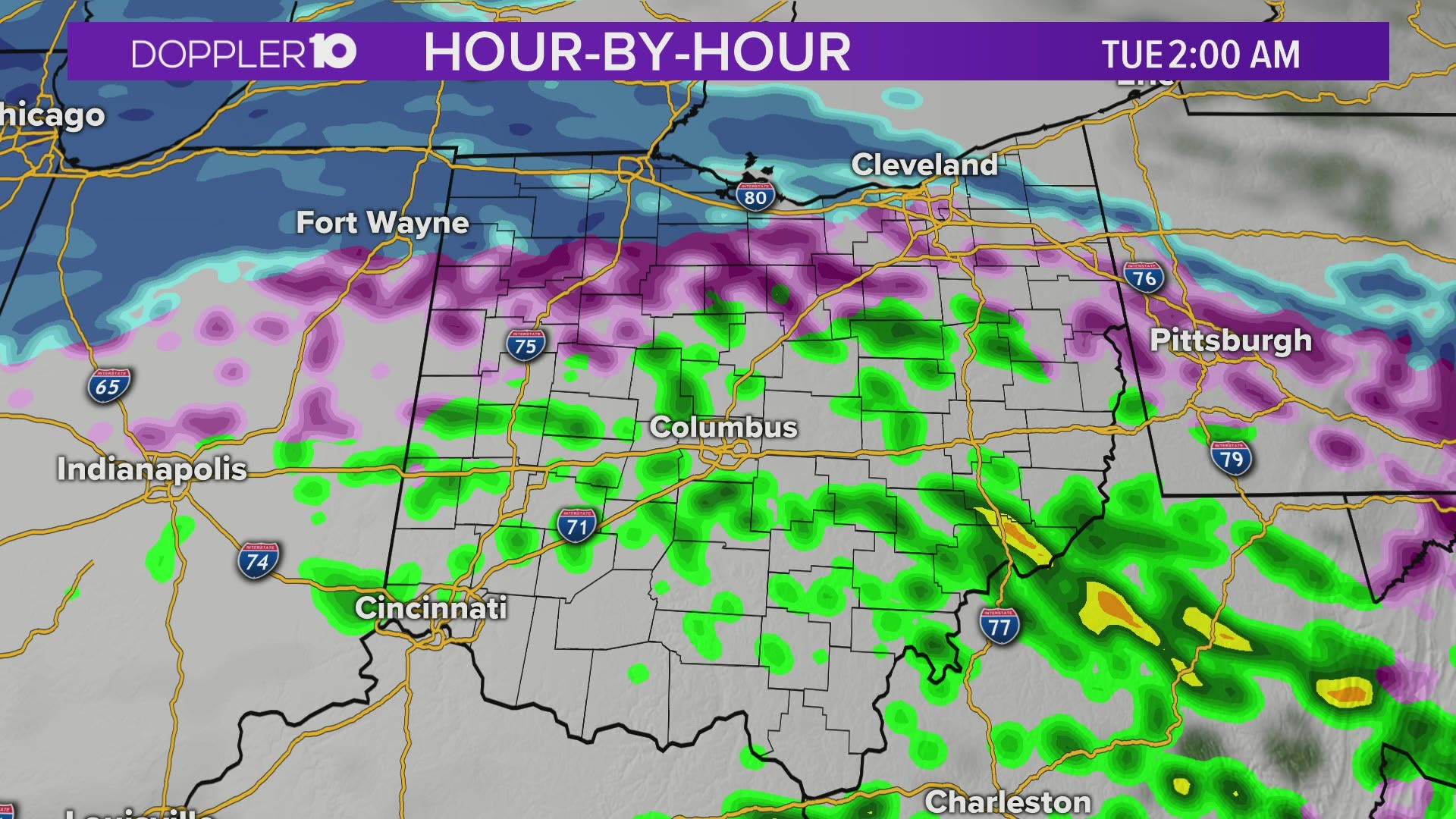 WINTER WEATHER ADVISORY UPDATE: Advisories in Central Ohio are now in effect until midnight due to uncertainty in how fast temperatures warm into tonight. Mixed precipitation will continue with freezing rain leading to light ice accumulations across the region. #10tv pic.twitter.com/RKakzLFhkR

Winter weather advisories have been extended from 6pm to midnight across much of central Ohio.

This is due to temperature uncertainty going into this evening. Temperatures at 5pm are at 32 degrees, with most of Franklin County in the same range.

Even with temperatures at or slightly above 32 degrees, the ground temperatures may be colder and allow for ice to accumulate.

Radar has shown much of the precipitation to get increasingly scattered to start this evening, but a mixed bag of precipitation continues to fall.

Snow, rain and freezing rain will be possibly into tonight. Even if it remains scattered, ice can still accumulate and lead to icy roads.

If you're heading out this evening take it slow, especially driving across Central Ohio.

Another thing to remember is that the slickest surfaces may be from your door to your vehicle, so be careful heading outdoors.

Here comes round #2 of wintry weather for Central Ohio. Watch out for some rain/snow this afternoon, with some light freezing rain in pockets where air temperatures are still below freezing. #10tv pic.twitter.com/ge29sTIpex

Our next chance for wintry weather is arriving through parts of central Ohio. Rain and snow along with some light freezing rain will be possible.

Temperatures are hanging just below the freezing mark, so some light ice accumulations will be possible through the early afternoon in central Ohio.

Winter Weather Advisories remain in effect for much of Central Ohio until 7 p.m. tonight. Most of the icy potential, however, will push through before the evening rush here in Franklin county.

Areas further north of Columbus and into Northern Ohio will see more potential for freezing rain and light ice accumulations as precip continues to fall and temperatures bump down a bit more as the sun begins to set.

Temperatures will climb above the freezing mark later tonight, so there won't be as many widespread slick spots going into Tuesday morning.

Many people in central Ohio are waking up to slick spots across the area as we start the week.

Light freezing rain has hit the area through the overnight hours.

Winter Weather Advisories are in effect in spots and will go into effect across the area throughout the day. That’s because another round of wintry weather is on the way.

It will start to move in for our southern counties by the late morning hours and hit Central Ohio around noon or shortly thereafter.

This will start out as some light ice or sleet before turning to a rain/snow mix and eventually light cold rain by the mid to late afternoon.

Once the sun goes down temperatures will drop enough to warrant a change over to a wintry mix at times through the night.

After the moisture moves out temperatures will be cold enough for some refreeze on the roads.

Tuesday will see a mix early before turning over to some light drizzle through the day.

Here's a look at the forecast for 2PM #Monday. The models have held up the system just a hair with the latest runs. Still expecting a rain/snow mix with some sleet or freezing rain at times this afternoon in Central Ohio. @10TV #10TV #ohwx pic.twitter.com/Mo6PNEOX9N