Trouble in the Tropics: Barry weakens from hurricane to tropical storm status 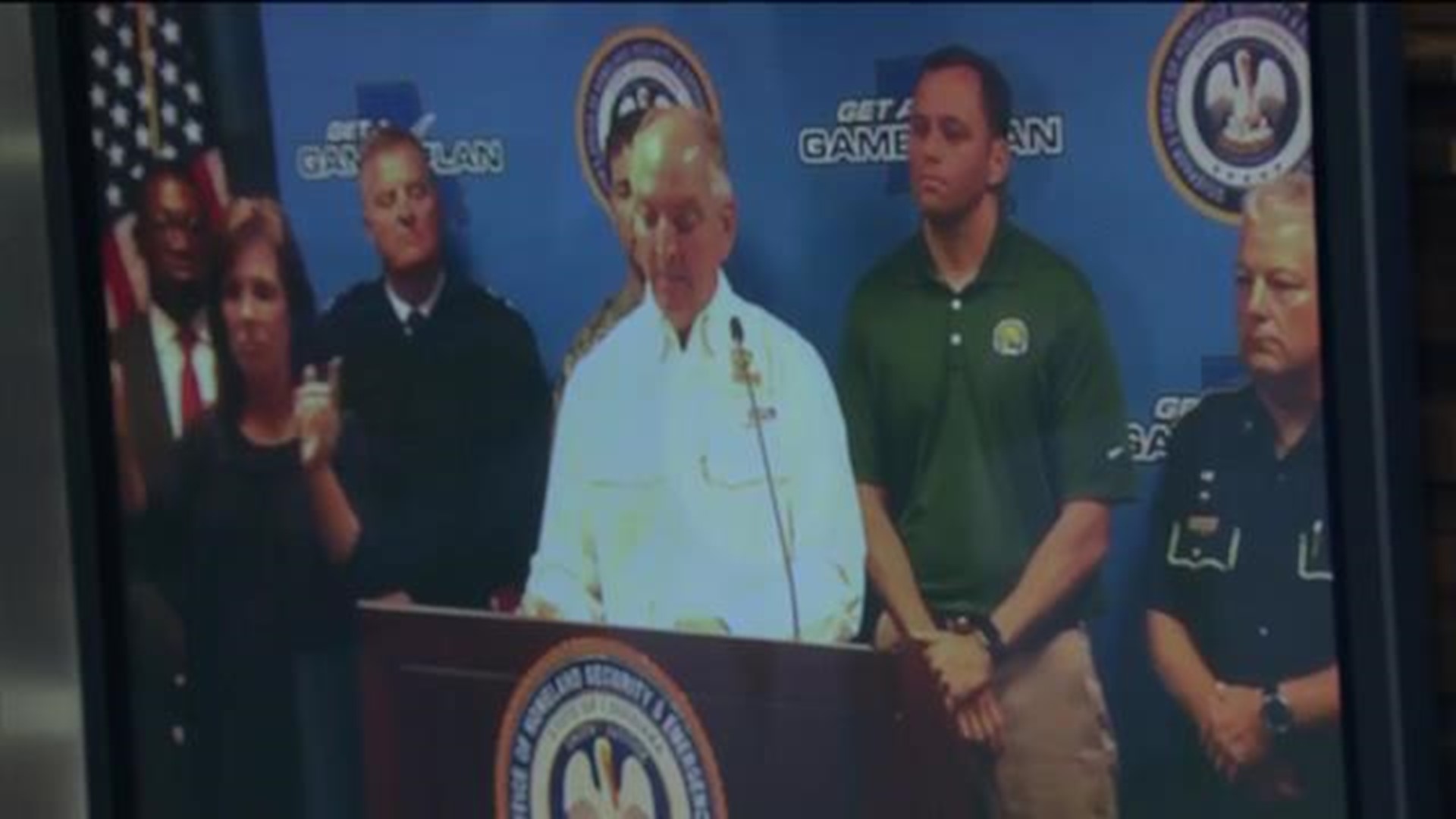 Tropical Storm Barry is west of Alexandra, Louisiana, this morning moving at roughly 8 mph towards the NNW. Still with winds sustained at 45 mph, Barry is a strong storm, which is still tapping moisture in from the Gulf, allowing for life-threatening storm surge inundation along the coast of south-central Louisiana.

Life-threatening flash flooding and significant river flooding are still expected along Barry's path inland from Louisiana up through the lower Mississippi Valley, through at least Monday, according to the NHC.

Widespread rainfall of 4" or more is expected, with embedded areas of significantly heavier rain that will lead to rapid water rises.

The 11 a.m. update on Barry has now reached sustained winds of 75 mph, classifying as a category 1 hurricane while making landfall over the central Louisiana coastline.

Barry is still meandering over the Louisiana Coast but is expected to make landfall by the early afternoon. Below is the latest key messages from the National Hurricane Center(NHC).

Tropical Storm Barry is expected to strengthen to hurricane strength prior to making landfall over the Louisiana coastline later this morning or early this afternoon.

Barry has been meandering over the Gulf of Mexico several hundred miles south of the Louisiana Coast. During this time, we've seen this system gain some strength and is becoming more organized.

Barry is expected to make landfall overall over the central Louisiana Coast early Saturday morning as a category 1 hurricane.

1. There is a danger of life-threatening storm surge inundation along the coast of southern southeastern Louisiana, portions of Lake Pontchartrain, and portions of coastal Mississippi where a Storm Surge Warning is in effect. Water levels are already beginning to rise in these areas, with the peak inundation expected on Saturday. The highest storm inundation is expected between Intracoastal City and Shell Beach.

2. The slow movement of Barry will result in a long duration heavy rainfall and flood threat along the central Gulf Coast, across portions of the Lower Mississippi Valley and north into the Tennessee Valley through the weekend into early next week. Flash flooding and river flooding will become increasingly likely, some of which may be life-threatening, especially across portions of southeast Louisiana into Mississippi.

Earlier on Thursday, the low pressure over the northern Gulf of Mexico has become more organized and has strengthened into what is now called Tropical Storm Barry.

Barry is encountering some wind shear and dry air, which will both act to suppress storm development; but we'll continue to see this system strengthen into a category 1 hurricane before making landfall over the Louisiana Gulf Coast early Saturday morning. As far as impacts for Ohio, it's too early to tell where the exact remnants of this system will go but we could see some clouds and rain from this system sometime later next week.

Areas along the Louisiana Gulf Coast will be dealing with life-threatening storm surge and flooding, with rainfall amounts expected to surpass 15" in spots over the next several days.

Fortunately, we've had a relatively quiet start to the Atlantic Hurricane season, which started on June 1; but all it takes is one big storm to make the season a memorable one.

This system will eventually be given the name "Barry", which is the second named storm of the season. First, it needs to develop into a tropical depression, which is expected to occur within the next 24 hours.

The first, subtropical storm Andrea, wasn't a memorable one because it formed several hundred miles east of Bermuda and dissipated within 24 hours.

Potential Tropical Cyclone Two (Barry) will pose more of a threat, especially along the Gulf Coast. Below is the first of many advisories on what is expected to be a Category 1 Hurricane on Friday.

By Saturday, the system is expected to make landfall over Louisiana. So far, a storm surge watch and tropical storm watch has been issued for part of the Louisiana coast. The forecast path or "cone of uncertainty" represents the potential path of the storm rather than the storm's size.

As you head further in time, the uncertainty in the path of this system grows.

While there is uncertainty in the overall path of the storm, it is with greater confidence that this storm will strengthen quite a bit over the next several days. That is because there are many favorable ingredients in play that will allow for this system to continue to develop.

One of the biggest contributors is the very warm waters over the Gulf of Mexico.

Wind Shear over Gulf of Mexico

Another factor is wind shear or difference in wind speed with height/direction. The lower the wind shear, the better opportunity storm systems like tropical disturbances get to further develop and strengthen.

Another factor is the current placement of high and low pressure, which act as steering currents for storm systems. In this case, this storm is expected to push southwest, west and eventually northwest through the Gulf Coast near Louisiana and western Texas.

While the exact path of the storm isn't clear at this point, there will be significant rainfall and storm surge over parts of the Gulf Coast.

Right now, 3-5 feet will be possible in watch areas and tropical storm conditions will be felt by late Thursday or early Friday. Rainfall amounts could eclipse 18" in spots, with a widespread 6-12" across the central Gulf Coast through next week. More details to come.