Storms move out of central Ohio

Strong storms lingered throughout central Ohio much of Friday afternoon. 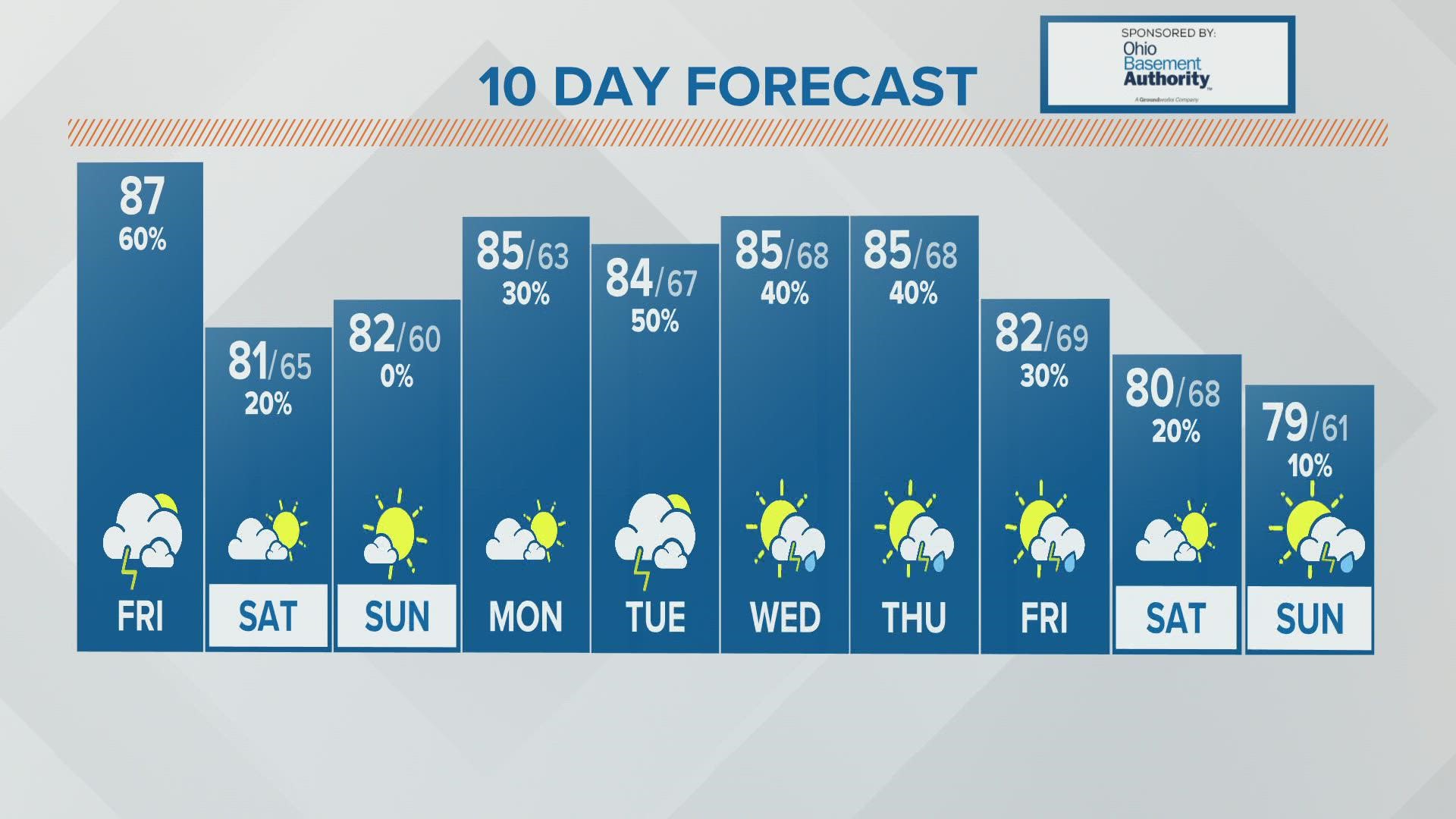 Storms have mostly rolled out of central Ohio Friday evening.

Most of the storms have moved east, but not before leaving a batch of rain with rounds of lightning.

Some showers and storms will linger overnight before the area could see nicer weather this weekend.

To check the map of outages in your area, click the links below:

Doppler 10 Ahead of the Storm
What you need to know when severe weather hits.

Watch
A Watch indicates the possibility of severe weather in a relatively broad area. For instance, a tornado watch means conditions are favorable for the development of tornadoes. Go about your normal routines, but watch for threatening weather.

Warning
A Warning is issued when severe weather is actually occurring. For instance, a tornado warning means a tornado has actually been sighted or has been indicated by radar. The warning usually encompasses a relatively small geographic area. If a warning is issued for the area in which you live, take cover immediately!

TORNADOES AREN'T THE ONLY REASON TO STAY ALERT

Strong Winds
Strong winds of 55 mph or more can cause significant damage even though no tornado is present. "Downbursts" are columns of air that slam to the earth and spread high winds in many directions. Downbursts can be just as damaging as tornadoes; if such conditions are present, take the same precautions as you would for a tornado.

Lightning
Lightning claims more lives every year than tornadoes. When lightning is a threat, stay indoors and don't use electrical appliances. If you're caught outside, keep a safe distance from tall objects, and try to stay lower than anything nearby. A safe distance from a tree is twice its height.

Storms producing tornadoes in Ohio often approach from the southwest. They can travel at speeds up to 70 miles per hour and contain winds estimated at over 200 miles per hour.

Sometimes an approaching tornado will sound like the roar of a train or airplane. If you see or hear a tornado, take cover immediately. Seek shelter inside, preferably below ground level. Do not waste time opening windows; tornado-force winds will "open" the windows well before the pressure difference can cause any structural damage. Above all, protect your head and lie flat.

At Home
Get away from windows, doors and outside walls. Go to the basement. If you have no basement, go to a first floor bathroom, closet or room at the center of the house. If possible, get under heavy furniture and cover your head with blankets or pillows.

At School
Go to the lowest floor or basement. Go to small interior rooms or hallways. Stay away from windows and avoid auditoriums, gyms and other areas with wide, free-span roofs.

In Public Buildings
Go immediately to the designated shelter area or to an interior hallway or small room on the lowest level. Stay away from windows. Do not use elevators. Do not go to your car.

During tornado drills or actual tornado warnings, remember to DUCK

D – Go DOWN to the lowest level, stay away from windows
U – Get UNDER something (such as a basement staircase or heavy table or desk)
C – COVER your head
K – KEEP in shelter until the storm has passed