Snow, sleet & freezing rain: The changes that took place in the atmosphere on Monday

Sleet fell across Ohio on Monday due to a lingering layer of warm air above the surface, which limited snowfall for many 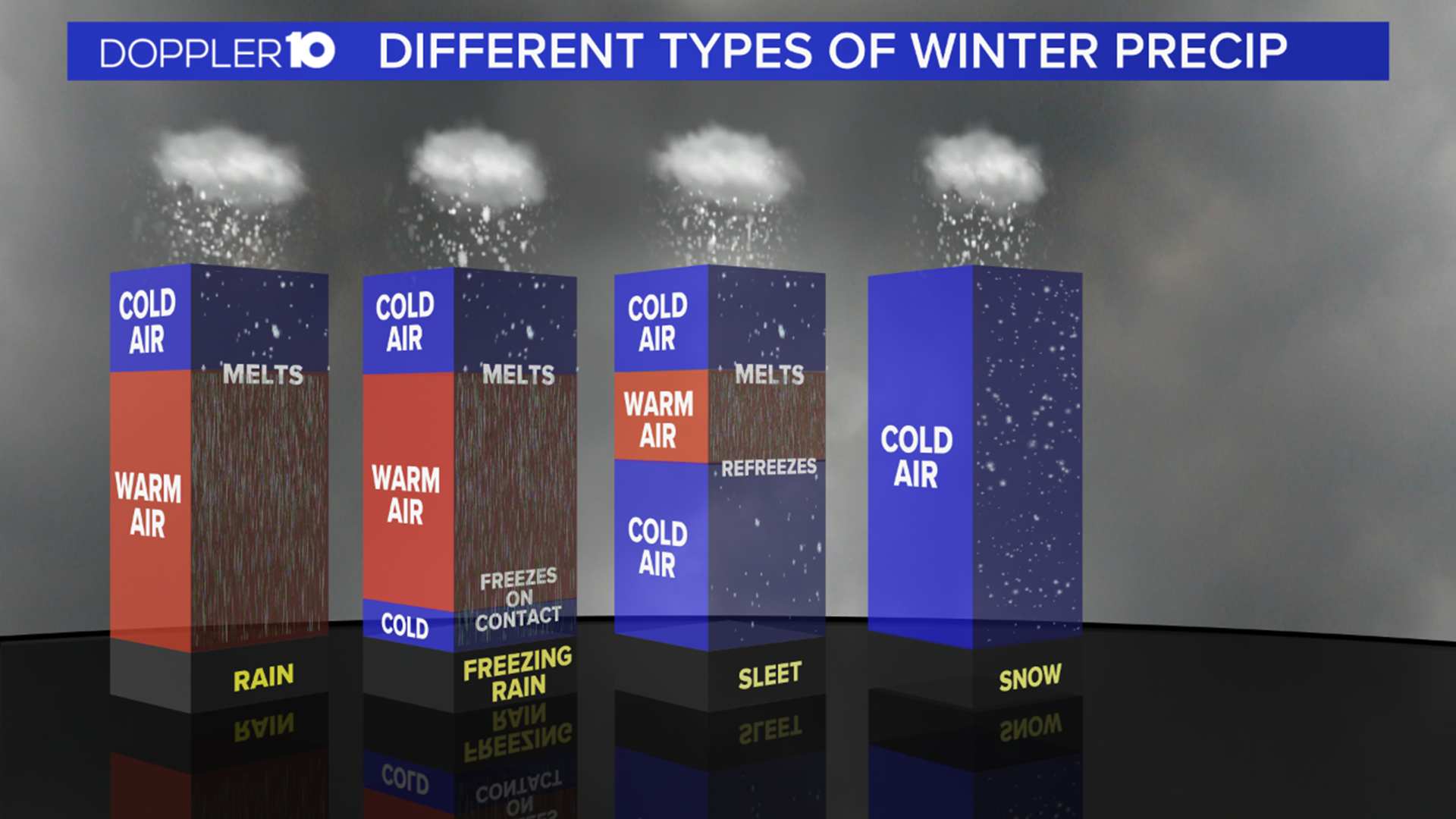 Many of us had this same expression on Monday.

If you looked at the weather radar at any point on Monday, you probably saw what looked to be snow falling, but was actually more sleet than snow on the ground.

First off, there was nothing wrong with the radar and this is another reason why it's always important to have ground truth to verify what's appearing on the radar.

What was seen on the radar was snow, but it was being picked up on the radar beam several thousand feet into the air, which was right above a very warm layer of air.

As that snow fell it melted and then entered another layer of cold air before reaching the ground as sleet or freezing rain in some areas southeast of Columbus.

The further you are from a radar location, the higher the angle of the beam or higher altitude of which the radar is receiving information from, which can get misleading at times if you don't know how the radar works.

[7:28 PM] Our evening weather balloon shows a change in temperature of almost 20°F from the ground to about 6,000 feet up.

That warm air above the ground causes snowflakes to melt or partially melt, and the very cold air below causes them to freeze and become sleet. https://t.co/SpKggHlAUV pic.twitter.com/LtNfE6tpuT

Above is a tweet from the NWS office in Wilmington, Ohio that includes a few photos of their daily weather balloon launches and also a diagram of what data is collected from these balloon launches.

These diagrams look very confusing(and they kind of are), but all you really need to know is that the temperature is on the x axis and the height above the ground is on the y axis.

The red line represents the air temperature and the blue line is the dewpoint temperature. When these lines are overlapping that represents a moist or highly saturated region of air that are associated with clouds and precipitation. The further the lines are apart, the drier the air mass and less likely there is cloud coverage.

The black solid line is showing where 0 degrees Celsius is or 32 degrees Fahrenheit.

These balloon launches occur twice a day and are crucial in collecting real data that is then ingested into weather models to help forecast the weather.

Sometimes more launches may occur during events such as severe thunderstorms or tornadoes to get a better idea of how the atmosphere is as a line of storms move through the area later in the day.

With the event that unfolded on Monday, weather models weren't picking up on that warm air and by the time we got the data from the weather balloons on the warm air advecting in it was already sleeting.

The morning sounding/weather balloon launch on Monday was also still reporting temperatures below freezing throughout the atmosphere and it wasn't being picked up on among most of the models until Monday afternoon.

The Monday evening sounding from the NWS office in Wilmington found that there was an extremely warm layer of air above the surface with temperatures well above freezing. Temperatures near the ground were almost 20 degrees colder, which allowed for some refreezing to occur before the precipitation hit the ground.

Many aren't aware of the drastic temperature changes that can occur in the atmosphere on a daily basis unless it's brought up like during Monday's event.

Even with the lack of snowfall, the sleet and ice was a big issue and didn't really change the impacts across the region.

For those that are still wondering how with the latest technology that we still have "busted" forecasts they need to realize that weather isn't an exact science and it will never be in our lifetime.

Sometimes these drastic changes in the forecast happen as the event unfolds.  It's important to keep up with the forecast when we're dealing with snow and of course, severe weather for the latest information.