Columbus in the top 10 for most gloomy city in America

It should come to no surprise that we see more clouds than sun in Ohio, but you may be surprised just how much cloud coverage we see in a year. 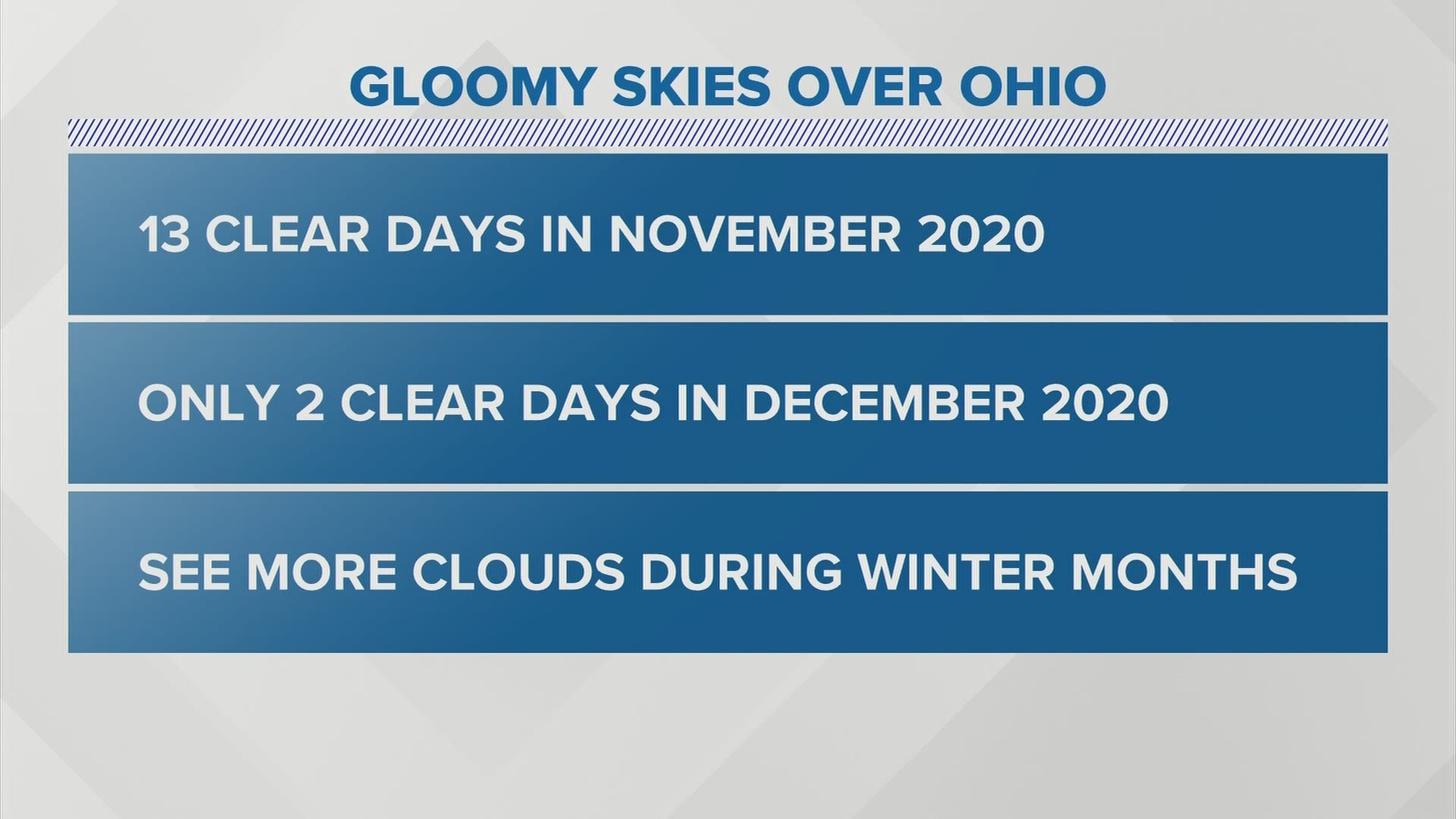 COLUMBUS, Ohio — Cloudy skies seem hard to avoid here in Columbus during the winter months, but have you ever thought about just how many cloudy days we see each year?

If you have spent any amount of time in Ohio, you're probably aware that we aren't known as a sunshine state.

However, it may be surprising to know that Columbus is in 8th place for the most gloomiest city in the United States. Yes, the entire country!

These findings come from move.org where they looked at some of the most populous cities in America and their annual cloud coverage based off data from the National Oceanic and Atmospheric Administration(NOAA).

Columbus isn't the only Ohio city on the list, either. Toledo comes in at #10 and Cleveland is all the way up at #5. On average, Columbus sees about 190 days of gloomy weather, which is over 50% gloomy skies each year!

The Top 10 most gloomy cities are:

In Columbus, we see most of our gloomy weather during the winter months and it makes sense.

Winter features much colder air than the rest of the year, which helps aid in the low-level, expansive cloud decks that we see throughout the winter months.

Credit: NexLab College of Dupage
Cloud coverage over the Great Lakes during a cold, winter afternoon.

Weather disturbances that bring warmer air relative to it's surroundings help aid in cloud develop, which in return could produce precipitation in that of rain, snow, etc.

These disturbances more often that not come in from the NW or W direction, which leads to cooler air being brought into an area and could lead to additional cloud coverage; even after a cold front has passed through.

That leads right into our next huge contributor, the Great Lakes.

Even though we're not as close to the lakes as some other cities, they do influence our weather on a daily basis.

Think of the Great Lakes as a vessel of readily available energy that storm systems can stop by and get some extra fuel as they continue their journey.

Not only are the Great Lakes important, but more so the wind direction over the lakes and the areas that are downwind.

Winds that are out of the E or SE don't cross the lakes before reaching central Ohio, so we don't see any lake-effect.  When winds are out of the N or NW, we get cold air moving over a "warmer" body of water with abundant moisture that helps develop lake effect clouds and even lake effect snow if there's enough of the right ingredients in play.

If you're tired of the gloomy weather and want more sunshine, you might want to take a look at the least gloomy cities from move.org before your next vacation or move.

The Top 10 least gloomy cities are:

All cities in the top 10 see gloomy skies 27% or less of the time or they see sunshine at least 73% of the year.

To see how other cities rank on the gloomy scale, visit move.org.