Scientists aren't sure why the waters in an Indian lake recently and suddenly changed from green to pink. 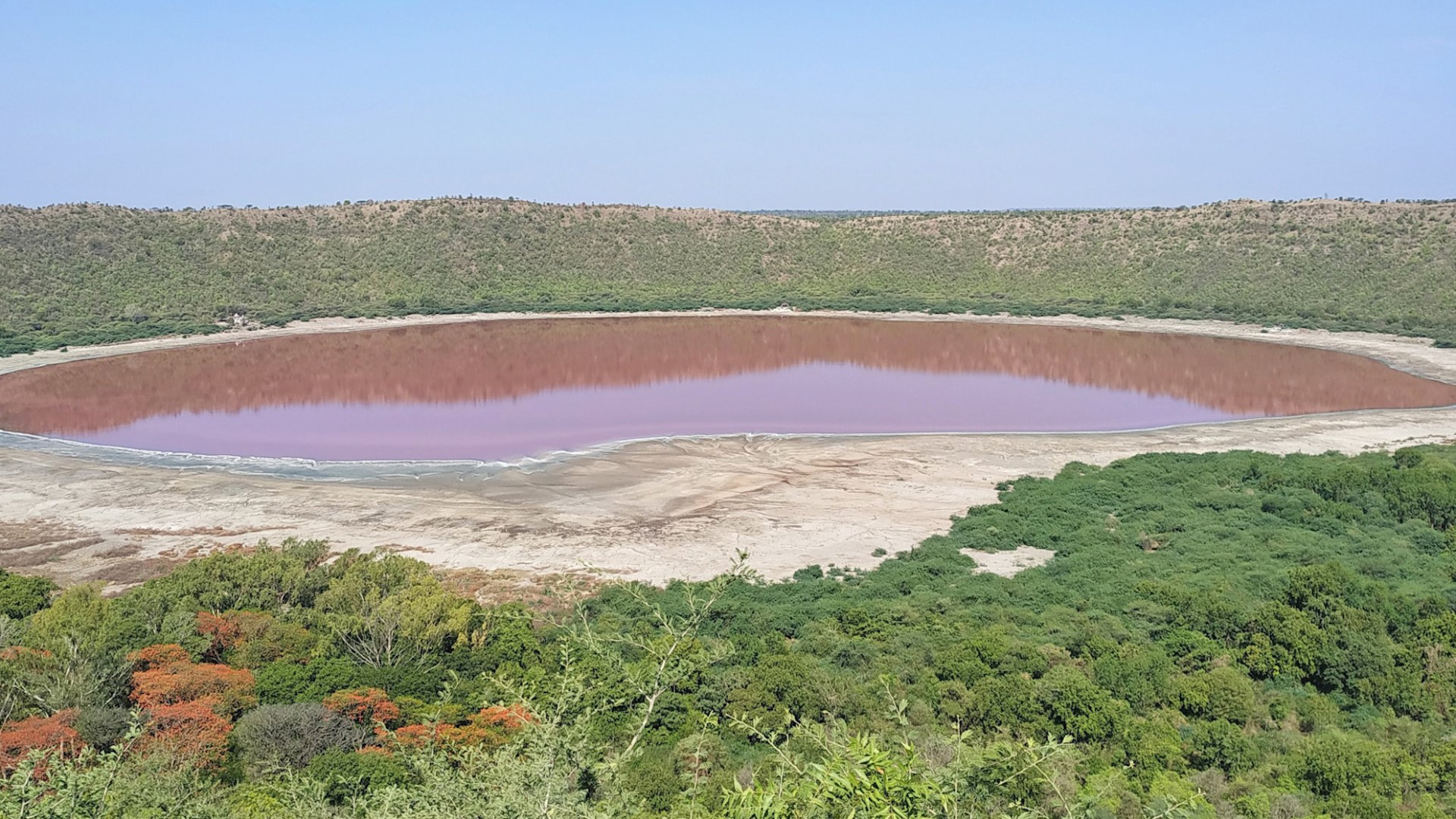 Fifty thousand years ago, a massive meteorite collided with Earth's surface at an unimaginable high speed of 55,923 miles per hour - its impact created a large crater in India that has transformed into a lake over time. Now, scientists are baffled after the lake waters recently and suddenly changed from green to pink.

This isn't the first time that the lake has puzzled scientists. The origins of the lake confused scientists in the past, and some geologists questioned whether it was actually a volcano crater due to its location in a massive expanse of flatland made up of basalt rock left behind volcanic eruptions believed to have occurred 65 million years ago, according to NASA.

However, today scientists have confirmed Lonar Crater is the result of a meteorite impact that occurred between 35,000 and 50,000 years ago, NASA reported.

Lonar Lake is situated in the Buldhana District of Maharashtra, a state located in western India. It is the second-most populous state and includes the country's capital of Mumbai, a financial center and the largest city in India, home to around 20 million people.

Credit: NASA via AccuWeather
A satellite image of Lonar Lake captured on Nov. 29, 2004.

With both saline and alkaline water, geologists, ecologists, archaeologists, naturalists and astronomers have studied the various aspects of this crater lake ecosystem for years.

Hills of ancient ruins and Hindu temples surround the crater lake, which is seven times saltier than seawater. It is known as the world's oldest basaltic rock meteorite crater in the world.

The district, where the lake is located, was once part of the Maurya Empire and then part of the Satavahana Empire.

A document written at about the beginning of the 17th century declares, "These mountains produce all the requisites for making glass and soap. And here are saltpeter works, which yield a considerable revenue to the State, from the duties collected. On these mountains is a spring of saltwater, but the water from the center and the edges is perfectly fresh."

Fast forward thousands of years, this crater lake has become quite the popular tourist attraction, even before turning its bright pink color during the middle of June.

"Eerie place, but in a good way. You have to climb down into the crater to experience it. Small temples along the water's banks. Some destroyed, some still standing," Shanmd from Mumbai, India, said in a Trip Advisor review.

Lonar Lake's salinity is too high for any species to survive, Narendra from Pune, India, said in another Trip Advisor review, adding that "scientists also believe that the water here has curative properties."

Not only is it very salty, but minerals in the lake's soil are also very similar to the minerals found in moon rocks brought back during the Apollo Program, a 2019 study, conducted by the Indian Institute of Technology, Bombay found.

Experts haven't pinpointed the exact reason for the lake's sudden change of color, but they believe that the change can be narrowed down to a few explanations, including a possible increase in salinity of the lake's water, an algae bloom or perhaps a combination of both of these factors.

In a video posted to Maharashtra Tourism's Twitter feed, local Geologist Gajanan Kharat said that this has happened before, but not as prominently.

"My hunch is that this lake has periodic pink algal blooms, maybe not unlike alkali lakes in East Africa and even 'red tides' in the sea," AccuWeather Senior Meteorologist James Andrews said. "Another possibility - even more speculative as I am not a chemist by trade - is the formation of finely suspended iron oxide, or hydroxide, particles as a result of some kind of chemical or pH change."

Other salt lakes like parts of Utah's Great Salt Lake or Lake Hillier in Australia are famed for their pink water, thought to be caused by the combination of algae and a high concentration of salt.