Will you need an umbrella or winter jacket on Halloween? The forecast for Oct. 31

Several areas of high pressure will work together to keep much of the continental United States dry on Halloween. 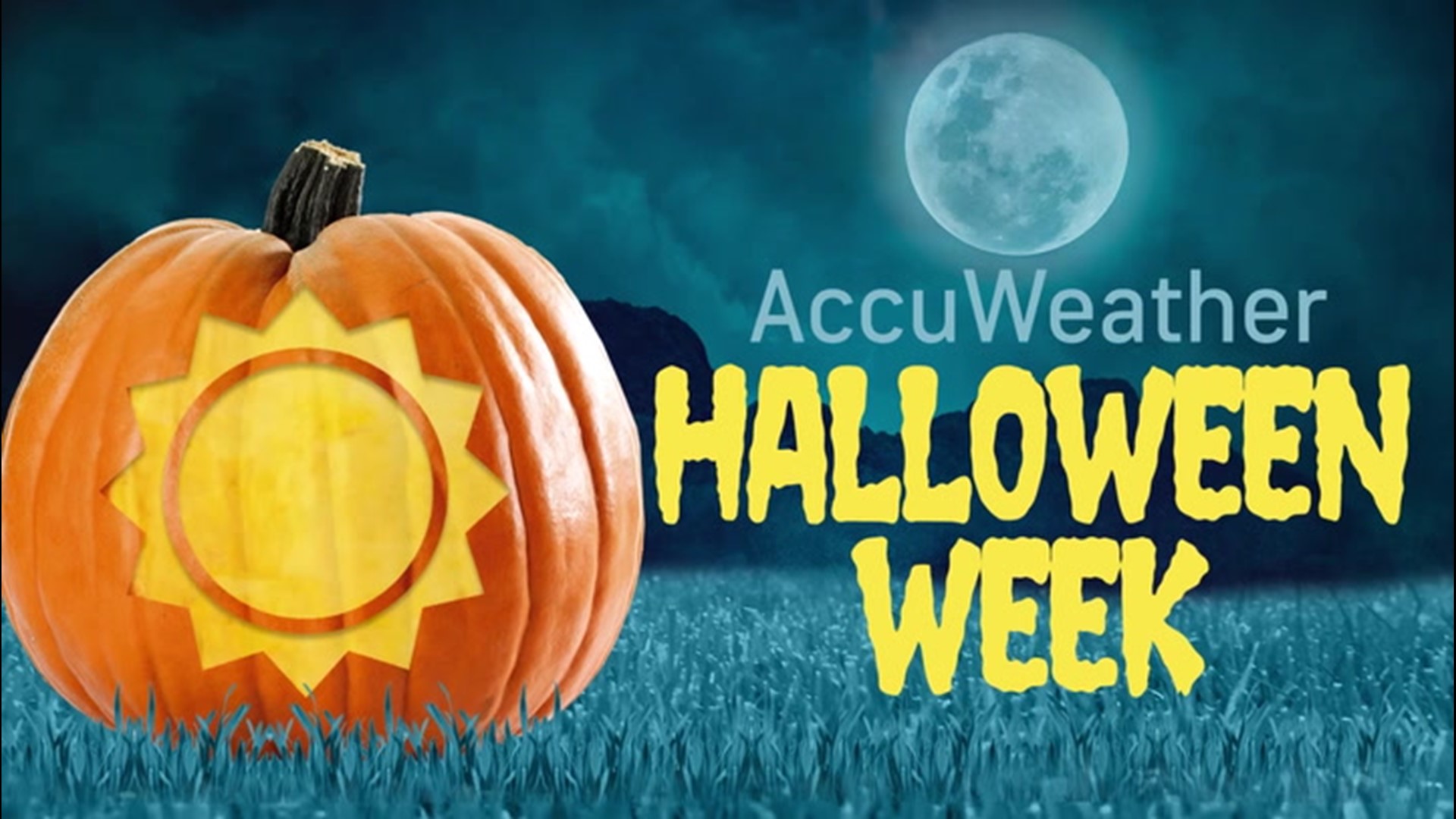 Following a very eventful week filled with snowstorms and tropical systems, Mother Nature will have gotten her share of spooky weather out of her system by the time Saturday rolls around.

This year, several areas of high pressure will work together to keep much of the continental United States dry for those choosing to trick-or-treat on Halloween night.

AccuWeather's Halloween night trick-or-treating outlook will break down where some trick-or-treaters may need a light jacket or others may have to equip extra layers of warm clothing.

The days leading up to Halloween will be rather soggy and dreary across much of the northeastern U.S. as a winterlike storm system and moisture from Zeta join forces.

For any locales from central New York and southern New England, south into Virginia and west into the Ohio Valley that plan on holding trick-or-treat night on Thursday or Friday, wet, chilly weather may hinder participation. Soaking rain will spread across much of the eastern U.S. in earnest beginning on Thursday. Heavy rain will target areas from the Ohio Valley to the Delmarva Peninsula region and may lead to flash flooding, especially in low-lying or poor-drainage areas.

This system will continue to move across the region on Friday. Some areas like those in the mountainous areas of central and northern Pennsylvania and southern New York may even receive some snow mixing in with rain on Friday.

However, good news is in store for those venturing outside to trick-or-treat on Saturday evening. High pressure will build across the eastern third of the country on Saturday as messy weather pushes north and east off to sea. While dry weather will keep people from reaching for the umbrella, some may need to reach for a coat to venture outside Saturday evening.

Under partly to mostly clear skies, temperatures will fall several degrees by the time it is time to head out to trick-or-treat. Residents, especially those across New England and New York should consider putting on an extra layer or two under their costumes.

Like their neighbors up north, a soggy week is in store for much of the Southeast leading up to the big night on Saturday. The same tag-team of a winterlike storm system and tropical moisture from Zeta will eventually drench the Northeast starting Thursday, and will take aim at the Southeast beginning Wednesday.

The surge of tropical moisture from Zeta will interact with a significant amount of energy from the same storm that brought widespread icing to portions of Texas and Oklahoma early this week. This interaction will create a widespread heavy rain event across much of the eastern half of the United States.

Any locales planning to hold their trick-or-treat nights as early as Wednesday or Thursday, may have to reschedule as the Southeast is in for a real soaker.

After a rather soggy week in the Southeast, all signs point to a dry, mainly clear night for those heading outside on Halloween.

"Although the Southeast will be dry in the wake of wet weather related to Zeta, it will be a chilly evening with temperatures running as much as 10 degrees Fahrenheit below normal," AccuWeather Senior Meteorologist Heather Zehr said.

Saturday, high temperatures in the upper 50s to 60s will be common across much of the Southeast. The exception will be those living across the southern tiers of Alabama and Georgia, where highs in the 70s will be more common. The 80s will be the norm across the Florida Peninsula.

"Most areas will have clear skies, though the coastal Carolinas, southern Georgia and Florida will have some clouds crossing the sky" Zehr added.

With these sky conditions, temperatures will be able to fall rather quickly after the sun sets. Outside of Florida, a brisk evening will likely be in store for residents across the region. Those unaccustomed to the unseasonable chill may need to add a few outer or under layers to their costume.

Dry and cool weather is in store for much of the north-central U.S. on Halloween night as high pressure dominates the area. Conditions on Saturday are not forecast to be nearly as extreme as the record-shattering cold that occurred this past weekend, as seasonable temperatures are on deck for many residents.

"An area of cold high pressure deepening over the northern High Plains on Saturday will prompt trick-or-treaters in places like Casper, Wyoming, to bundle up to keep the cold at bay," AccuWeather Senior Meteorologist Mike LeSeney said.

Although Saturday night will cause some in Casper, Wyoming, to shiver, the city has been no stranger to the cold this week. On Sunday evening, the mercury dipped to a brutal minus 8 degrees, shattering the previous record low for the day of 12, set back in 2002.

High temperatures on Saturday will generally climb into the 40s from the northern High Plains to the Upper Midwest, while 50s will be common across the rest of the region. For cities like Minneapolis where high temperatures struggled to even reach the freezing mark this past Saturday, a seasonable high temperature in the low 50s will likely be welcome.

"Thankfully, there isn't even the ghost of a chance for any snow in the High Plains, despite the abnormally chilly weather," LeSeney added.

While there is a negligible chance for snow in the High Plains, some residents of a few states along the northern tier of the Midwest may want to keep their eyes to the sky on Saturday.

A storm system is forecast to trek from central Manitoba, Canada, to western Ontario, Canada throughout the day Saturday. While the bulk of the snow associated with this system is set to stay north of the border, a few flurries on Halloween night will not be out of the question for residents of northern Minnesota, northern Wisconsin and the Upper Peninsula of Michigan.

As sloppy weather continues to pummel the South Central states for much of the week, Friday will bring welcome relief for many residents across the region. High pressure will begin to build over the region on Friday morning as adverse weather shifts into the eastern third of the country. This high pressure will remain in place on Saturday, ushering in dry but seasonably cool conditions.

As the sun sets, temperatures will drop a few degrees across the region, making for a chilly night of festivities for some residents. However, for some residents along the Gulf coast, a chilly evening may be the least of their concerns.

Unfortunately, portions of Louisiana and Mississippi will have to deal with yet another direct hit from a tropical system at midweek. Zeta will bring another round of heavy rain and damaging winds to already battered communities across the two states starting late Tuesday and continuing through Thursday. Residents in the area who may want to go trick-or-treating may find that another round of damage cleanup and power outages alters their plans.

Good news for prospective trick-or-treaters: seasonable and dry conditions are on tap across the Northwest on Halloween night! High pressure, coupled with a slight northward bulge in the jet stream, will work together to keep temperatures at, or even a few degrees above normal across the region.

Under mostly clear skies, temperatures will fall rather quickly once the sun sets, allowing for a seasonably brisk evening for many trick-or-treaters across the region. While some residents may find the evening a bit chilly, the level of chill will be nothing compared to what transpired early in the week.

Many temperature records were broken on Sunday and Monday, especially for cities in proximity to the Rockies. Daily low temperature records fell across portions of Montana, Wyoming and even into portions of the Southwestern states. For example, Salt Lake City, Utah, broke a 142-year-old record Monday morning when the mercury dropped to 19 degrees Fahrenheit.

While Halloween night is forecast to be dry and chilly for most across the nation, the one portion of the country set to experience unseasonably warm conditions in addition to the helping of dry weather is the Southwest.

Unseasonable heat has been the norm so far this year for many across the southwestern U.S., especially for those living in California and in the Desert Southwest. While the warmth in store for this Saturday will be dwarfed when compared to the level of the most recent heat wave, temperatures will still trend 5-8 degrees above normal for the end of October.

By the time many locales kick off their trick-or-treating events, temperatures will have fallen a few degrees to comfortably cool levels for most.

In Phoenix, where many long-standing temperature records have fallen so far this year, conditions will be comfortable for trick-or-treaters. Even after sunset, temperatures will be in the low 80s to upper 70s for those who choose to participate in the spookiest of holidays.