A long streak of rocket debris from SpaceX was seen from Snohomish County to Salem, Oregon Thursday night. 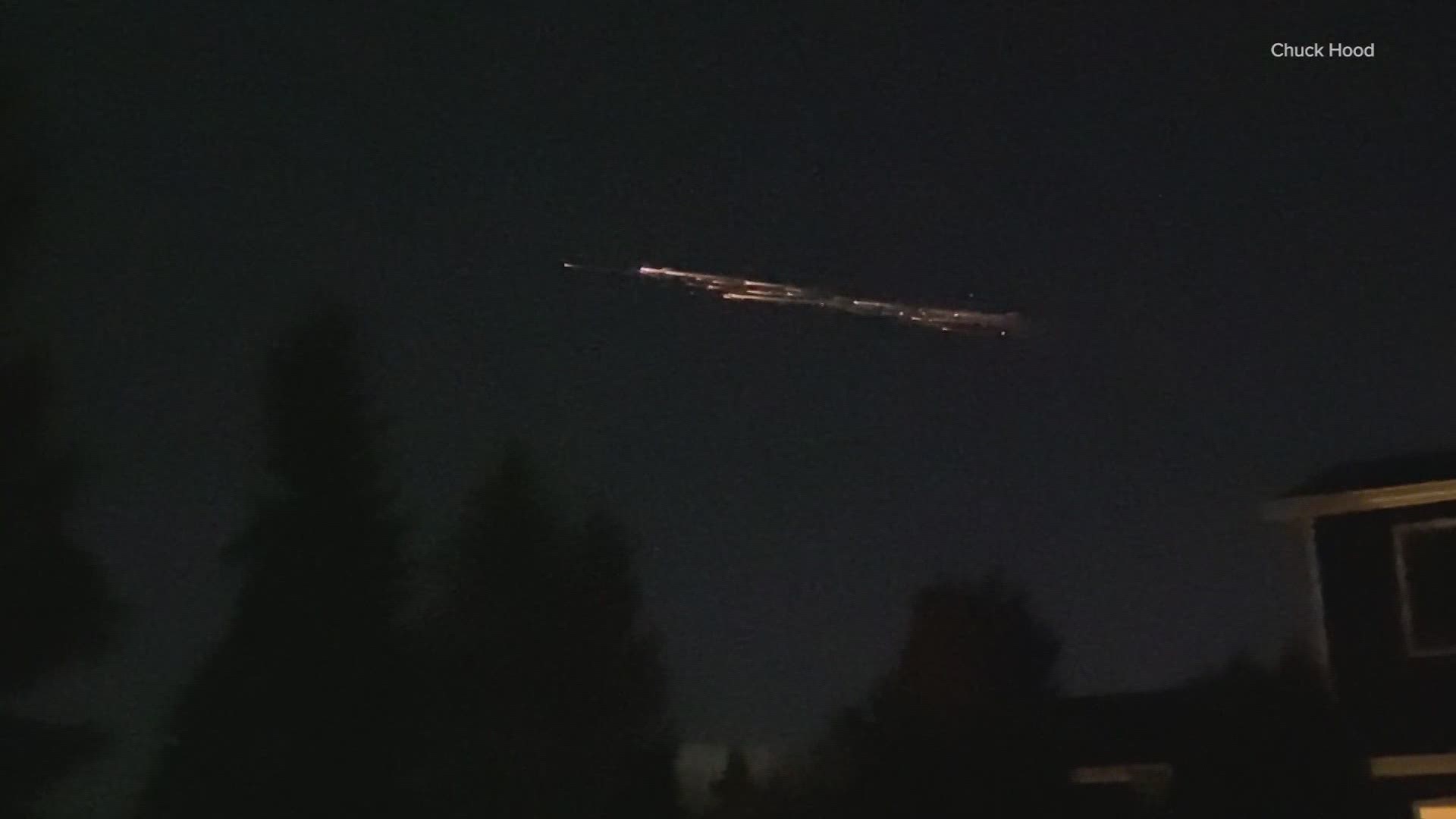 A surprise lightshow in the sky above Seattle drew eyes and questions Thursday night, and experts say it was human-caused.

Long streaks of light appeared around 9 p.m., lasting about a minute, visible from Seattle to Portland. In videos posted to social media, many speculated the event was a comet or meteor shower, among other more fantastic things.

“I don’t believe in aliens, but for a minute, I thought, ‘Okay, this is happening,’” laughed Annie Kimsey, who captured video of the lights streaking by the Space Needle. “I mean, 2020 was crazy. 2021 is just trying to beat that."

But experts believe there’s a more terrestrial explanation: debris from a SpaceX rocket burning up as it sped through the upper atmosphere.

“What really set off our intuition that it wasn’t a meteor was that it’s moving so slowly and that it was in the sky for a long time, just sort of tracking there,” said Dr. James Davenport, a University of Washington professor of astronomy.

Jonathan McDowell, an astronomer at the Center for Astrophysics, also pointed to the SpaceX rocket stage on Twitter, sharing an image of the returning craft’s path. SpaceX has not commented on the incident or responded to requests from KING 5.

Davenport said, while the Falcon 9 booster is famously designed to land remotely on a drone ship for reuse, this later stage is intended to burn up in the atmosphere after delivering its payload. However, he believes its de-orbit burn was not successful, during which the craft turns tail-first and fires its engine to slow its speed and drop to earth. That error brought the debris into the atmosphere above a populated area -- instead of the ocean, Davenport said.

That meant a lot of people, many armed with cameras, got to witness a view that usually happens out-of-sight.

Among them, Stephen Vilke on Bainbridge Island, who captured an image of the entire visible flight. His minute-long video shows the bright spot appear on the horizon, then scatter into many streaking points of light before fizzling out. He also believes another angle captured the craft briefly skipping off the atmosphere just before the main event.

“Years ago, I used to work for NASA,” he said. “So I think there’s a little bit of astronomy in all of us, I think, and you know anytime you see something like that come off the atmosphere and bounce it, it just reminds us of the difficulty of what we’re trying to achieve.”

“Astronomy is a science that doesn't belong to anyone. Anyone can go outside with clear skies and appreciate and take part of that exploration and that journey and that wonder," he said, also referring to the 2017 solar eclipse and Neowise comet visible last summer. "So when you connect us to the stars like that, that's wonderful."

But he notes the Starlink program poses an important and controversial environmental issue. The sheer volume of satellites SpaceX plans to launch (about 1,000 to date, with thousands more planned) has raised eyebrows in research circles, because the devices reflect light and can interfere with the sensitive instruments and telescopes used to study the faint signals of the far-reaches of the universe.

Alarms went off following the launch of Starlink hardware, though SpaceX says it modified the technology to reduce reflection of light.

Still, Davenport said there will have to be a balance between the broadband project and preserving the ability to use existing scientific instruments going forward.

For the moment though, Kimsey reflected on the human aspect of the incident: People all across the Northwest looking skyward at the same thing, sharing a moment of awe.

“Then it makes you realize, you know, the Earth is huge, but at the same time you see a lot of the same stuff, and it’s so small,” Kimsey said. 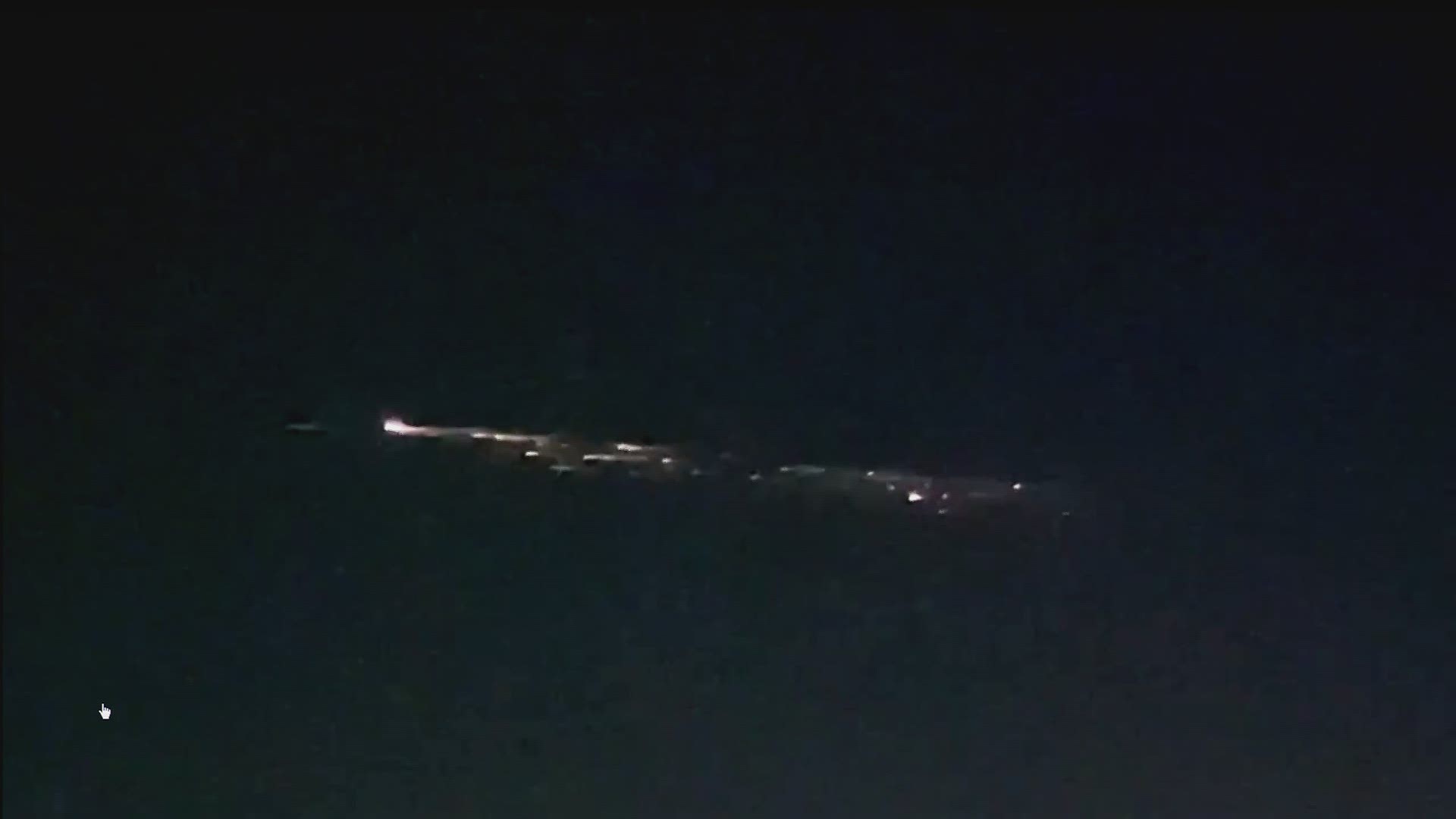