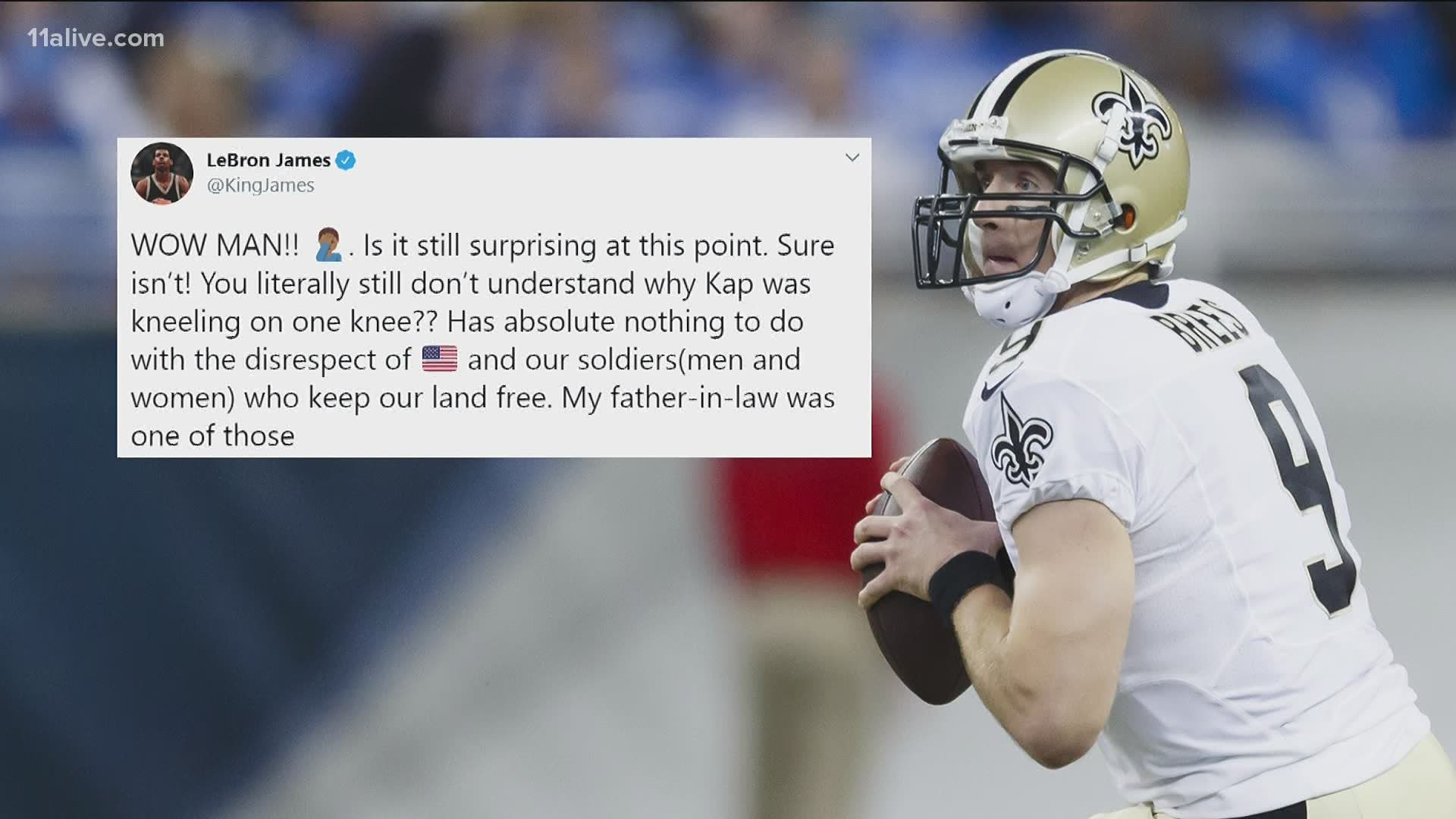 ATLANTA — The death of George Floyd, the man who died after a Minneapolis police officer knelt on his neck, has steered the national conversation once again to race in America.

Floyd's death, just the latest in a multitude of such incidents of black Americans dying during interactions with police officers, set off national protests and pleas for tangible change in policing from people from all walks of life.

The conversation, like it has in the past, also included the voices of athletes, as teams, brands and leagues denounced the actions of the officers involved in Floyd's death.

But while some were praised for their responses, some, like New Orleans Saints quarterback Drew Brees', drew criticism. The famed NFL player was speaking to a Yahoo! News reporter about the current events when a question was asked about players kneeling during the national anthem to protest police brutality in America.

"I will never agree with anybody disrespecting the flag of the United States of America or our country," Brees said.

Brees said when he hears the National Anthem, he thinks of his two grandfathers who fought in the military during World War II who fought to protect the U.S. and to try and "make our country and this world a better place."

"So every time I stand with my hand over my heart, looking at that flag and singing the national anthem, that's what I think about, and in many cases it brings me to tears," he said. "Thinking about all that has been sacrificed ... not just those in the military, but for that mater those throughout the Civil Rights Movement of the 60s. And all that has been endured by so many people up until this point.

"And is everything right with our country right now? No, it's not," Brees continued. "We still have a long way to go. But I think what you do by standing there with your hand over your heart is, it shows unity. It shows that we are all in this together, we call all do better and we are all part of the solution."

His comments prompted the name of rival quarterback Matt Ryan to trend on Twitter, as people drew comparison's to the responses of the two players.

Ryan shared his thoughts Friday on Floyd's death, writing on Instagram that he knows he "cannot fully understand the depth and complexity of these issue because of the color of my skin," adding that he is "committed to doing what I can" to do to learn.

Ryan's posts inspired pride in many Falcons fans, who applauded him for using his platform to denounce racism.

Even some Saints, disappointed by Brees' comments, said they respected Ryan.

Bernice King also tweeted about the comments saying "this is the kneeling Drew should be bothered by". She posted photos of people kneeling on the necks of others.

Across the nation, athletes and their leagues are being encouraged to use their platforms to call for change, as 11Alive's Alex Sports pointed out in a special commentary that many teams - often made up of a majority of black athletes - benefit from their success.