VERIFY: Explaining the difference between 'lying in state' and 'lying in honor'

Capitol Police Officer Brian Sicknick will lie in honor, starting Tuesday evening at the Capitol Rotunda. He is just the fifth American to be honored in this way. 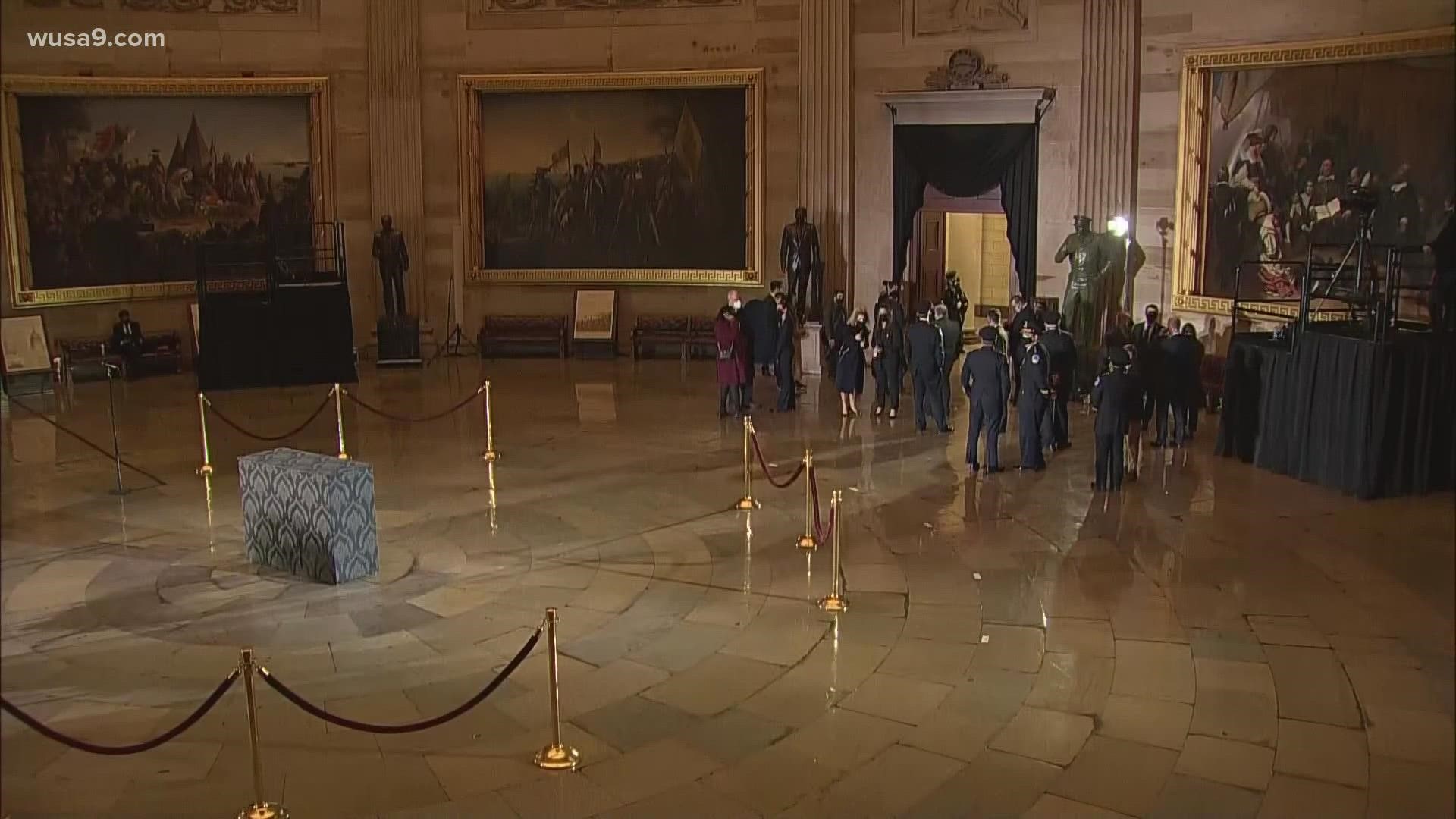 What does lying in honor mean, and how does it differ from lying in state? Who has received this tribute in the past?

Lying in honor is a tribute offered to private citizens who have "rendered distinguished service to the nation." Government officials and military officers lie in state instead.

Officer Brian Sicknick will be the fifth person to lie in honor in the Capitol Rotunda, following Billy Graham, Rosa Parks, and two Capitol Police officers who died in the line of duty in 1998.

In the aftermath of the deadly insurrection on Jan. 6, fallen US Capitol Police officer Brian D. Sicknick will lie in honor in the Capitol Rotunda. The announcement was made via a statement from Congressional leadership.

The family of Officer Sicknick confirmed the news via a statement on the U.S. Capitol Police website.

"The family of U.S. Capitol Police Officer Brian D. Sicknick thanks the Congressional leadership for bestowing this historic honor on our fallen American hero," the statement read.  "We also wish to express our appreciation to the millions of people who have offered their support and sympathies during this difficult time. Knowing our personal tragedy and loss is shared by our nation brings hope for healing."

This evening, Officer Brian Sicknick will lie in honor beneath the Capitol Rotunda

12-year member of the Capitol Police

According to the Congressional statement, the ceremonial arrival will take place Tuesday night, January 2, at 9:30 p.m. on the East Front of the U.S. Capitol building. There will be a viewing period at 10 p.m. for members of the U.S. Capitol Police.

Members of Congress will be able to attend a viewing period Wednesday morning, January 3,  from 7 a.m. to 9 a.m. There will also be a Congressional tribute that Wednesday morning at 10:30 a.m.

At noon on Wednesday, there will be a ceremonial departure before Officer Sicknick will be interred at the Arlington National Cemetery.

What does it mean to lie in honor, and how is it different than lying in state?

Lying in honor is a tribute that only a select few have received in American history. This tribute is offered to private citizens that have "rendered distinguished service to the nation," according to the Architect of the Capitol.

Lying in state is a tribute offered to former government officials and military officers. This includes presidents, lawmakers, and other notable figures.

"Since Henry Clay in 1852, the U.S. Capitol has been used as a place to pay tribute to the Nation's most distinguished citizens," read a description on the website for the History, Art & Archives for the U.S. House of Representatives.

According to The Architect of the Capitol, there is "no law, written rule, or regulation" specifying who qualifies for this tribute. The two chambers must pass a concurrent resolution, allowing access to the Rotunda.

RELATED: Here's the difference between 'lying in state' and 'lying in repose'

Before Officer Sicknick, just four people have received this tribute:

The deaths of Officer Chestnut, Jr. and Detective Gibson followed a tragic shooting at the Capitol on July 24, 1998. The events of that day were described as follows by the History, Art & Archives of the U.S. House of Representatives:

"An armed assailant stormed past a U.S. Capitol security checkpoint, mortally wounding Officer Chestnut. In the initial crossfire between the gunman and Capitol Police, a gunshot injured a tourist. As congressional aides and Capitol visitors sought cover, the assailant ran toward a door that led to the suites of then-Majority Whip  Tom DeLay of Texas. Detective Gibson, a member of DeLay’s security detail, told aides to seek cover. Gibson and the assailant exchanged gunfire. Although fatally wounded, Gibson’s action enabled other officers to subdue the gunman."

According to this account, the House and Senate then authorized a concurrent resolution for the officers to lie in honor in the Capitol Rotunda.

To see a full list of those who have 'Lain in State' or "Lain in Honor," click here. This list includes presidents from Abraham Lincoln to George H.W. Bush, lawmakers, judges, and many others.