Police said they determined the incident appeared to be more of an emotional break or anxiety attack than anything else. 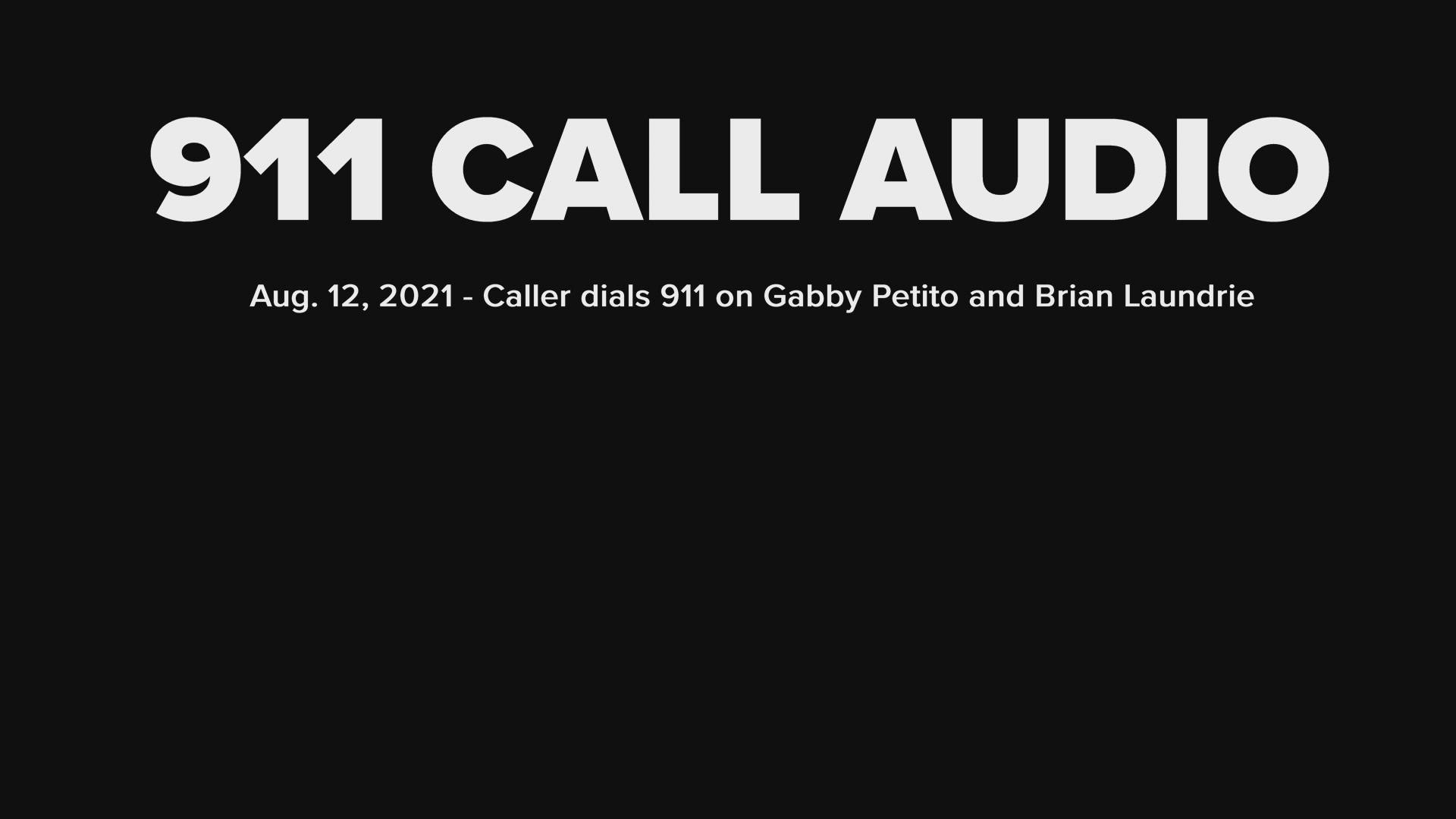 UPDATE (Sept. 23, 2021): A federal arrest warrant was issued for Brian Laundrie following a grand jury indictment in connection with the Gabby Petito case. Click here for the latest information.

UPDATE (Sept. 21, 2021): The Teton County Coroner's Office did a forensic examination on Tuesday and determined the body found in Wyoming belonged to Gabby Petito. Her death has been ruled a homicide. Click here for the latest updates.

Newly obtained audio from a 911 call in August reveals a more sinister side to a reported domestic dispute between Gabby Petito, 22, and fiancé Brian Laundrie, 23, during their cross-country trip.

Back on Aug. 12, police pulled Petito and Laundrie over after receiving reports of possible domestic violence.

Authorities determined the incident was more of a mental health crisis. They said a witness told police he saw the two arguing over a phone.

Laundrie told officers he recommended Petito take a walk and calm down. But she apparently didn't want to get separated from him or be left without a ride in Moab.

So, police say she went to slap him. Laundrie pushed her away to avoid the slap, police determined. But, according to the remarks in the body camera video, it appears she lightly scratched his face.

Police said there was no evidence Laundrie struck Petito. However, a 911 call paints a different picture.

The caller said he witnessed Laundrie slapping Petito inside their van. He added that the couple got out of the car and "ran up and down the sidewalk" before Laundrie struck Petito.

Police said they stopped the van after seeing it going about 45 mph in a 15-mph zone near Arches National Park. The van swerved out of its lane and hit a curb while being stopped near the park entrance, according to law enforcement.

Bodycam video showed Petito was crying when the first officer walked up. There were no significant injuries to either Petito or Laundrie. No charges were pressed. Police said they determined the incident appeared to be more of an emotional break or anxiety attack than anything else.

Weeks after the incident, Petito's family reported her missing. Laundrie returned home to North Port, Florida, without her and refused to speak to law enforcement.

On Sunday, authorities announced a body found in the section of Wyoming's Bridger-Teton National Forest matches the description of Petito. Full forensic testing is still needed to confirm the identity. An autopsy will be conducted Tuesday.

Laundrie is considered a person of interest in the case but his whereabouts are unknown.

Read the full transcript of the 911 call below:

Dispatcher: “Yeah, I can hear ya.”

Caller: “Hi, um, I’m calling – I’m right on the corner of Main Street by Moonflower and we’re driving by and I’d like to report a domestic dispute. Florida – with a white van – Florida license plate, white van, gentlemen about 5-6…”

Dispatcher: “Where’s it at?”

Caller: “They just drove off. They’re going down Main Street. They made a right onto Main Street from Moonflower…the cooperative”

Dispatcher: “And what were they doing?”

Caller: “What did you say?”

Dispatcher: “What were they doing?”

Caller: “We drove by, and the gentleman was slapping the girl.”

Dispatcher: “He was slapping her?”

Caller: “Yes, and then we stopped. He ran up and down the sidewalk. He proceeded to hit her, hopped in the car and they drove off.”

Dispatcher: “Okay, and you said it’s a white van?”

Caller: “White van. I can give you the license plate if you give me one sec. I took a picture of it.”

Dispatcher: “Okay, what kind of white van? Like a big one?”

Caller: “Umm, it was a smaller van with a license plate of – it was white – Florida license plate QFTGO3. It was, the make, was a Ford model with transit. Black ladder on the passenger side.”

Dispatcher: “And where did they? So they turned, they headed south on Main Street from Moonflower Market?”

Caller: “Correct, they made the right turn.”

Dispatcher: “Oh, so they went north?”

Caller: “North, yes sorry I’m not from around here.”

Dispatcher: “Okay, so you’re right there by the post office?”

Caller: “Right across the street, yep.”

Dispatcher: “Okay, and when they turned onto Main Street, they went right or left?”

Dispatcher: “Right, so they went north. North on Main. Alright, I’ll let somebody know, thank you.”

Caller: “Yeah, no worries, thanks.”