Ohio’s Democratic senator, along with a few Democratic representatives, are calling on the vice president and Cabinet to remove President Trump. 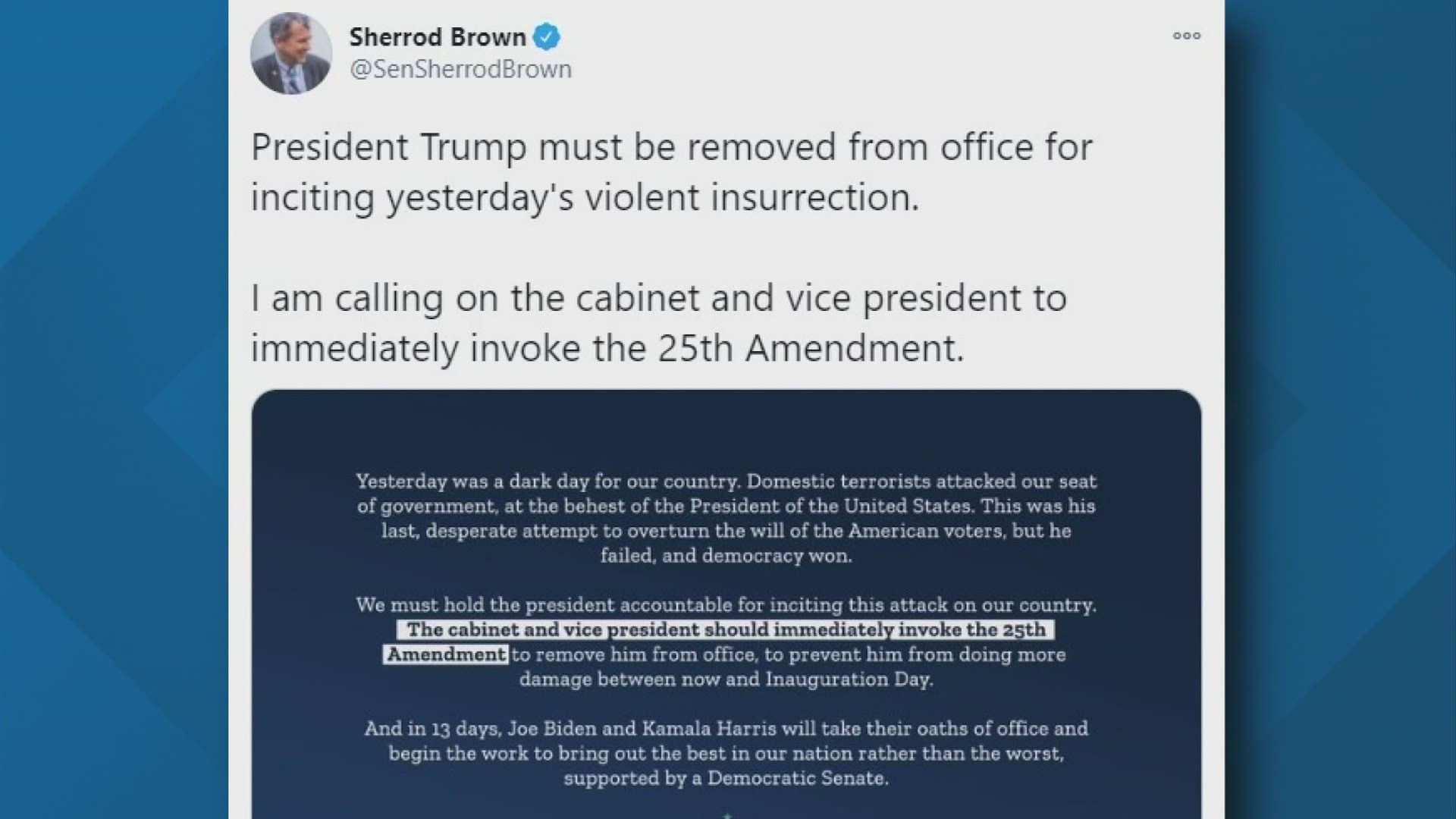 Almost as soon as the violence was over on Capitol Hill Wednesday, the blame game began.

Many pointed fingers directly at President Trump for inciting the violence of the mob that broke into the Capitol building and chambers of Congress.

It did not take long for lawmakers and others to call for either the impeachment and removal of President Trump or invoking the 25th Amendment.

Sen. Sherrod Brown released a statement on Thursday, adding his voice to the mix.

“Yesterday was a dark day for our country. Domestic terrorists attacked our seat of government, at the behest of the President of the United States. This was his last, desperate attempt to overturn the will of the American voters, but he failed, and democracy won. We must hold the president accountable for inciting this attack on our country. The cabinet and vice president should immediately invoke the 25th Amendment to remove him from office, to prevent him from doing more damage between now and Inauguration Day. And in 13 days, Joe Biden and Kamala Harris will take their oaths of office and begin the work to bring out the best in our nation rather than the worst, supported by a Democratic Senate.”

On a telephone press conference Thursday, Rep. Beatty said the Congressional Black Caucus, which she now leads, also will be joining in submitting a resolution for impeachment.

“I think that he has placed this nation and people in harm’s way,” she said. “I think he is dangerous. I think that he is having a very difficult time with losing the election, and we saw yesterday in his remarks, to what he said in inciting those thugs, rioters to come to the Capitol. The deaths of those individuals, I feel so strongly about this, is on the hands of Donald Trump.”

No Republican lawmakers from Ohio had made such calls for removal as of late Thursday evening.

Congressman Bill Johnson, R-6th District, talked with 10TV by phone on Thursday and condemned the violence, but he did not go further than that.

“The president has announced that he is committed to an orderly transition of power,” Rep. Johnson said. “He’s going to be out of office in a little more, about ten days, so I think that we’ll put this period behind us. The ones that should be held accountable, rather than looking at pointing fingers, we need to press charges on those that participated in this.”

Rep. Johnson was one of five Ohio lawmakers who voted to reject the electoral vote count after the violence was over on Capitol Hill.

“This was a constitutional, legal, lawful process that members are required to do, and I would not be upholding my oath of office had I not taken that seriously, and I can’t just look the other way because mobsters and rioters decided to take the law into their own hands and attack our Capitol,” he said.