The letter was signed by nearly 70 members and families in Upper Arlington, which is where Husted lives.

Members of Upper Arlington's Asian Community penned a letter to Lt. Gov. Jon Husted Wednesday, citing their concerns with his “Wuhan virus” tweet and their fears for the safety of their children.

The letter was signed by nearly 70 members and families in Upper Arlington, which is where Husted lives.

“Our children have been targeted for bullying and abuse in the district well before the start of the COVID-19 pandemic, but that abuse has increased significantly in the last 14 months and has reached levels that have brought news media attention to our doorsteps," the letter continued. “Our children are the classmates, friends, and neighbors of your children. 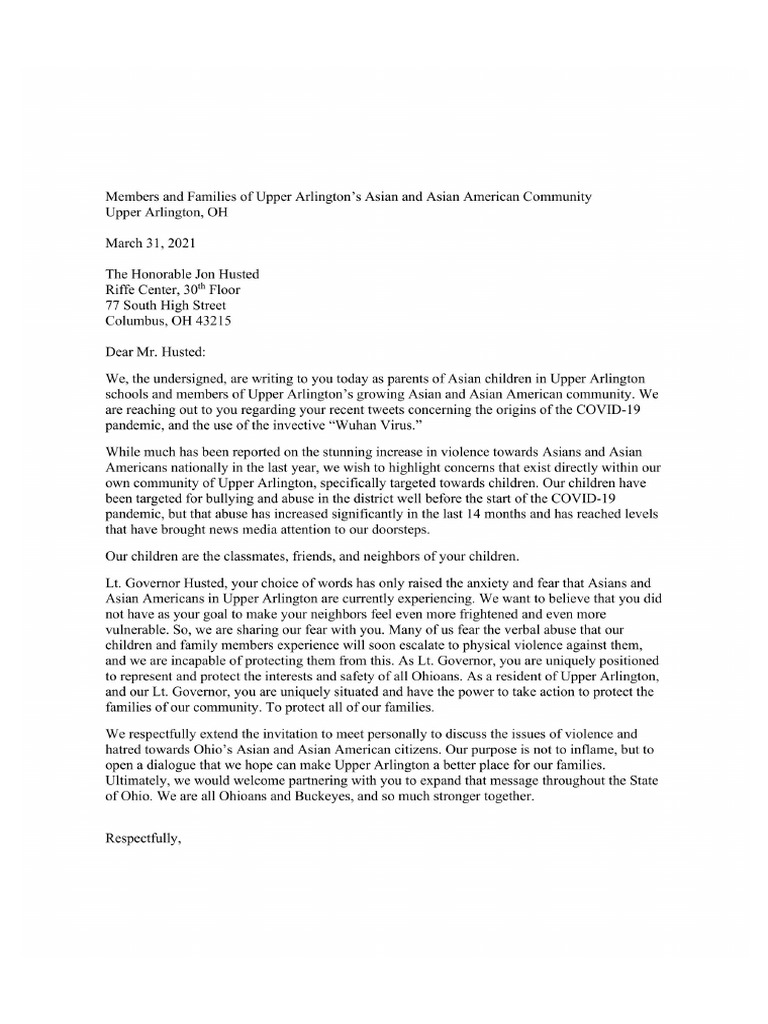 It came in response to a March 26 tweet where Husted linked to an article in which Robert Redfield, the ex-director of the Centers for Disease Control and Prevention, said, without citing evidence, that he believed the virus originated in a lab in Wuhan.

“So it appears it was the Wuhan Virus after all?” Husted tweeted Friday from his personal account.

His intention with the tweet, Husted said in an interview with The Associated Press earlier on Wednesday, was to criticize the Chinese government.

“I was just pointing out that this is an international crisis, in my opinion, that the Chinese government is responsible for and I wanted an independent investigation,” he said. “So I wasn’t trying to accomplish anything that the political left or political right thinks that I might have from that tweet other than to draw attention to the issue.”

The claim that COVID-19 originated in a lab in Wuhan has been scrutinized in the past year by health officials, including the leading U.S. infectious disease specialist, Dr. Anthony Fauci.

The claim was further muddied when a draft obtained by The AP on Monday and formally published Tuesday from the World Health Organization’s inquiry said it was “extremely unlikely” that the virus emerged accidentally from a Chinese laboratory and was likely spread from animals to humans.

Some replies on the original post supported Husted for standing up to China. More numerous were critical replies from Twitter users who said such rhetoric feeds into hate and violence against Asian Americans and Pacific Islanders.

The organization Stop AAPI Hate released a report last month that showed it received more than 3,800 reports in the U.S. of episodes ranging from shunning and verbal harassment to assault from March 2020 to Feb. 28 of this year. Many of the confrontations were linked to misconceptions around the virus.

A gunman walked into three spas on March 16 in the Atlanta area, killing eight people, six of them Asian women, though police have yet to designate the shootings as a hate crime. The shock was still fresh when a man was caught on surveillance video Monday in New York City kicking an Asian American woman and stomping on her face while, police say, he shouted anti-Asian slurs.

For Democratic State Sen. Tina Maharath, the first Asian American woman elected to the Ohio General Assembly, Husted's tweet was the second time that week she heard an elected official call the coronavirus that first emerged in Wuhan, China, the “Wuhan virus,” she said.

Maharath said Husted and others are following the lead of former President Donald Trump, who sometimes used overtly racist terms to refer to the virus.

“When you say those things, such as attach locations or ethnicities to the disease, it creates racial profiling, and then it turns into xenophobic behavior,” Maharath said. “And when leaders with that kind of power repeat those terms in confidence and double down on it, it leads to more hate crimes.”

“We called it the Wuhan virus because that’s where it came from,” Johnson said. “We always called viruses by where they came from, but now we don’t even do that because of all this political correctness.”

In the past century, international health experts have intentionally avoided naming diseases after the city or region of origin because of potential stigma. In 2015, the World Health Organization issued guidelines that discouraged the use of geographic locations, animals or groups of people in naming diseases.

But Husted remained firm in his AP interview.

“On Twitter, there were a lot of people who are from what I will call the cancel culture, who immediately assumed that there was a racial element to the tweet," Husted said, “which there wasn’t any.”

His neighbors, however, believe Husted's words matter, regardless of intention, and offered an invitation to “meet personally to discuss the issues of violence and hatred towards Ohio’s Asian and Asian American citizens.”

When asked for a comment on the letter, a spokesperson for Husted said he has no further comment beyond his previous statement on March 27.