Gov. Kemp: Focus is on running Georgia, 'not what somebody's tweeting'

The governor responded to critiques lobbed by President Trump in a press conference on Wednesday. 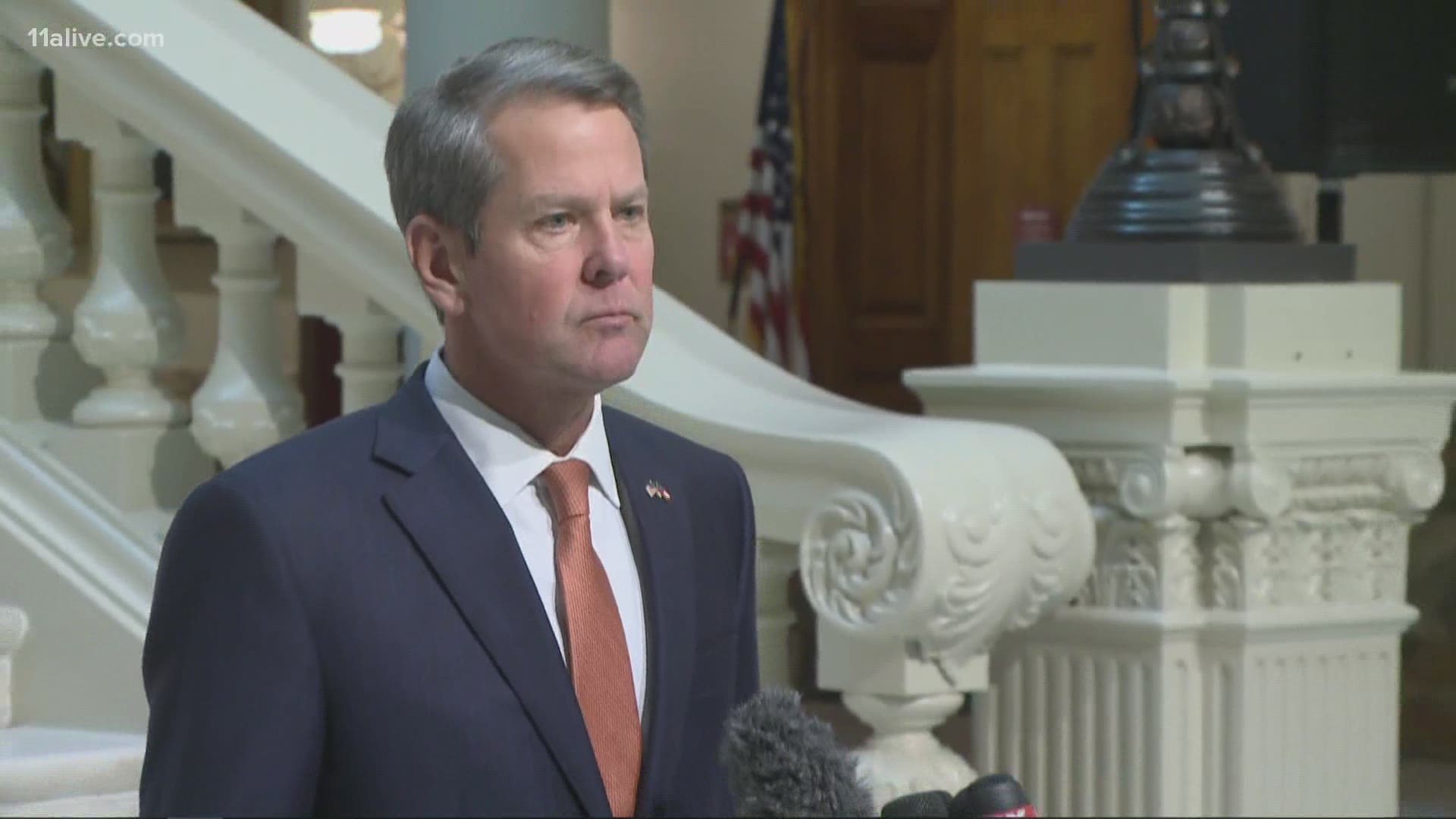 ATLANTA — Gov. Brian Kemp said Wednesday his focus was on running Georgia, focusing on the state's COVID-19 response and trying to get Sens. Kelly Loeffler and David Perdue re-elected, "not what somebody's tweeting."

The governor held a press conference this afternoon after earlier this morning President Donald Trump again targeted Gov. Kemp on Twitter, calling him an "obstructionist" and saying he should resign.

It was the latest in a string of ongoing invective directed at Kemp by the president, who has previously called him a "RINO" (Republican in name only) and "so-called Republican."

Nevertheless, the governor has steadfastly expressed his support for the president, crediting him for Operation Warp Speed and the production of a COVID-19 vaccine and endorsing his calls for a signature audit of absentee ballot envelopes in Georgia.

The governor said again Wednesday that, "I've supported the president," and "worked as hard as anybody in the state on his re-election up through Nov. 3" as well as the legal process that followed.

But, Kemp added, "at the end of the day I also have to follow the laws and constitution," in a reference to Trump's repeated calls for the governor to call a special session of the state legislature - the purpose of which would have been to re-write Georgia election law so that hand-picked Electoral College voters could have voted for the president.

"I've done the things that I can do under the power I have by our laws and constitution of our state," Kemp said.

He framed the ongoing matter with Trump a "distraction."

He said his focus was on "what the people of Georgia want me focused on, and that is making sure if they need a hospital bed they're gonna get one."

"And I've been focusing politically on the most important question we've seen in our state and country in a long time, and that is sending David Perdue and Kelly Loeffler back to the United States Senate to save this country from socialism," Kemp added.

The governor also took aim at Rudy Giuliani, the president's legal advocate who was again at the State Capitol today as part of a state Senate Judiciary subcommittee hearing on election fraud, which featured testimony from individuals who support his conspiracy claim that the election was rigged in favor of Biden through the nefarious use of Dominion voting machines.

The broad contours of that conspiracy have been presented in state and federal courts around the country, including in Georgia, and have so far universally been rejected.

Giuliani called the recently conducted signature audit in Cobb County, which was led by the Georgia Bureau of Investigation, a joke.

Kemp said, "well that's a joke," and defended the integrity of the Cobb audit and the GBI.

"He doesn't know the Georgia Bureau of Investigation very well. He doesn't know how hard they have gone after street gangs and human traffickers to save our children, to keep people from getting shot in broad daylight, their cars carjacked - he should do a little more due diligence on the fine men and women that we have at the GBI."

Kemp also alluded to Giuliani being rude to state troopers working security at the Capitol.

"And for that matter him giving Georgia State Troopers that are working the Capitol grounds a hard time when he's trying to figure out where the committee meeting is, we don't appreciate that down here in Georgia. That's not how we treat people," Kemp said. "They may do that in New York, but that's uncalled for. These are the finest people you could ever meet in your life, that literally have been putting their life on the line, that literally work 12 hour days doing the signature match. These people are professionals."