We're answering your questions about the 2020 general elections. Have a question to submit? You can do that here too. 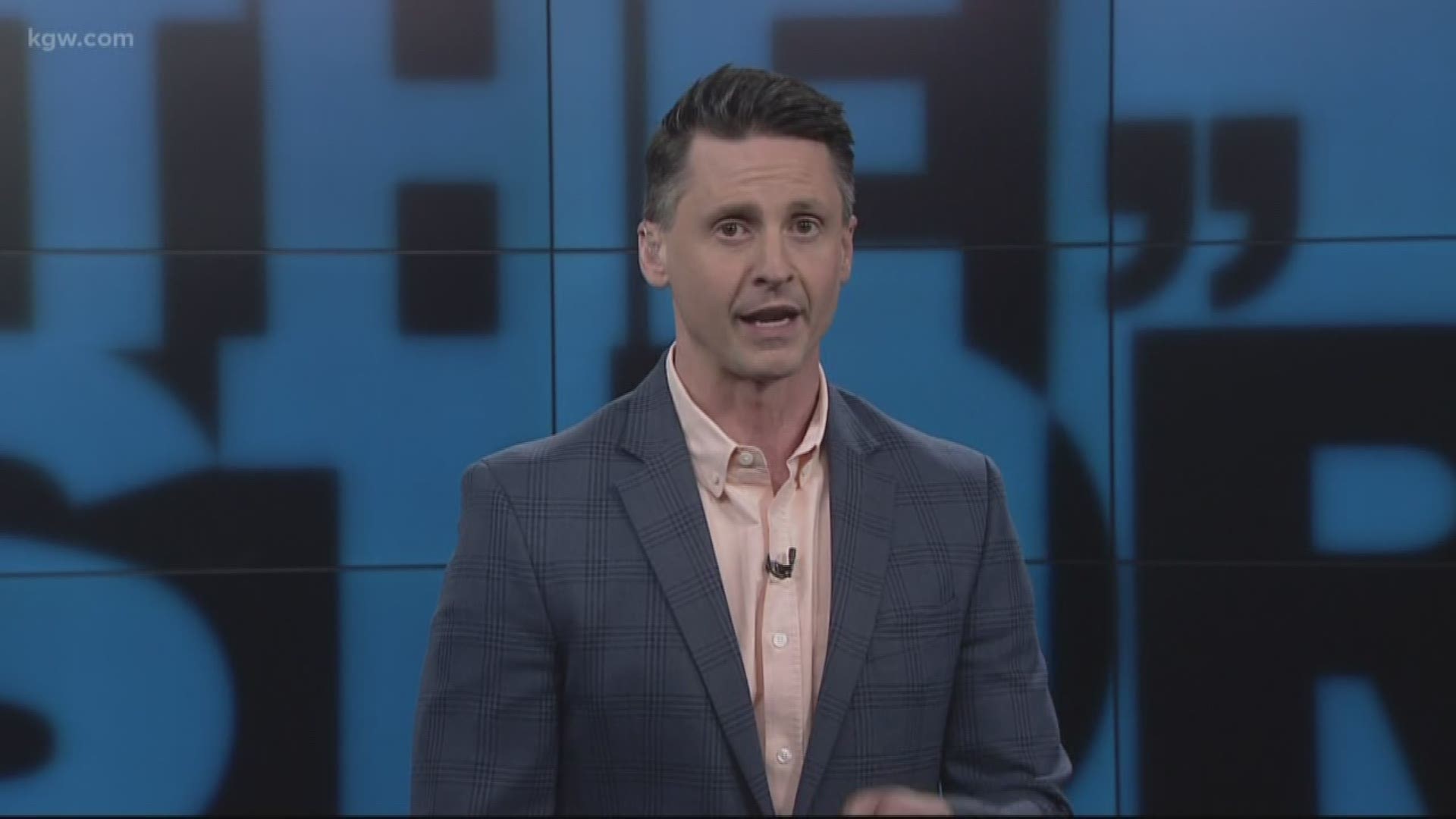 PORTLAND, Ore. — Mail-in voting is in the nationwide spotlight for this year's election, as COVID-19 is keeping many people from voting in person. Here in Oregon we're accustomed to mailing our ballots, but that doesn't mean we have all the answers.

So we've taken some of the questions you've asked us and reached out to experts and voting officials for answers.

We've also put together several voter guides that will help you through the process, whether you're new to Oregon, new to voting or just want to know more about the process, the measures, or the candidates on your ballot.

Remember: The 2020 general election is underway already; Nov. 3 is just when the voting process ends.

What questions do you have?

When do we get our ballots and voter guides?

In Oregon, military and overseas ballots have already been sent out. And the state's military/overseas voting guide is live right here. Out-of-state ballots will start going out on Oct. 5. The rest of the ballots, and the voters pamphlets, will be sent starting on Oct. 14.

You must register to vote by Oct. 13.

In Washington, the voters pamphlets have already been sent out, as have the military and overseas ballots. The rest of the ballots will go out starting on Oct. 16.

You must register to vote by Oct. 26 online or by mail, or you can register in person all the way up through Election Day, Nov. 3.

What percentage of Oregon voters mailed their ballots in the May primary?

That's a good reminder: You don't have to mail in your ballot. You can take it to any Oregon drop box location as soon as you've filled it out and signed it.

During the May primary, about half (50.47%) of voters returned their ballot through the mail. That’s a significant jump compared to past elections; the statewide average before that was about 35% of ballots returned by mail and the rest dropped off.

What happens to someone's ballot after they die?

Within five days of someone's death, the county registrar has to notify the county clerk who's in charge of the local election. The clerk then cancels the voter's registration and sends that information to the secretary of state.

At the end of every month, the Oregon Health Authority also sends a list of everyone who died in the state that month to the secretary of state's office, where they double-check that the voters' registrations have been canceled.

There have been very few cases in which a dead person's ballot was forged and submitted (which is a felony). In the 2016 general election, for example, six people were accused of doing so. Out of 2 million voters, that amounts to .0003% of the votes cast.

What happens if my ballot envelope signature doesn't match the one on file?

Here in Oregon, every ballot envelope needs to be signed before its mailed or dropped off, and that signature needs to match the signature you created on your voters' registration card.

Every ballot signature is carefully inspected and compared with the signature on file by a person - not a machine. If it matches, it's put into a pile to later be opened and counted.

If the signatures don't match, the person doing the initial inspection flags a supervisor. Election officials are even trained by forensic handwriting experts.

"We have fail-safes here in Oregon. If your signature doesn’t match, you’re gonna be contacted by your county election official and you’ll have at least 14 days to come in and correct that," Elections Director Steve Trout said.

When are Oregon votes counted?

Short answer: Ballots can be scanned and votes can be tallied starting seven days before the election (Oct. 27 this year), but none of the results can be released publicly until 8 p.m. on Election Day.

Long answer: Each vote-by-mail packet contains a secrecy envelope, a ballot return envelope and a ballot. Each ballot is checked immediately upon return to its respective county election office.

Ballots are held for counting until seven days prior to the election, per ORS 254.478, at which point the county clerk can:

But per ORS 260.705, a person may not make public the results of the tally of votes from any precinct until after 8 p.m. on the date of the election.

Can I vote if I don't have an Oregon driver's license?

You still can register to vote in Oregon without an Oregon driver's license, according to the secretary of state's office:

If you do not have an Oregon driver's license, permit or ID card, you can still use the online voter registration application. The information you enter will display on a voter registration card (PDF document) that you will need to print, sign and deliver to your county elections office to complete your registration.

Here's a list of all Oregon county elections offices

Can I take a selfie with my ballot?

In Oregon and a handful of other states, it's perfectly legal to take a selfie with your ballot. In Washington, it's allowed but there's no written law about it, so you should still tread carefully.

What do the different colored return envelopes mean?

Counties across Oregon and Washington use different color-coded systems to organize returned ballots. Most use colored envelopes to distinguish between counties, but Multnomah County works a little differently, according to Elections Director Tim Scott.

"We use a different color for each election because sometimes folks use envelopes from old elections and it helps us quickly differentiate," Scott explained.

How do I vote if I've been displaced by a wildfire?

Hundreds of Oregonians have lost their homes in wildfires so far, and many more have been evacuated from their homes because of the threat of wildfires.

Mail-in ballots will be sent out in less than two weeks in many Oregonians are rightfully asking how displaced individuals will be able to vote.

“The families and communities affected by the devastating wildfires across Oregon are in my thoughts and prayers," Oregon Secretary of State Bev Clarno said in a statement. "For any Oregonians displaced from their home and concerned about voting in the general election this November, rest assured we have a plan and are working closely with local election officials to ensure you can receive your ballot, vote, and make your voices heard.”

People who don't have permanent housing - or no housing at all - can still vote. The same goes if you've lost your home in the fires. You need to provide a residential address and a mailing address for your voter registration. 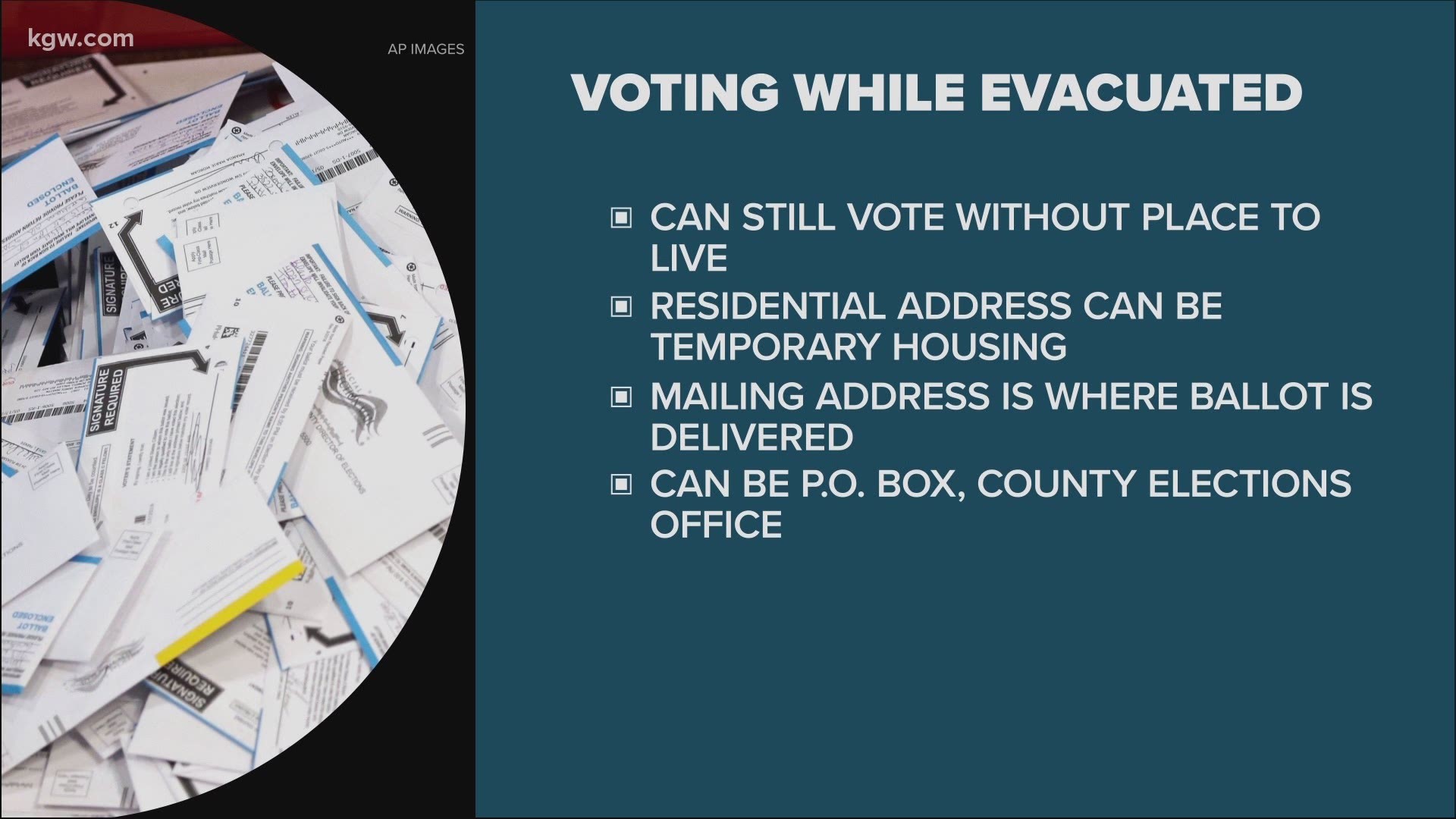 The residential address can be the address of a shelter or somewhere else you're staying.

Instead, you can put down the address of where you're staying, a PO box, or even the county elections office. If you do that, you can pick up your ballot at the elections office and return it there, to any mailbox or use a ballot drop box.

If you need to update your voter registration because of the fires, you need to do it by Oct. 13 here - that's the deadline to vote in the November election.

The Secretary of State's office sent out the frequently asked questions below and provided this link for more resources.