A pair of powerhouse Republicans in Ohio is moving from rivalry to cooperation in the 2018 race for Ohio governor. 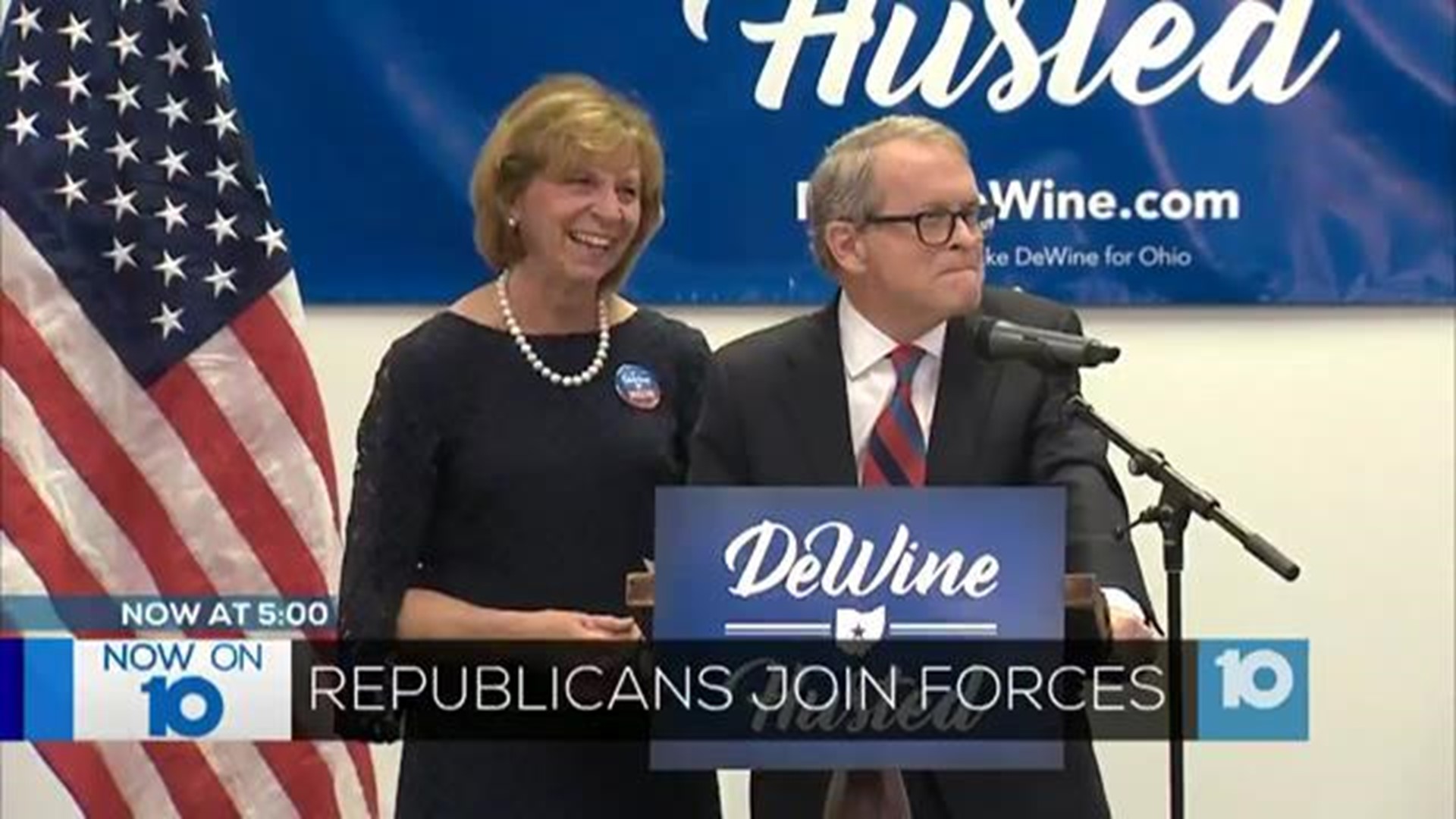 COLUMBUS, Ohio — Ohio's race for governor kicked into high gear Thursday as a major Republican merger and a big Democrat's expected entry saw the 2018 field begin to sort itself out.

Attorney General Mike DeWine and Jon Husted, the secretary of state, announced on Thursday that Husted would end his campaign for governor and become DeWine's running mate. The 70-year-old DeWine said Husted is "the one person" he wants at his side to confer with on big policy decisions.

"Jon brings experience, he brings leadership, he brings ideas, values, passion and a lot of compassion," DeWine said at a Columbus announcement.

Husted, 50, said he and DeWine will do best working together. "We can do more as a team than as individuals," he said at a Dayton announcement.

Both said there was no political deal discussed, such as that DeWine would serve just one term and position the younger Husted to run in four years. They said the proposal came about a week ago and a final decision was reached at breakfast Wednesday.

"Ohio wants a governor who will challenge the status quo, not accede to it," she said, characterizing DeWine as "the past" and herself, at 51, as the future. She is the only woman running for a statewide non-judicial office on the Republican side.

Also still in the GOP primary for now is U.S. Rep. Jim Renacci, of Wadsworth, whose campaign is largely self-funded.

Renacci's campaign reported raising about $575,000 as of July, which included $13,000 from his congressional committee, and accepting a $4 million personal loan from the candidate.

Husted's campaign reported $4.2 million on hand in July, and DeWine's had nearly $4.7 million in the bank.

Meanwhile, on the Democratic side, Jerry Springer announced he wouldn't run for governor. Some in the party — including former Ohio Gov. Ted Strickland — had viewed the tabloid talk show host as a potentially powerful candidate in the age of President Donald Trump to win back the state from Republicans.

GOP Gov. John Kasich, a 2016 presidential contender, is unable to run again due to term limits.

Springer's announcement on a weekly podcast came days after Democrat Richard Cordray left his job as federal consumer watchdog, a move viewed as positioning him for the launch of a gubernatorial bid.

The former state attorney general and treasurer was one of the last Obama-era holdouts in the Trump administration, where he had led the Consumer Financial Protection Bureau.

Sutton painted DeWine and Husted on Thursday as political insiders.

"The Republican ticket for governor of stale and staler means that Ohio government would remain on the side of big corporations and not people," the candidate said in a statement. "Theirs is a ticket of the past, not the future, of Ohio."

Whaley said Ohioans don't need "another decade of bad ideas from two rusted Republican politicians who, together, have been running for office for nearly 60 years."