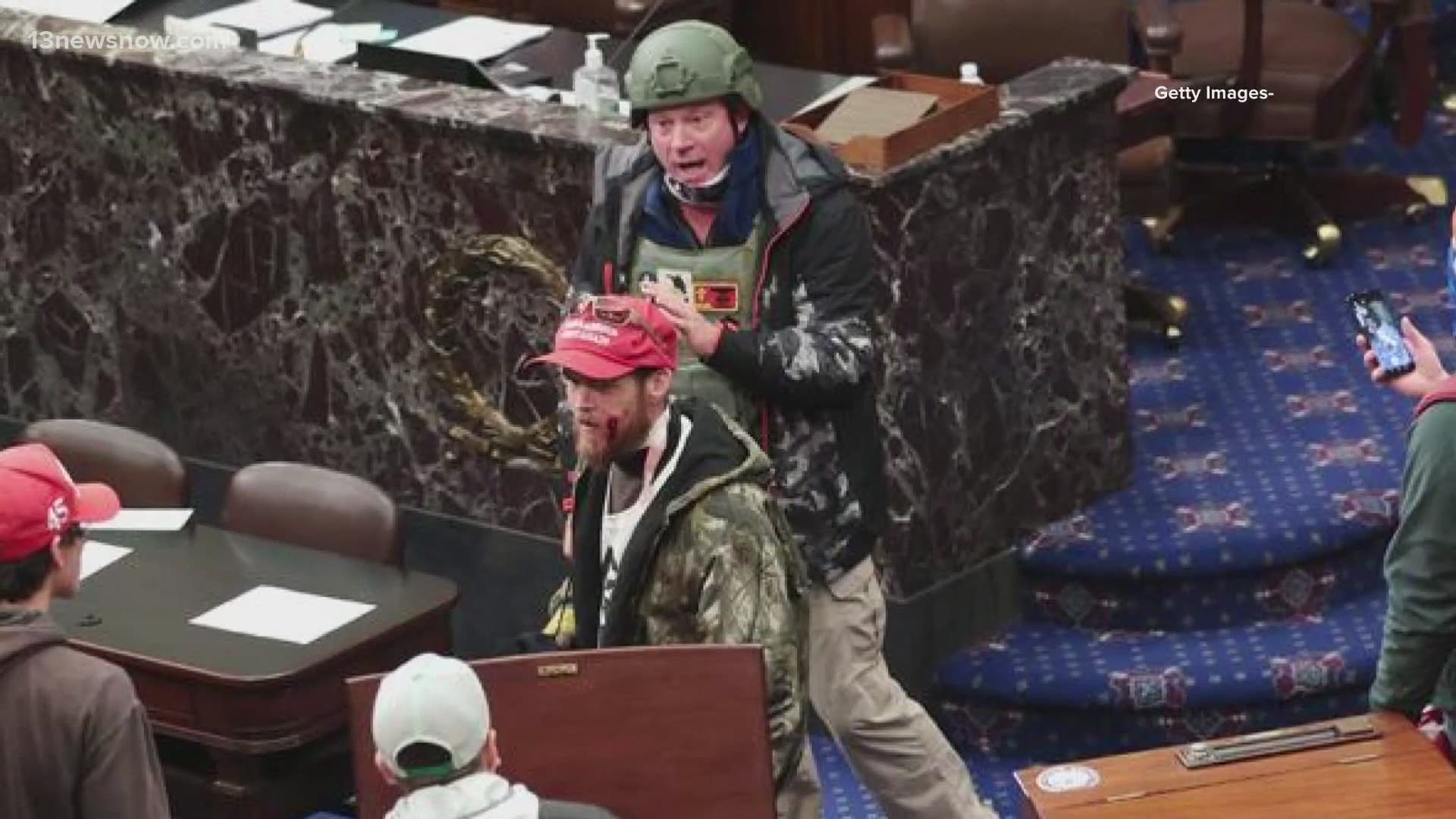 WASHINGTON — The Pentagon is confronting a resurgence of extremism, white supremacy, and other right-wing ideologies in the ranks.

The Joint Chiefs of Staff sent out a blistering memo to the troops this week, warning against extremist activity in the U.S. armed forces.

The move followed the arrests of several military veterans involved in last week's mob insurrection at the U.S. Capitol.

They include retired Air Force Lieutenant Colonel Larry Rendell Brock, Jr. He was photographed on the floor of the Senate, wearing a Kevlar helmet and carrying zip-tie plastic handcuffs.

The Air Force Academy graduate was arrested Sunday in Texas and charged by the Justice Department with knowingly entering a restricted building without lawful authority, violent entry, and disorderly conduct.

Credit: GrapevineTexas Police Department via AP
This undated photo provided by the Grapevine Texas Police Department shows Larry Rendall Brock Jr. During the deadly riot at the U.S. Capitol on Wednesday, Jan. 6, 2021, Brock was photographed on the Senate floor wearing a helmet and heavy vest and carrying zip-tie handcuffs. The retired Air Force officer was arrested in Texas and charged Sunday, Jan. 10 in federal court in the District of Columbia.

Also in the Capitol crowd that day: retired Navy Seal Senior Chief Adam Newbold of Ohio, who confirmed he's now being questioned by the FBI.

RELATED: Here's who has been federally charged in the US Capitol riots

Since then, all eight members of the Joint Chiefs issued their memo, emphasizing to the nation's 2.1 million troops: "The rights of freedom of speech and assembly do not give anyone the right to resort to violence, sedition, and insurrection."

"The problem of white supremacists in the ranks is a serious and growing one," said Heidi Beirich of the Global Project Against Hate and Extremism. "Many of us know former soldiers who have gone on to commit serious acts of terrorism."

Mark Pitcavage of the Anti-Defamation League also weighed in. He said: "The presence of extremists in the armed forces is dangerous to service members, their families and others, and hurtful to the good order, discipline and morale and effectiveness of the troops. It is a problem that our military cannot afford to ignore."

A 2020 Military Times poll showed that 36 percent of troops who responded have seen evidence of white supremacist and racist ideologies in the military.