The House Appropriations Committee is now calling for an investigation into the law enforcement response to a pro-Trump mob that stormed the Capitol on Wednesday. 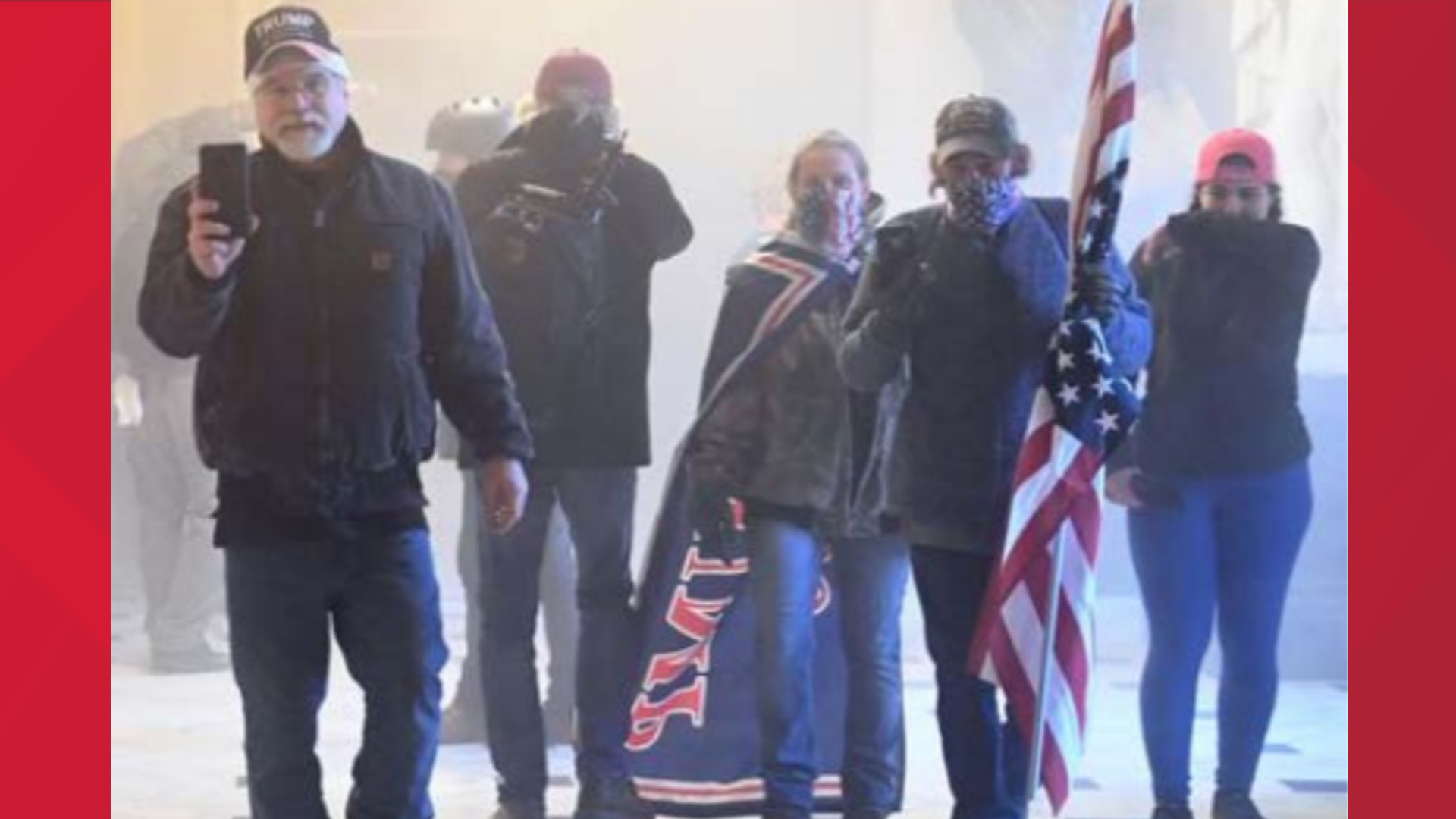 WASHINGTON — Capitol Police Chief Steven A. Sund will resign his post next week over his department's failure to prevent pro-Trump insurrectionists from storming the U.S. Capitol Building on Wednesday.

The announcement of Sund's resignation came Thursday evening after U.S. House Speaker Nancy Pelosi (D-Calif.) and the president of the Capitol Police Officer's Union both called for him to step down.

Videos posted to social media saw badly outnumbered Capitol Police officers trying to hold the line Wednesday against a pro-Trump mob, some of whom were armed, intent on pushing its way into the Capitol. More than 50 Capitol and D.C. police officers were reportedly injured while responding Wednesday.

This video of the siege of the Capitol on TikTok is crazy and different than I had seen pic.twitter.com/JXwvKVLjxB

But other videos from the day also went viral, including one of a Capitol Police officer appearing to agree to a selfie during a live stream by a member of the group that had breached the building. At the point the video was taken, the mob had already violently pushed its way past the Capitol Police line and caused the evacuation of two Congressional office buildings, plus the lockdown and eventually evacuation of both chambers of Congress.

Within just a few hours, the video had been captured and re-uploaded by dozens of other accounts, some of which had drawn hundreds of thousands of reactions on Twitter alone.

It’s a dark day in America when a UNITED STATES Capitol police officer decides to take a selfie with a TERRORIST! And they wonder why WE don’t feel safe! pic.twitter.com/UZsLnS2s68

Another video, originally posted to Tik Tok but likewise re-uploaded to other sites, appears to show Capitol Police officers intentionally removing barriers to allow a pro-Trump group past them.

THEY LITERALLY JUST LET THEM THROUGH pic.twitter.com/tWMuchly8w

The officers’ actions in those videos seem to be at odds with the agency’s response as described by Sund in a statement Thursday. In that statement, he described the pro-Trump mob as engaging in “criminal riotous behavior” and said the individuals had “actively attacked United States Capitol Officers.”

Sund’s statement did not address either video. It also did not address questions posed by WUSA9 and other news organizations about the apparent disparity between law enforcement’s response to Wednesday’s assault on the Capitol and Black Lives Matters protest over the summer.

The response to those June protests was far more aggressive – involving not just the use of grenade-launched chemical irritants and stinger balls and military crowd control tactics, but also the mobilization of unmarked riot control officers from the Bureau of Prisons and the D.C. National Guard.

In contrast, when city and Congressional leaders requested National Guard assistance on Wednesday, that request was reportedly initially denied by the Department of Defense. Guardsmen from D.C., Maryland and Virginia, along with state troopers from Maryland and Virginia and Montgomery County and D.C. police, did eventually respond to the Capitol to help retake the building. Tear gas was eventually used in the Senate chamber as well after pro-Trump insurrectionists breached it.

The failure to stop the mob from breaching the Capitol Building has prompted calls from congressional leaders for an investigation and even the possible removal of top officials at the Capitol Police.

On Thursday afternoon, House Speaker Nancy Pelosi (D-CA) told reporters she had already received the resignation of House Sergeant at Arms Paul Irving and that she was calling for Sund's resignation as well.

The Speaker did make a point to laud the bravery of the Capitol Police officers who were on scene at the Capitol on Wednesday, however.

"Let me just say this: Many of our Capitol Police just acted so bravely and with such concern for the staff and the members, for the Capitol – for the Capitol of the United States – and they deserve our gratitude," Pelosi said. "But there was a failure at the top of the Capitol Police, and I think Mr. Sund… he hasn’t even called us since this happened!

Pelosi says @CapitolPolice Chief Sund still has not contacted her since the Capitol Building was stormed by a pro-Trump mob yesterday.

On Thursday evening, the Capitol Police Officers' Union went even further, calling for "leadership change at the highest level," including Sund and his senior command staff.

“We have several protesters dead, multiple officers injured and the symbol of our Democracy, the U.S. Capitol, desecrated. This never should have happened," union chairman Gus Papathanasiou wrote in a statement.

In a pretty incredible statement, the @CapitolPolice Officers' Union is calling for Chief Steven Sund to resign: "Without a change at the top, we may see more events unfold like those we saw on January 6th." Says there's a "vacuum of leadership." pic.twitter.com/73HU0bzuWR

Calling Wednesday's events the "greatest breach of the U.S. Capitol since the War of 1812," Papathanasiou said there should be an immediate plan drawn up to coordinate "round-the-clock" law enforcement presence at the Capitol.

“Without a change at the top, we may see more events unfold like those we saw on January 6th," he wrote. "We cannot leave our officers and the Capitol Hill community they protect, to the mercy of further attacks amid a vacuum of leadership.

Within an hour of the release of the union's statement, WUSA9 had confirmed that Sund would resign his post. Sund released a statement shortly thereafter, saying he would transfer to sick leave status on January 17. Sund will continue to be paid until he uses up 440 hours of banked sick leave.

And here is the official resignation letter from @CapitolPolice Chief Steven A. Sund. Sund will transition into sick leave status on January 17, and will be paid until he exhausts his 440(!) banked hours of sick leave. pic.twitter.com/gQ7AqqYwSb

Sund was appointed to lead the Capitol Police by President Donald Trump in June 2019. He joined the agency in 2017 after 25 years with the Metropolitan Police Department, where he retired as the commander of the Special Operations Division. While with MPD, Sund was the on-scene commander at multiple critical events in the District, including the 2009 shooting at the Naitonal Holocaust Museum and the 2013 active shooter incident at the Washington Navy Yard.

In Congress, Democrats on the House Appropriations Committee, including Rep. Rosa DeLauro (D-CT) and Rep. Tim Ryan (D-OH), have called for a review of “the law enforcement response to the coup attempt:”

“The coup attempt at the Capitol yesterday was instigated by President Trump and responsibility for the violence rests with him and his supporters who ransacked the People’s House. However, the breach of the Capitol raises serious questions about what law enforcement did and what they should have done differently.

“We recognize the bravery of the Capitol Police and law enforcement officers who protected Members and essential workers in the Capitol Complex yesterday. At the same time, it is obvious that there was a severe systemic failure in securing the building’s perimeter and in the response once the building was breached.

“To ensure the safety of those who work and visit here, we must get to the bottom of these breakdowns and prevent them from ever happening again. The Legislative Branch Appropriations Subcommittee, which funds the Capitol Police, is robustly investigating yesterday’s events, including with hearings to directly question key leaders about what went wrong.”

"Some people are worried today that some police were complicit with the protesters," Cooper said. "It's one thing to be friendly and to de-escalate the violence. But it's one thing to take selfies with them (rioters) and let them go through the lines."

Cooper said he did not see these actions by Capitol Police himself, but said he's "never seen a crowd less afraid of the police than this one."

"At best they were overwhelmed and did not anticipate what they had been warned of by (President) Trump, even as of this morning when he said he would join the protests at the Capitol. ... At worst, they let this protest proceed unlike any other," Cooper said when asked directly if he believes that US Capitol Police were complicit in what happened.

WUSA9 reached out to the Capitol Police for comment about the response to Wednesday’s events, but as of Thursday evening had received no reply. This story will be updated if and when a response is received.