A report from The Atlantic, which the White House and President Trump denied, said Trump referred to American war dead buried in France as 'losers' and 'suckers.' 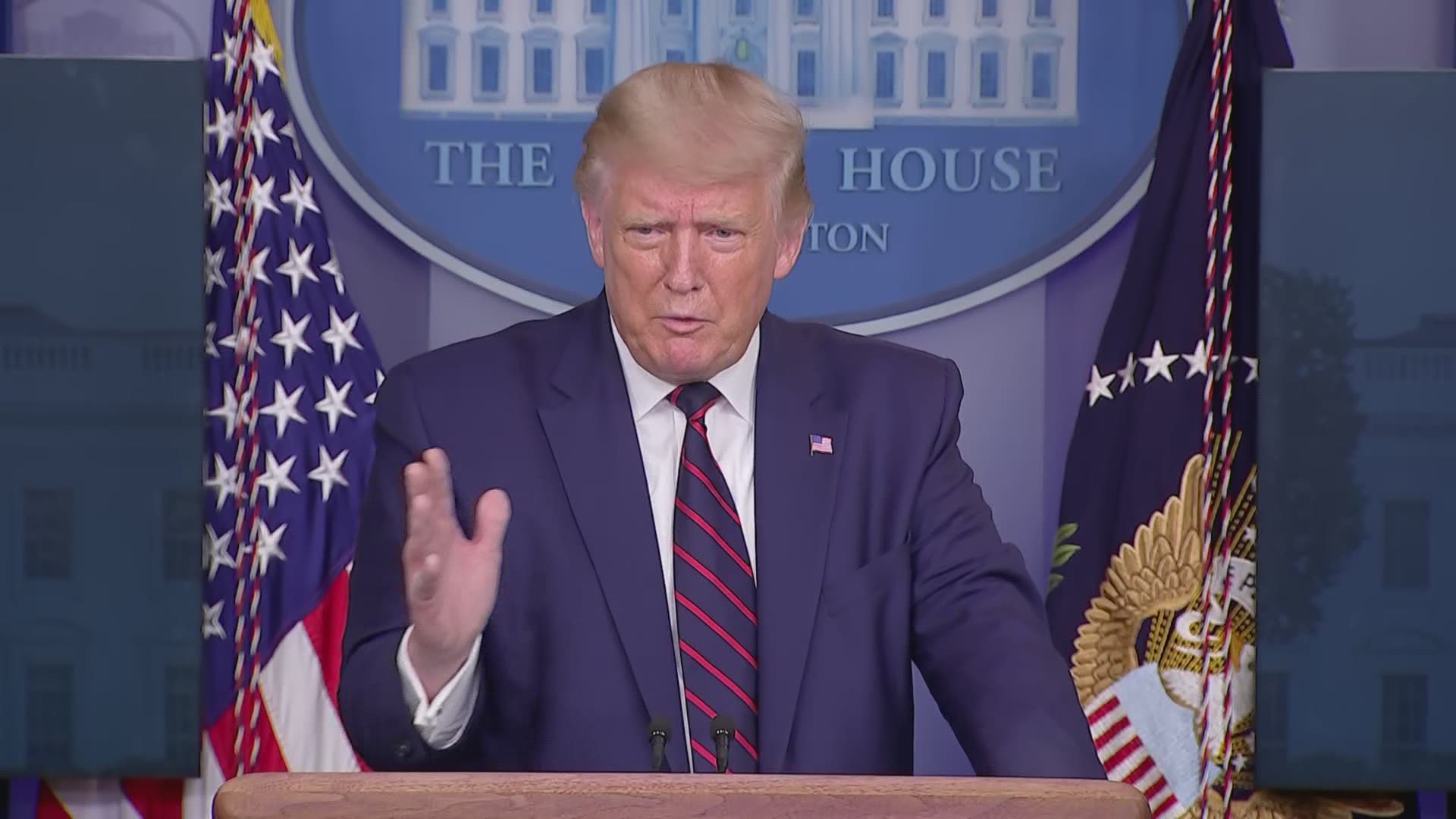 WASHINGTON — President Donald Trump defended himself Friday against accusations that he mocked American war dead as his Democratic rival, Joe Biden, intensified efforts to frame the election as a referendum on the president’s character.

The allegations, sourced anonymously in The Atlantic, describe multiple offensive comments by the president toward fallen and captured U.S. service-members, including calling World War I dead at an American military cemetery in France as “losers” and “suckers” in 2018. The reported comments, many of which were confirmed independently by the AP, are shining a fresh light on Trump’s previous public disparaging of American troops and military families and opening a new political vulnerability for the president less than two months from Election Day.

“This is more made up Fake News given by disgusting & jealous failures in a disgraceful attempt to influence the 2020 Election!” Trump tweeted late Thursday, as aides mounted a concerted defense of the president, with Trump’s campaign and allies taking to social media and broadcast interviews to denounce the report.

“I’ve done more for the military than almost anyone else," he added Friday in the Oval Office.

The president was alleged to have made the comments as he was set to visit the Aisne-Marne American Cemetery during a trip to France in Nov. 2018. The White House said the visit was scrubbed because foggy weather made the helicopter trip from Paris too risky and the 90-minute drive deemed infeasible.

Trump, who traveled to Pennsylvania on Thursday, told reporters after he returned to Washington that the Atlantic report was “a disgraceful situation” by a “terrible magazine.”

“I would be willing to swear on anything that I never said that about our fallen heroes,” Trump told the reporters, gathered on the tarmac in the dark. “There is nobody that respects them more. No animal — nobody — what animal would say such a thing?”

Fox News, citing sources, disputed the claim that Trump called off the visit over disdain of war dead. But the sources did confirm parts of The Atlantic's report. Fox cited a former senior administration official who alleged Trump was in a bad mood and, "He just didn't want to go."

The official also reportedly told Fox News that Trump said separately that the Vietnam War was "stupid" and that "Anyone who went was a sucker."

On a call with reporters hosted by the Biden campaign Friday, Illinois Sen. Tammy Duckworth lambasted Trump for “belittling the sacrifices of those who have shown more bravery than he’s capable of.”

“Of course he thinks about war selfishly,” Duckworth said of Trump. “He thinks of it as a transactional cost, instead of in human life and American blood spilled, because that’s how he’s viewed his whole life. He doesn’t understand other people’s bravery and courage because he’s never had any of his own.”

Duckworth, a retired Army National Guard lieutenant colonel who lost both of her legs in the Iraq War, has been a prominent critic of Trump’s handling of military issues. Knocking Trump for allegedly inventing an injury to avoid serving in the Vietnam War, Duckworth said that she’d “take my wheelchair and my titanium legs over Donald Trump’s supposed bone spurs any day.”

Khizr Khan, the Gold Star father who drew national attention after criticizing Trump during the 2016 Democratic National Convention, joined Duckworth on the call and said that Trump’s “life is a testament to selfishness.”

“Words we say are windows into our souls. So when Donald Trump calls anyone who places their lives in service of others a loser, we understand Trump’s soul,” he said. Khan's son, Humayun, was killed in action in Iraq in 2004.

In 2016, Trump responded to the criticism from Khan by claiming he'd made sacrifices of his own and making an Islamophobic attack on Khan's wife, Ghazala Khan, who was wearing a headscarf at the Democratic convention, saying, “She had nothing to say. She probably — maybe she wasn’t allowed to have anything to say. You tell me.”

Trump's niece Mary Trump, who recently published a tell-all about her uncle, reacted on social media with a picture of her father who served in the National Guard.

"His brother Donald and his father Fred thought he was a loser and a sucker," Mary Trump wrote. "To those of you who have loved, served, and sacrificed for our country—you are in very good company."

In addition to serving in the Nat’l Guard my dad was a professional pilot at the dawn of the jet age. His brother Donald and his father Fred thought he was a loser and a sucker. To those of you who have loved, served, and sacrificed for our country—you are in very good company. pic.twitter.com/zMgtDXgf6y

Chesley "Sully" Sullenberger, the airline pilot who became a national hero after safely landing his plane full of passengers in New York's Hudson River in 2009, also reacted. The military veteran posted a photo of his father, also a veteran, and launched into a criticism of Trump on Twitter.

"While I am not surprised, I am disgusted by the current occupant of the Oval Office. He has repeatedly and consistently shown himself to be completely unfit for and to have no respect for the office he holds," Sullenberger wrote in a long tweet thread.

1/9 I am a veteran. I volunteered for military service during wartime. So did my father. His generation saved the world from fascism. pic.twitter.com/0tWKdMYDKs

Biden said that “if the revelations in today’s Atlantic article are true, then they are yet another marker of how deeply President Trump and I disagree about the role of the President of the United States.”

“Duty, honor, country — those are the values that drive our service members,” Biden said in a statement Thursday night, adding that if he is elected president, “I will ensure that our American heroes know that I will have their back and honor their sacrifice — always.” Biden’s son Beau served in Iraq in 2008-09. 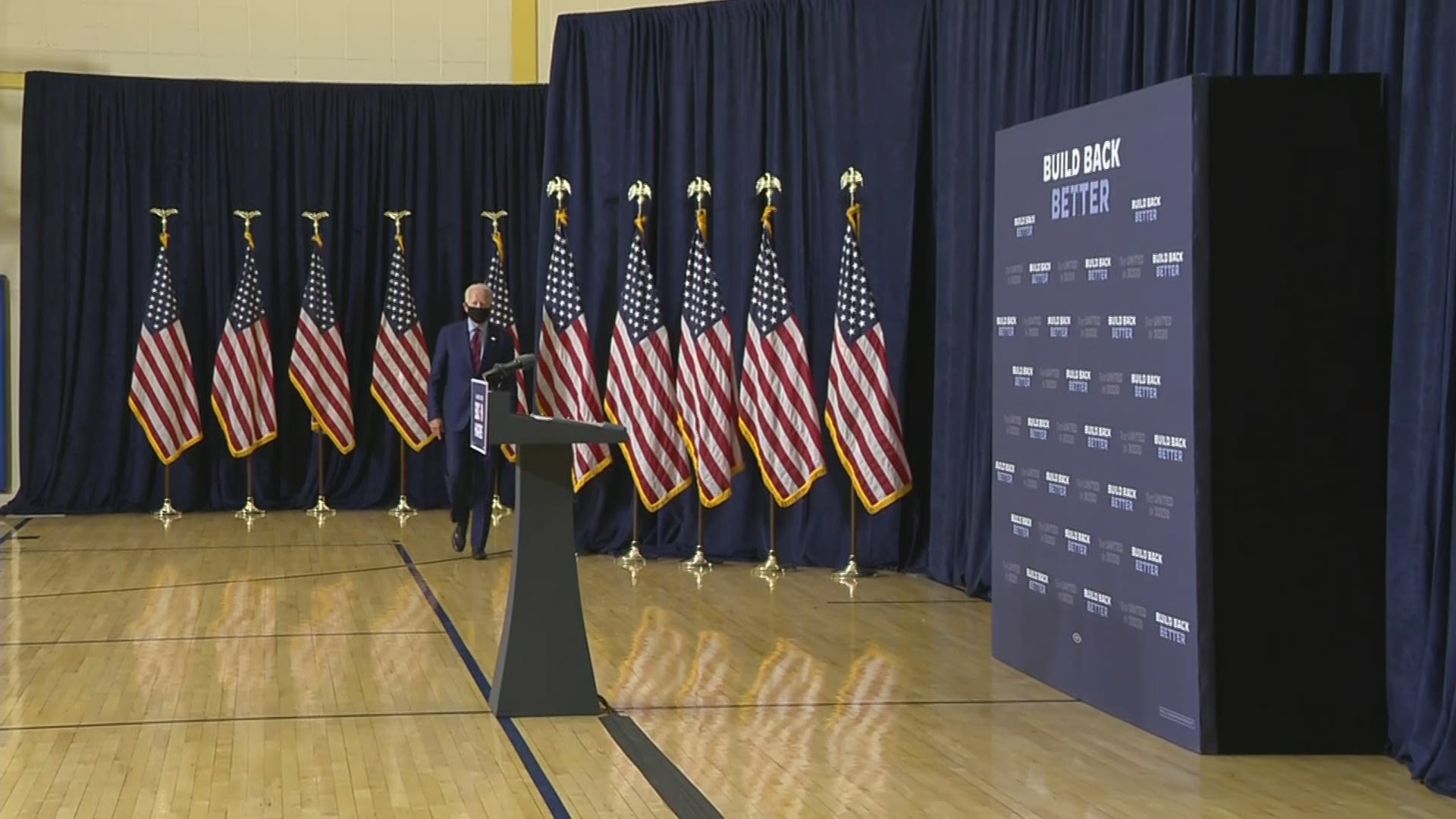 Trump also denied calling the late Arizona Sen. John McCain, a decorated Navy officer who was a prisoner of war in Vietnam, a “loser" after his Aug. 2018 death.

Trump acknowledged Thursday he was “never a fan” of McCain and disagreed with him, but said he still respected him and approved everything to do with his “first-class triple-A funeral” without hesitation because “I felt he deserved it.”

In 2015, shortly after launching his presidential candidacy, Trump publicly blasted McCain, saying “He’s not a war hero.” He added, “I like people who weren’t captured.” At the time, Trump also shared a news article on Twitter calling McCain a “loser.”

Trump only amplified his criticism of McCain as the Arizona lawmaker grew critical of his acerbic style of politics, culminating in a late-night “no” vote scuttling Trump’s plans to repeal the Affordable Care Act. That vote shattered what few partisan loyalties bound the two men, and Trump has continued to attack McCain for that vote, even posthumously.

I was never a big fan of John McCain, disagreed with him on many things including ridiculous endless wars and the lack of success he had in dealing with the VA and our great Vets, but the lowering of our Nations American Flags, and the first class funeral he was given by our....

“It’s sad the depths that people will go to during a lead-up to a presidential campaign to try to smear somebody,” said White House Chief of Staff Mark Meadows Thursday.

Secretary of State Mike Pompeo told “Fox & Friends” on Friday that he was with the president for a good part of the trip to France. “I never heard him use the words that are described in that article,” Pompeo said.

....John a loser and swear on whatever, or whoever, I was asked to swear on, that I never called our great fallen soldiers anything other than HEROES. This is more made up Fake News given by disgusting & jealous failures in a disgraceful attempt to influence the 2020 Election!

Former White House press secretary Sarah Sanders tweeted that she was part of the discussion about visiting the cemetery. “This never happened. I have sat in the room when our President called family members after their sons were killed in action and it was heart-wrenching. ... I am disgusted by this false attack."

In the article, defense officials said Trump made the comments as he begged off visiting the cemetery outside Paris during a meeting following his presidential daily briefing on the morning of Nov. 10, 2018.

Staffers from the National Security Council and the Secret Service told Trump that rainy weather made helicopter travel to the cemetery risky, but they could drive there. Trump responded by saying he didn’t want to visit the cemetery because it was “filled with losers,” the official said, speaking on condition of anonymity because the official was not authorized to discuss it publicly.

The White House blamed the canceled visit on poor weather at the time. An excerpt from former national security adviser John Bolton's book, "The Room Where It Happened," also backs the claim that the weather was bad, according to Fox News.

During a signing at the White House on Friday, Trump also pointed out Bolton's book confirming his account.

TEGNA Staff contributed to this report.