Catrina Cooper’s third and fourth grade students say watching her fight cancer has taught them to never give up. 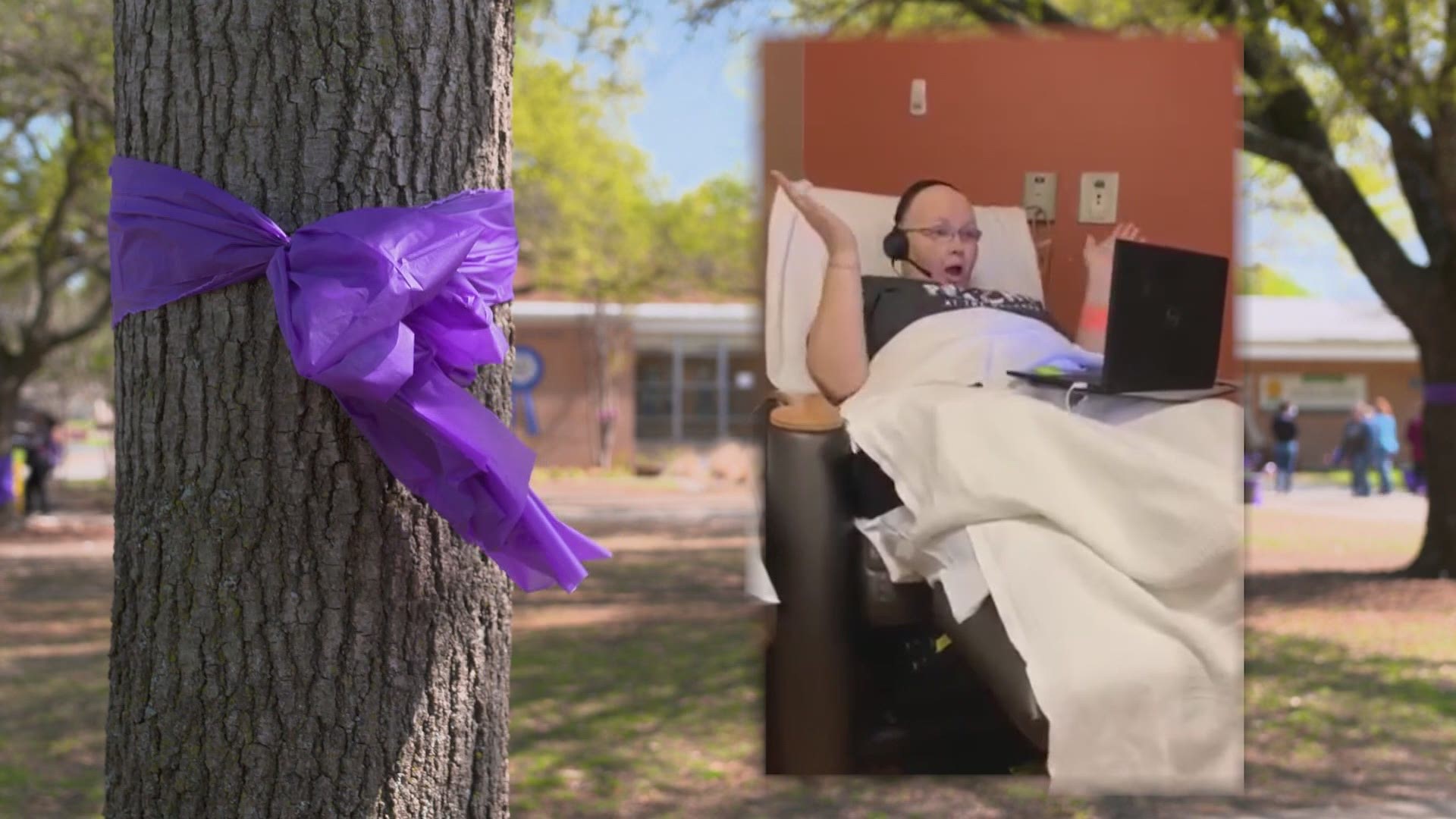 DALLAS — Since its founding in the 1950’s, Victor H. Hexter Elementary’s colors have been blue and gold, and the mascot has been the hawk.

“Everyone knows her favorite color is purple,” said Lauren Shaw, the school’s principal.

“Specifically, a student said they wanted to warm her heart with purple,” said Erika Guerra, who co-teaches with Cooper.

In April 2020, Cooper was diagnosed with cervical cancer and given six months to live.

She beat that prognosis by enduring 140 hours of chemotherapy and more than 25 rounds of radiation, and she through it all she continued teaching as much as she could.

Credit: Cooper Family
An image from a video of Catrina Cooper teaching her DISD students while receiving chemotherapy to treat cancer.

Family members posted to Facebook a video of Cooper undergoing chemotherapy while virtually dancing with her students on Zoom.

“It’s good to be in her classroom because she’s always there for us,” said Kennedy Strange, one of Cooper’s students.

“And when we make mistakes, she gets us in the mood to try to do our best again.”

“It has been hard,” she admitted. “But, deep down we know she’s a strong and fierce woman.”

Students and fellow teachers watched in awe as Cooper bravely battled and navigated difficult conversations with her kids.

Credit: Cooper Family
Hexter Elementary teacher Catrina Cooper is in the middle of a group of students celebrating Valentine's Day before she was diagnosed with cancer.

“She even went as far as telling them she felt like she was Wonder Woman with superpowers. Upon hearing her say that, the girls were like, ‘Mrs. Cooper has this!’” said Lauren and Kennedy’s mother, Kim.

In the last few weeks, the cancer has gotten worse and partial paralysis from so much intense treatment has set in.

Cooper is now hospitalized, but her spirits remain high – in large part from the support her school has shown.

“It’s more than a job to me,” she said from her hospital room at Baylor School and White Medical Center in Plano.

“It’s my passion and I didn’t want to let my kids down.”

With Cooper’s biological family surrounding her in the hospital, her school family has leaped into action.

They also had students write cards and letters which now line the wall of her hospital room.

“Clearly, we all stick together - more than I ever could have imagined,” Cooper said.

“I just absolutely love her,” colleague Amanda Rodriguez said. “She’s the kindest most thoughtful person that I’ve ever met.”

Cooper’s husband, Cory, has left his job to focus on caring for his wife -- the kind of teacher children dream of having.

“I can’t say how many times she bought things for children who need it out of her own pocket,” Cory said.

His wife explained, “I have students that are in tough situations and I just want them to know that I’m there for them. And that I love them. And I miss them deeply.”

“There was this one kid who didn’t get a lot of food at home and she’d buy food for him and just tell him that she likes to keep a lot of snacks in her room,” said Cooper’s daughter, Faith, who is now studying to be an elementary teacher, too.

Their hero just got the difficult news from doctors that hospice might be her best choice.

Cooper refuses to even consider that a choice.

“I’m going to fight until the very end,” she said.

“And that is a message for my students - to keep fighting no matter what your circumstances are.”

Lawren Strange said she had one message for her former teacher: “Never give up.”