President-elect Biden laid out three COVID-19 priorities for his first 100 days in office that includes distributing a vaccine to 100 million people in that time. 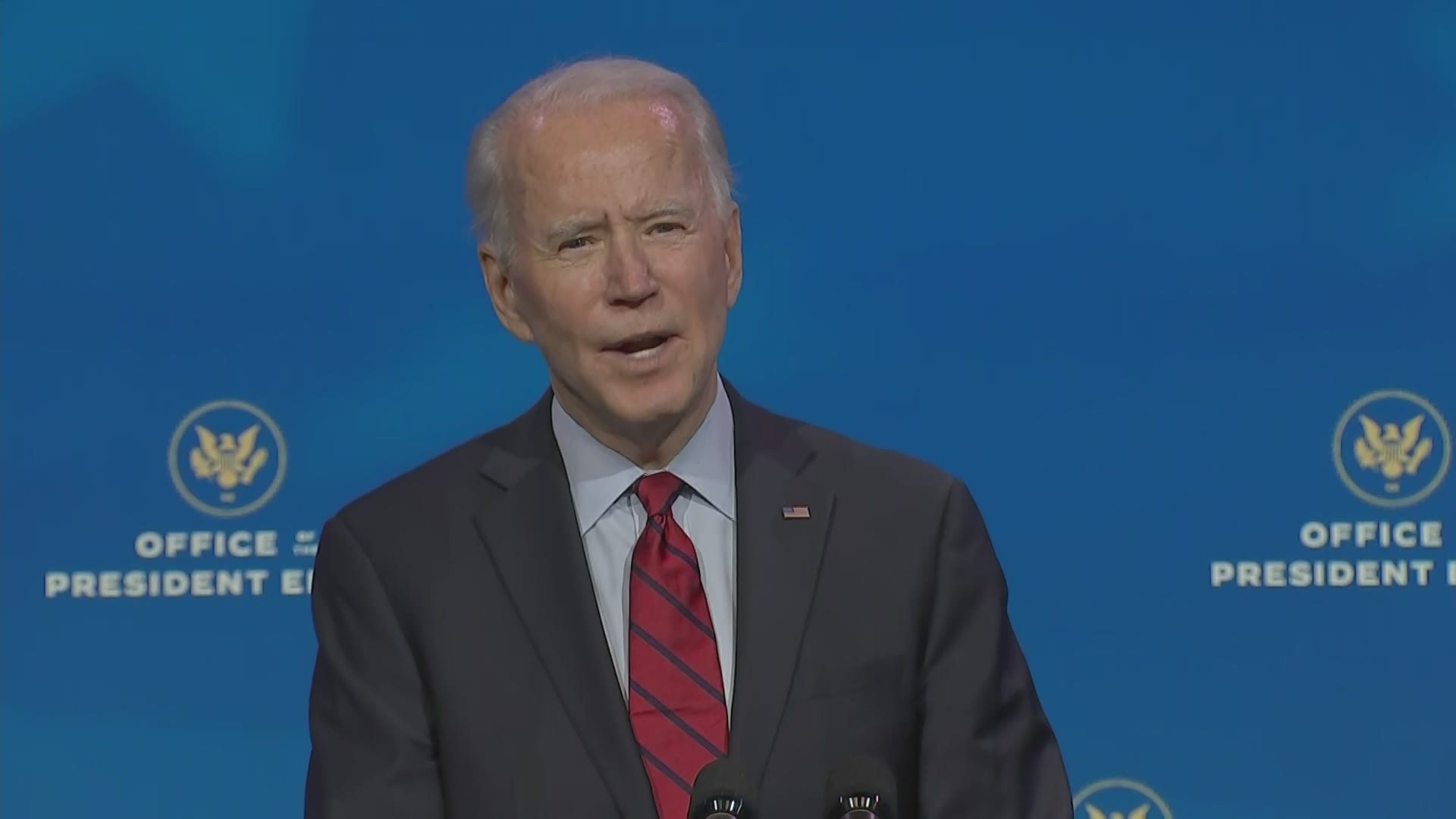 WASHINGTON — President-elect Joe Biden on Tuesday called for urgent action on the coronavirus pandemic as he introduced a health care team that will be tested at every turn while striving to restore a sense of normalcy to the daily lives of Americans.

Biden laid out three COVID-19 priorities for his first 100 days in office: a call for all Americans to mask up where he can "under the law," a commitment to administer 100 million vaccines and a pledge to try to reopen a majority of the nation's schools.

“Out of our collective pain, we are going to find a collective purpose,” Biden said. “To control the pandemic, to save lives and to heal as a nation.”

Topping the roster of Biden picks was health secretary nominee Xavier Becerra, a Latino politician who rose from humble beginnings to serve in Congress and as California's attorney general. Others include a businessman renowned for his crisis management skills and a quartet of medical doctors, among them Anthony Fauci, the government's top infectious-disease specialist.

But the usual feel-good affirmations that accompany such unveilings were overshadowed by the urgency of the moment, with new cases of COVID-19 averaging more than 200,000 a day and deaths averaging above 2,200 daily as the nation struggles with uncontrolled spread.

Vaccines are expected soon. Scientific advisers to the government meet Thursday to make a recommendation on the first one, a Pfizer shot already being administered in the United Kingdom.

But having an approved vaccine is one thing, and getting it into the arms of 330 million Americans something else altogether. Biden will be judged on how well his administration carries out the gargantuan task.

On Tuesday, he warned that his team's preliminary review of Trump administration plans for vaccinations has found shortcomings. And he called on Congress to pass legislation to finance administration of vaccines as they become more widely available next year.

The rest of Biden's extensive health care agenda, from expanding insurance coverage to negotiating prices for prescription drugs, will likely hinge on how his administration performs in this first test of competence and credibility.

Becerra, Biden's pick to head the Department of Health and Human Services, will be backed in the White House by businessman Jeff Zients, who will assume the role of coronavirus response coordinator. Running complex, high-risk operations is his specialty.

Alongside Fauci, the other medical doctors selected include infectious-disease specialist Rochelle Walensky to run the Centers for Disease Control and Prevention, Vivek Murthy as surgeon general and Yale epidemiologist Marcella Nunez-Smith to head a working group to ensure fair and equitable distribution of vaccines and treatments.

Credit: AP
Dr. Anthony Fauci, Director of the National Institute of Allergy and Infectious Diseases at the National Institutes of Health, listens during a Senate Senate Health, Education, Labor, and Pensions Committee Hearing on the federal government response to COVID-19 Capitol Hill on Wednesday, Sept. 23, 2020, in Washington. (Graeme Jennings/Pool via AP)

HHS is a $1 trillion-plus agency with 80,000 employees and a portfolio that includes drugs and vaccines, leading-edge medical research and health insurance programs covering more than 130 million Americans.

In choosing Becerra to be his health secretary, Biden tapped a prominent defender of the Affordable Care Act. But Becerra, 62, will face questions in his Senate confirmation about whether he possesses sufficient health care and management experience. The California attorney general's office is the largest of any state, but it doesn't come close to HHS.

Becerra as a congressman played an insider role helping steer “Obamacare” to passage, and as California attorney general he leads a coalition of Democratic states trying to block the Trump administration's latest attempt to overturn it. But he has been less involved in the day-to-day work of combating the coronavirus.

Becerra would be the first Latino to serve as U.S. health secretary. Biden, in announcing his pick Tuesday, initially stumbled on the Spanish pronunciation of Becerra's name.

But Biden was drawn to Becerra’s working-class roots, his longtime effort to increase access to health care and his willingness to work with Republicans to solve problems like getting patients access to COVID-19 treatments.

The president-elect is under pressure from fellow Democrats to ensure that his Cabinet is diverse. Black and Asian American groups are pressing for more representation.

Biden’s choice of Becerra smooths, but does not end, the concerns of the Congressional Hispanic Caucus about Latino representation. Becerra's mother emigrated from Mexico, and his U.S.-born father spent his formative years in that country.

As HHS secretary, Becerra would be responsible for overseeing the Office of Refugee Resettlement, which cares for unaccompanied minors who enter the U.S. illegally. As attorney general, Becerra helped lead a coalition of fellow state attorneys general who sued over the Trump administration’s child separation policies.

Republicans immediately made clear their attack lines on the pick. Sen. John Cornyn of Texas argued that Becerra was unqualified because he lacked ties to the health care or pharmaceutical industries. Sen. Mike Braun of Indiana blasted his support for “Medicare for All," which is not Biden's policy. Anti-abortion groups have called Becerra “unacceptable."

In a break with some of his previous picks, which emphasized familiarity, Biden does not know Becerra well. Nor does Becerra have deep ties to Harris; while Becerra took over her old job, he had spent most of his career in Washington while Harris was coming up through politics at home in California.

Typically, the HHS secretary’s job requires political connections, communications skills, managerial savvy, a willingness to learn about complex medical issues and a creative legal mind to use vast regulatory powers without winding up on the losing end of lawsuits.

As a former 12-term congressman, Becerra will enter the job knowing Capitol Hill but will need to establish ties with governors who will play outsize roles in distributing the coronavirus vaccine.

Credit: AP
FILE - In this Nov. 10, 2020, file photo President-elect Joe Biden smiles as he speaks at The Queen theater in Wilmington, Del.