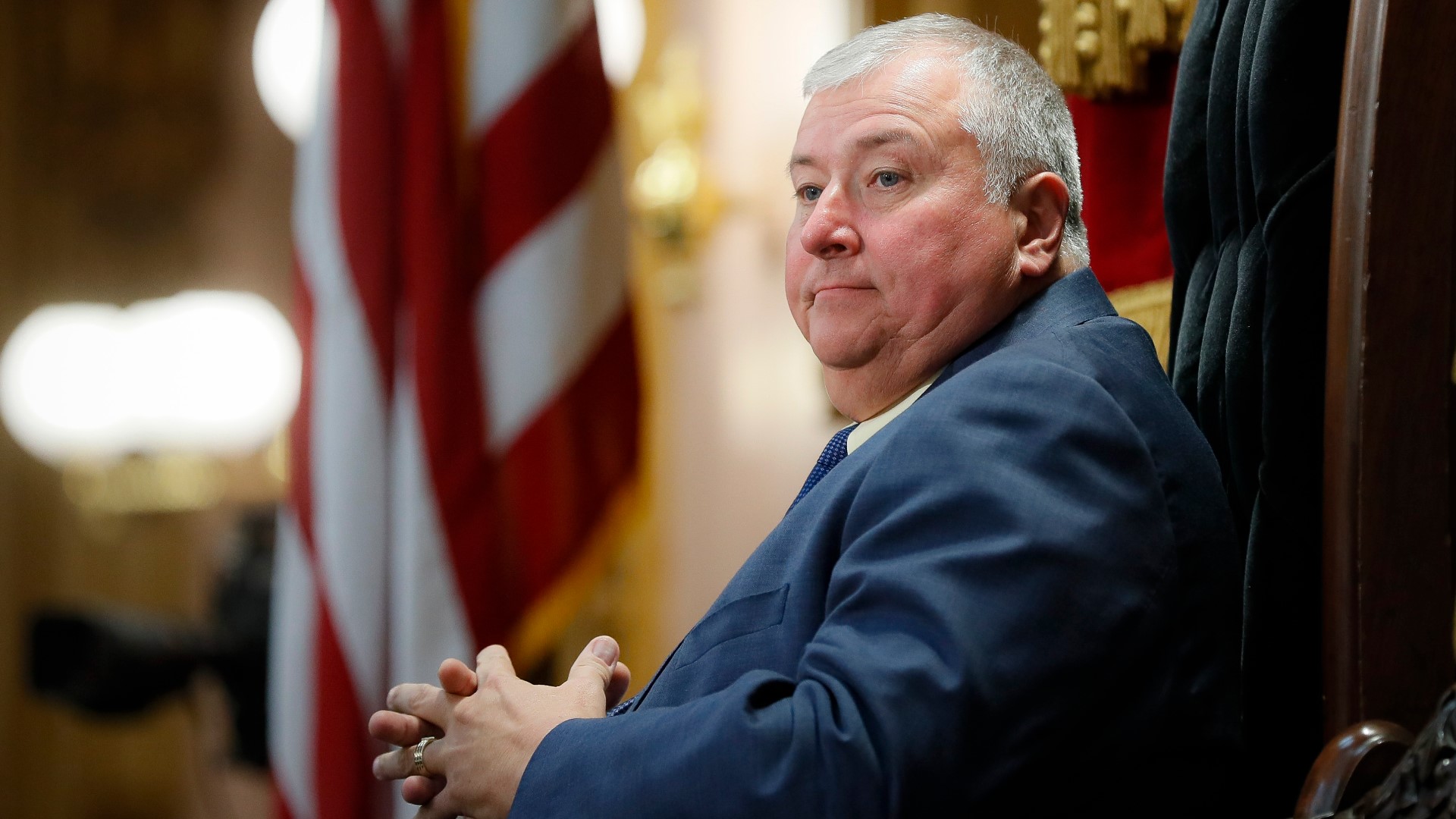 COLUMBUS, Ohio — Nearly a year after federal agents raided the farm of the former Ohio House speaker, his colleagues made their first formal move Thursday toward expelling him from the chamber.

Rare bipartisan efforts to remove Republican state Rep. Larry Householder had their initial hearing at the Ohio Statehouse, as fellow representatives finally acted after a year-long war of words to address the disgraced lawmaker's continued presence in the House.

“It continues to be a sad fact that it is Representative Householder’s own conduct that makes this resolution a necessity,” GOP state Rep. Brian Stewart said in his sponsor testimony for one of the resolutions. “We feel no joy in doing so and we acknowledge that this has been a difficult issue for a number of members.”

Householder and four associates were arrested last July in a $60 million federal bribery case connected to legislation containing a ratepayer-funded bailout of two Ohio nuclear power plants. The Perry County Republican has staunchly maintained his innocence, pleaded not guilty to the charges and resisted calls from both parties that he resign.

Householder was one of the driving forces behind the nuclear plants’ $1 billion financial rescue, which would have added a new fee to every electricity bill in the state and directed over $150 million a year through 2026 to the plants near Cleveland and Toledo.

Previous attempts to bail out the nuclear plants had stalled in the Legislature before Householder became speaker. Months after taking over, he rolled out a new plan to subsidize the plants and eliminate renewable energy incentives. The proposal was approved in 2019 despite opposition from many business leaders and the manufacturing industry.

“A cloud will continue to hang over this chamber until we vote on this resolution and expel Rep. Householder,” Stewart continued.

Yet even as Householder's expulsion appeared to be gaining bipartisan momentum, Democrats complained that his fellow Republicans had inserted an 11th-hour amendment into the Senate version of the budget Wednesday that could be to his benefit.

The item would allow for a change in jurisdiction for certain public corruption cases from the Franklin County Prosecutor's Office, which traditionally handles all such cases, to the defendant’s home county. The current Franklin County prosecutor is a Democrat.

“It’s curious that after more than 60 years of GOP control, now Franklin County has a Democratic prosecutor — one who could actually prosecute public corruption crimes at the Statehouse — House Republicans decide to change the rules," Democratic state Rep. David Leland, of Columbus, said in a statement. "Why should we let those accused of public corruption get to pick their own prosecutor?”

Republicans and Democrats joined forces shortly after the federal affidavit was released last summer to remove Householder from the speakership, but further efforts against him stalled. A committee was set up soon after to address the repeal of the legislation at the center of the federal investigation, eventually dismantling two key parts of the corruption-ridden law in late March.

But even as a bipartisan effort took place to clean up the legislative disarray, a majority of Republican lawmakers continued to block Democratic attempts to remove Householder from his seat for nearly a year.

On Thursday, Democratic Rep. Jeffrey Crossman acknowledged the effort by his GOP colleagues to join the campaign to expel Householder but highlighted that it is nearly a year late.

Householder's successor, Speaker Bob Cupp, previously made clear that he believes the lawmaker should have resigned after his arrest, but he would not put his weight behind any resolution. Week after week, reporters probed Cupp on the status of Householder's standing in the chamber, and week after week, he said the same thing: “I have nothing further to report.”

Behind the scenes, the holdup was a number of GOP members who were not on board to expel him while he has not yet been convicted of the charges against him.

“This is not a witchhunt. This is not a Russiagate. This is not cancel culture,” Stewart said. “These are conservative U.S. attorneys that considered this evidence and believed a crime was committed here.”

If Householder is convicted of the federal charges against him, he could face up to 20 years in prison and automatic removal from the House.