Nashville's chief said he believes 'officers did everything they could legally' on a visit to the bomber's home last year but maybe 'could have followed up more.' 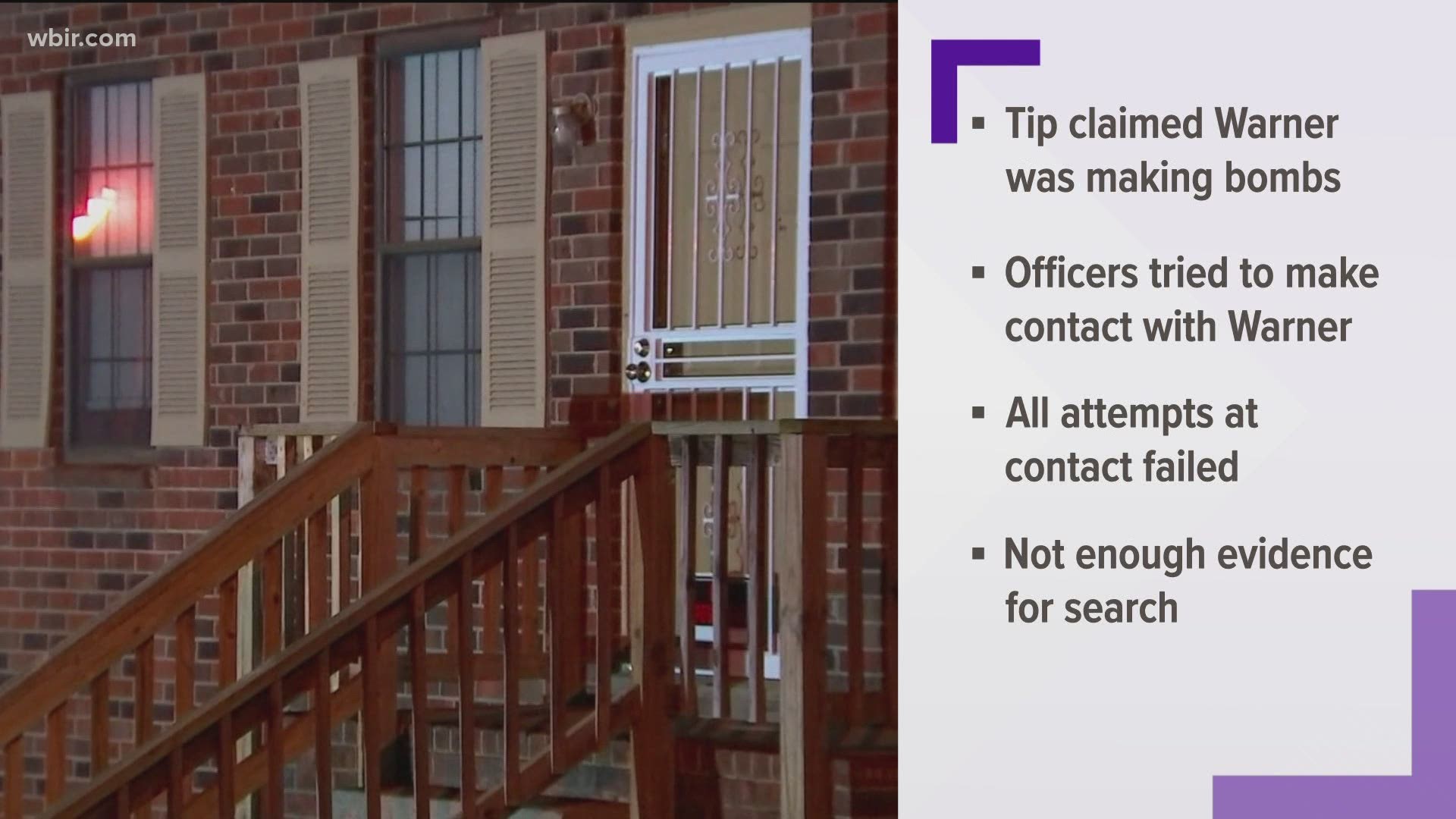 NASHVILLE, Tenn. — More than a year before Anthony Warner detonated a Christmas Day bomb in downtown Nashville, officers visited his home after his girlfriend told police he was building bombs in a recreational vehicle at his residence, according to documents. But they did not make contact with him, or see inside his RV.

Those revelations, contained in a newly disclosed 2019 incident report, put Nashville's police chief on the defensive Wednesday as he said his officers did nothing wrong and that they had handled the situation properly. He added that other than a 1970s marijuana-related arrest, Warner was “squeaky clean.”

“I believe the officers did everything they could legally. Maybe they could have followed up more, hindsight is 20/20,” Metro Nashville Police Chief John Drake said at a news conference.

Officers were called to Pamela Perry’s Nashville home on Aug. 21, 2019, following a report from her attorney that she was making suicidal threats while sitting on her front porch with firearms, the police department said in a statement.

According to the incident report, when officers arrived, police said she had two unloaded pistols beside her on the porch. She told them the guns belonged to “Tony Warner” and she did not want them in the house any longer. Perry, then 62, was taken for a psychological evaluation after speaking to mental health professionals.

“During that visit, before leaving for the evaluation, Perry told police that her boyfriend was making bombs in an RV,” the report stated.

The report says police went to Warner’s home, about 1 and 1/2 miles (2.4 kilometers) away, but he didn’t answer the door when they knocked repeatedly. They saw the RV but it was in a fenced-off backyard and officers couldn’t see inside the vehicle. They also spotted several security cameras and wires attached to an alarm sign on a front door.

“They saw no evidence of a crime and had no authority to enter his home or fenced property,” the police statement said, adding supervisors and detectives were then notified.

“If we could have had more to go off of, it would have been good,” Drake said.

Law enforcement officials did not publicly release the report, which was obtained only after news outlets submitted public records requests. Later, the Tennessee Bureau of Investigation announced that Warner’s only arrest was for a 1978 marijuana-related charge.

David Rausch, the TBI's director, had told reporters earlier this week that Warner was not on their radar. Rausch was flanked by federal and state officials — including Drake — who did not object or amend the statement.

Drake later told reporters Wednesday he didn’t learn of the report until late Sunday evening, but said he believed his officers that they could not smell any explosives and that there was no probable cause for a search warrant. He also added he didn't know why Rausch said Warner wasn't on anyone's radar.

Investigators are scrutinizing whether Warner believed in multiple conspiracy theories after being told by some of the people they’ve interviewed that Warner believed that shape-shifting reptiles take on a human form to take over society and that he discussed taking trips to hunt aliens, the official said. Investigators have also been asking witnesses whether Warner may have believed in any conspiracies about 5G technology.

The official could not discuss the investigation publicly and spoke to The Associated Press on condition of anonymity.

On Tuesday, Throckmorton told The Tennessean that Perry had fears about her safety and thought Warner might harm her.

After officers visited Warner's home last August, the police department’s hazardous devices unit was given a copy of the police report. During the week of August 26, 2019, they contacted Throckmorton. Police said officers recalled Throckmorton saying Warner “did not care for the police,” and that he wouldn’t allow Warner “to permit a visual inspection of the RV.”

Throckmorton disputes that he told police they couldn’t search the vehicle and says that he only represented Warner in a civil case several years prior.

“Somebody, somewhere dropped the ball,” he said.

A day after officers visited Warner's home, the police report and identifying information about Warner were sent to the FBI to check their databases and determine whether Warner had prior military connections, police said. The FBI eventually reported back that they had no such records after conducting a standard agency-to-agency record check.

No other information about Warner came to the department or the FBI’s attention after August 2019, police said.

The bombing occurred Christmas morning well before downtown streets were bustling with activity. Police were responding to a report of shots fired Friday when they encountered the RV blaring a recorded warning that a bomb would detonate in 15 minutes. Then, inexplicably, the audio switched to a recording of Petula Clark’s 1964 hit “Downtown” shortly before the blast. Dozens of buildings were damaged and several people were injured.

Investigators have not uncovered a motive.