Mayor Jacob Frey reacted emotionally after viewing a video clip that reportedly shows an officer kneeling on the man's neck while he begged for help. 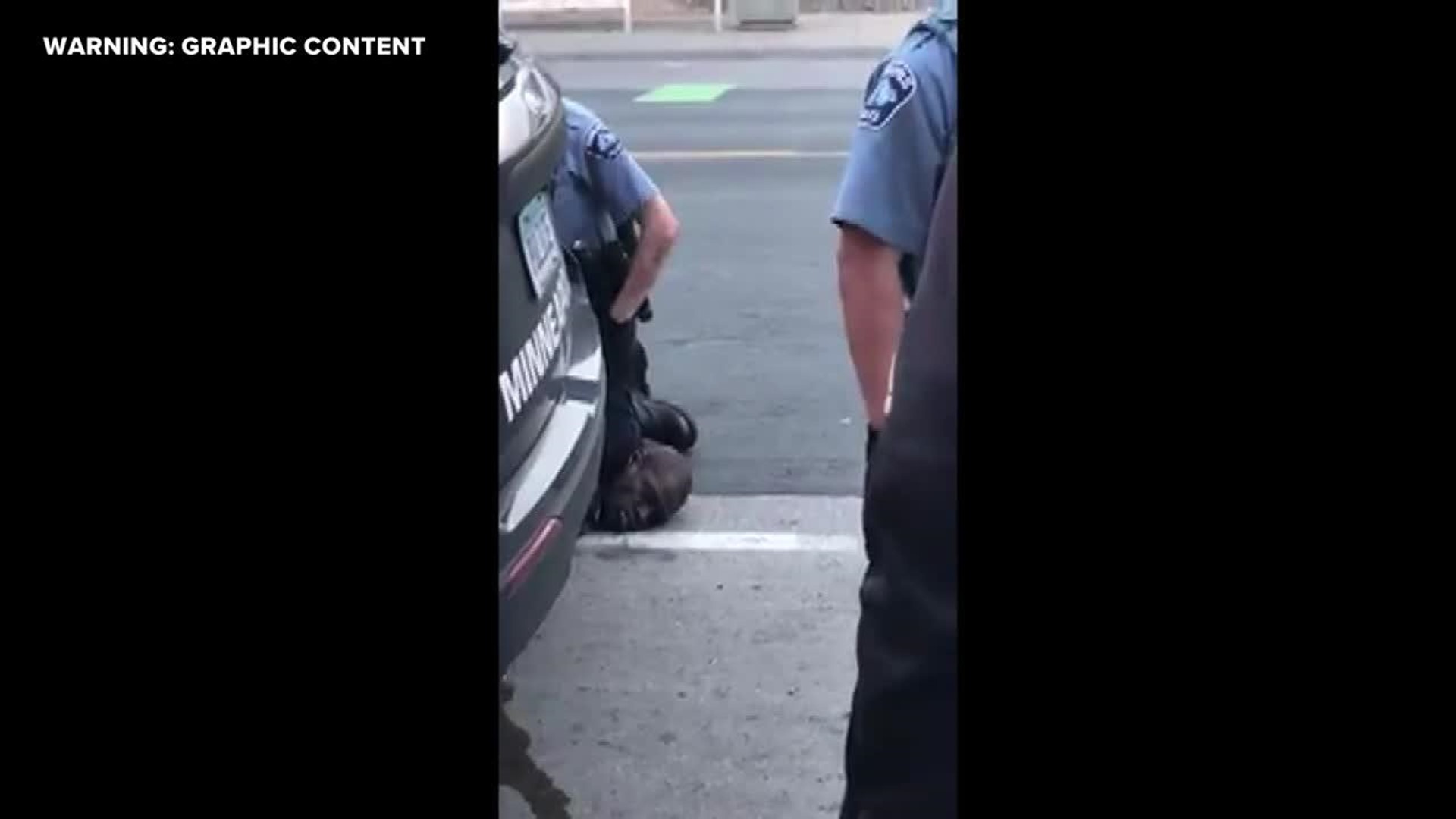 WARNING: This article contains graphic video that some may find disturbing. Viewer discretion is advised.

Agents from the FBI and the Minnesota Bureau of Criminal Apprehension (BCA) have been called in to investigate possible civil rights violations after Floyd died while in Minneapolis police custody Monday, with a bystander video capturing him calling for help.

"This is the right call," Frey wrote on Twitter as he announced the firing of the officers.

Squads were called to the 3700 block of Chicago Avenue South shortly after 8 p.m. on reports of a forgery in progress. According to a press release from Minneapolis Police, they were advised that the suspect was sitting on top of a vehicle and appeared to be under the influence.

Police arrived and found the man, described as being in his 40s, inside his car. He was told to get out of his car by the officers, and proceeded to physically resist them, according to the police press release.

A videotape that appears to capture the encounter shows an officer kneeling on the man's neck as he begs for help, saying "I cannot breathe." After several minutes, the man on the ground stops moving. A bystander can be heard saying "his nose is bleeding" and later, "did they (expletive) kill him?"

After several minutes, the man on the ground stops moving. Police called an ambulance and the suspect was taken to Hennepin County Medical Center, where he was pronounced dead.

Attorney Benjamin Crump identified the man who died as George Floyd, and said he is representing the family. He issued a statement on Twitter, saying, "This abusive, excessive and inhumane use of force cost the life of a man who was being detained by the police for questioning about a non-violent charge."

Crump went on to say that they will "seek justice for the family" and demand answers from police. He has handled a number of high-profile civil rights cases, representing the families of Trayvon Martin, Michael Brown, Tamir Rice and Ahmaud Arbery, to name a few.

Police say the body cameras of officers were on and activated during the incident. All body camera footage has been turned over to the BCA, which investigates most police shootings and in-custody deaths.

Hennepin County Attorney Mike Freeman, who in most cases will make the decision on whether criminal charges might be filed in the case, released a statement after viewing the video of the incident.

"The Hennepin County Attorney’s Office is shocked and saddened by what appeared in a recent video. The BCA and FBI are both investigating this case. This office, through several of our most veteran prosecutors, is assisting in directing that investigation. We are also in consultation with the US Attorney," Freeman wrote.

"At the end of the investigation, the findings will be presented to our office for consideration of prosecution. We promise a thorough, expedited review consistent with our on-going commitment to justice. Every person is entitled to fairness; no person stands above the law."

Early Tuesday Minneapolis Mayor Jacob Frey appeared at a media briefing with Chief of Police Medaria Arradondo. Frey was emotional and clearly rattled by the video clip he had watched, and in his words, replayed over and over in his mind as he searched for words to describe what he had seen.

"He should not have died," Frey said definitively. "For five minutes we watched as a white officer pressed his knee to the neck of a black man. For five minutes. When you hear someone calling for help, you are supposed to help. This officer failed in the most basic human sense. What happened on Chicago and 38th this last night was simply awful."

Frey then apologized to the family of the man, who had not yet been identified, and the black community of Minneapolis.

The Mayor's counterpart across the river, St. Paul Mayor Melvin Carter, also weighed in on his Twitter account.

Senator Amy Klobuchar, a former Hennepin County Attorney and prosecutor, viewed the tape and is calling for immediate action. "We heard his repeated calls for help. We heard him say over and over again that he could not breathe. And now we have seen yet another horrifying and gutwrenching instance of an African American man dying," Klobuchar posted on Twitter. "There must be a complete and thorough outside investigation into what occurred, and those involved in this incident must be held accountable."

Chief Arradondo said earlier Tuesday that the officers involved in the incident are on "relieved of duty" status, which means they will have no law enforcement duties or responsibilities while the investigation unfolds. Frey announced later in the day that four officers have been terminated.

"We clearly have policies in place regarding placing someone under control and what areas that could be of risk, so that will be part of the full investigation," Arradondo said. "That we'll do internally, the use of force review, but certainly the FBI will be looking at that as well.”

Arradondo told reporters he received additional information from a community source following the fatal incident that provided him additional context to what had happened. That information helped convince him to call the FBI's Agent-in-Charge, who agreed to take the lead in a civil rights probe.

Mayor Frey says regardless of the outcome, one thing is clear to him. "Whatever the investigation reveals, it does not change the simple truth ... that he (the man who died) should be with us this morning."

Councilwoman Andrea Jenkins, who represents the neighborhood where the incident took place, issued a statement.

“My heart is breaking for the tragic loss of life last night near 38th and Chicago. Our community continues to be traumatized again, and again and again. We must demand answers," Jenkins wrote. "I have spoken with the Mayor and have a call in to the chief. I vow to be as transparent and forthright with the community. We were already in the midst of developing a summer safety strategy for this neighborhood but immediate action is required now. Currently the BCA is investigating."

"Please stay strong sisters and brothers, these are trying times."

Councilwoman Jenkins also says a summer safety strategy for the neighborhood is already being developed due to rising crime rates in the area.