The PDSA award is considered the animal equivalent of the U.K.'s George Cross, a decoration for heroism. Before Magawa, all the medal recipients were dogs. 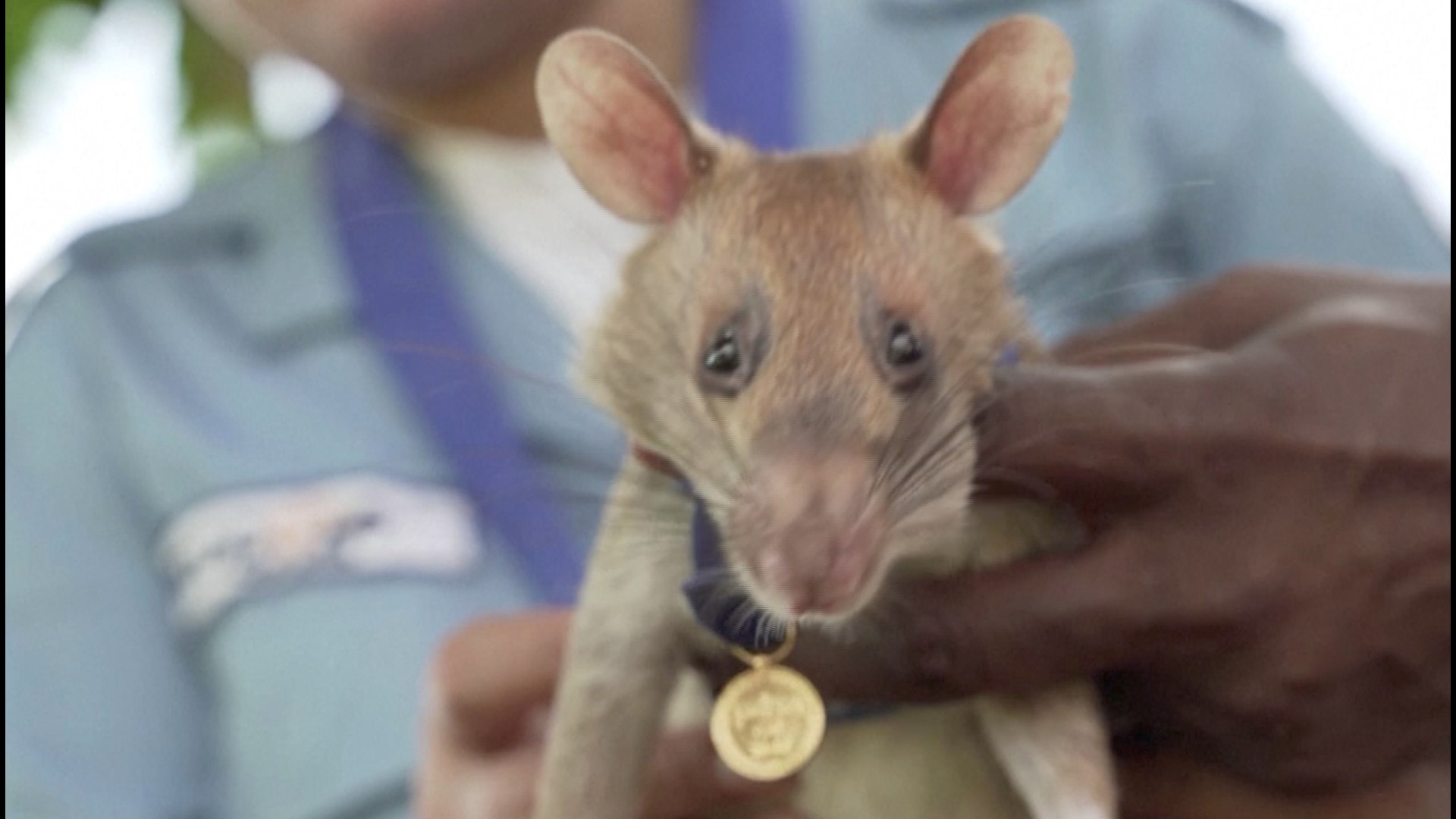 LONDON, UK — A rat has for the first time won a British charity's top civilian award for animal bravery, receiving the honor for searching out unexploded landmines in Cambodia.

Magawa, a giant African pouched rat, was awarded the PDSA’s Gold Medal for his "lifesaving bravery and devotion” after discovering 39 landmines and 28 items of unexploded ordinance in the past seven years, according to the charity.

First known as the People's Dispensary for Sick Animals, PDSA started as a free veterinary clinic in 1917 and has heroic animals since 1943.

Magawa was trained by a Belgian organization that has taught rats to find landmines for more than 20 years. The group, APOPO, works with programs in Cambodia, Angola, Zimbabwe and Mozambique to clear millions of mines left behind from wars and conflicts.

Magawa is the group’s most successful rat, having cleared more than 141,000 square meters of land, the equivalent of some 20 soccer fields.

“But also it is big for the people in Cambodia, and all the people around the world who are suffering from landmines,’’ Cox said. “The PDSA Gold Medal award brings the problem of landmines to global attention.”

Drumroll please! 🥁 Say hello to Magawa 👋 the first rat to be awarded the #PDSAGoldMedal & one of APOPO's @HeroRATs trained to detect landmines 🐀 He's discovered 39 landmines making him their most successful HeroRAT🦸‍♂️ Watch his full story here 👀: https://t.co/so5CNCWlUw pic.twitter.com/YrVy2NWotW

More than 60 million people in 59 countries continue to be threatened by landmines and unexploded ordinance, according to APOPO. In 2018, landmines and other remnants of war killed or injured 6,897 people, the group says.

While many rodents can be trained to detect scents and will work at repetitive tasks for food rewards, APOPO decided that giant African pouched rats were best suited to landmine clearance because of their African origins and lifespan of up to eight years.

Their size allows the rats to walk across mine fields without triggering the explosives - and do it much more quickly than people.

The PDSA’s Gold Medal has been awarded since 2002 to recognize bravery and acts of exceptional devotion by animals in civilian service. It is considered the animal equivalent of the George Cross, a decoration for heroism.

Before Magawa, all the recipients were dogs.

PDSA also awards the Dickin Medal for military service. The medal has been awarded to 34 dogs, 32 pigeons, four horses and one cat since it was created in 1943.

Credit: AP
In this undated photo issued by the PDSA, People's Dispensary for Sick Animals, Cambodian landmine detection rat, Magawa is photographed wearing his PDSA Gold Medal, the animal equivalent of the George Cross, in Siem, Cambodia. (PDSA via AP)