Regulators recommended a third dose of Pfizer's vaccine for those 65 or older and approved them for others with preexisting conditions and high-risk work settings. 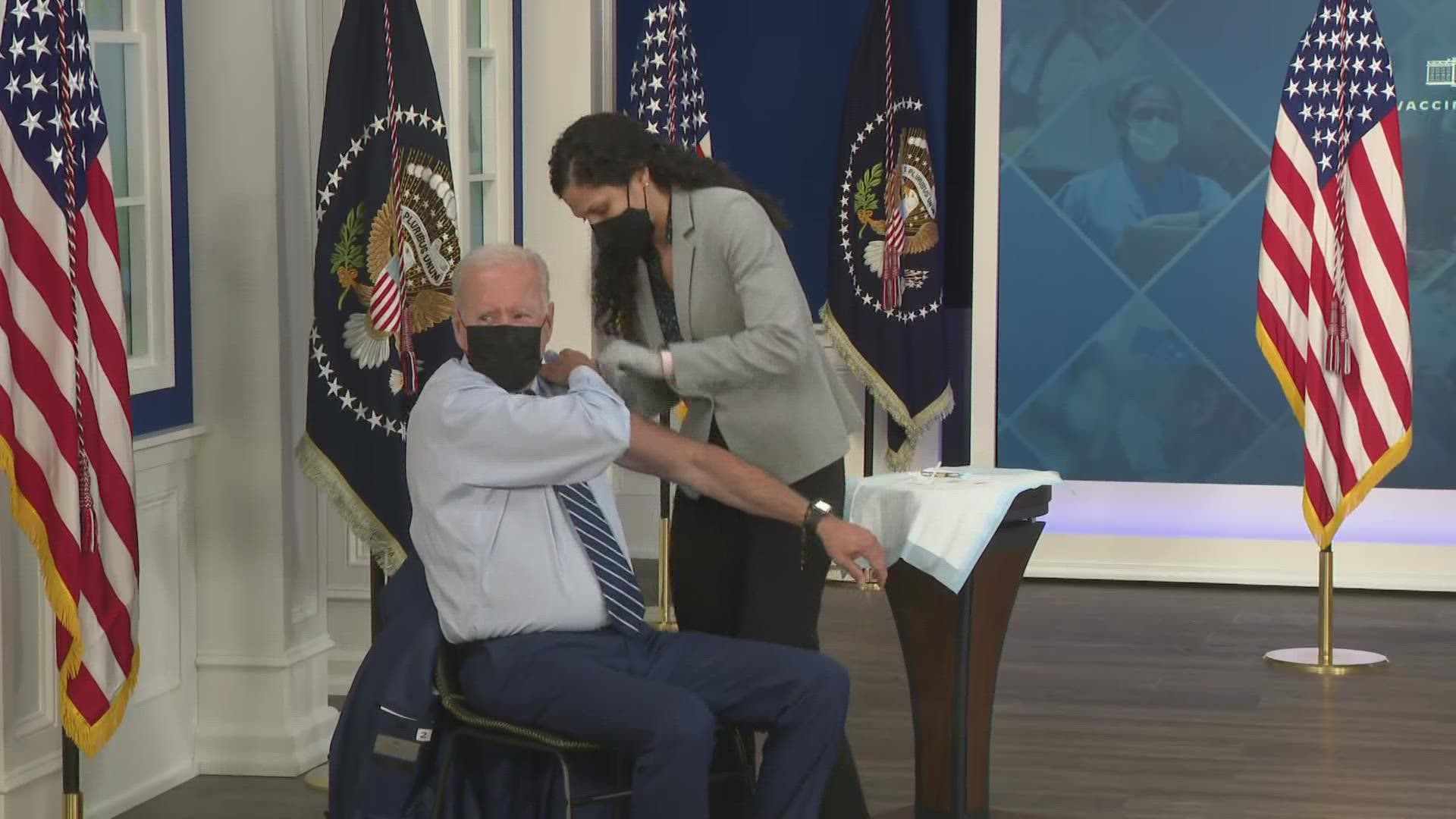 WASHINGTON — President Joe Biden got his COVID-19 booster shot on Monday, as part of the administration's efforts to encourage Americans to get vaccinated.

During brief remarks before receiving his booster shot at the White House, the president said that boosters are important but the key is getting more people vaccinated.

Biden once again declared the situation has become a "pandemic of the unvaccinated."

Last week, federal regulators recommended a third dose of the Pfizer vaccine for Americans age 65 or older and approved them for others with preexisting medical conditions and high-risk work environments.

Biden got his first shot on Dec. 21 and his second dose three weeks later, on Jan. 11, along with his wife, Jill Biden. The president said the first lady was not getting her booster shot at the same time as him because she was teaching today.

Who is eligible for a booster? ⬇️ pic.twitter.com/cIFZmx0uke

Vice President Kamala Harris, 56, received the Moderna vaccine, for which federal regulators have not yet authorized boosters — but they are expected to in the coming weeks.

As the Associated Press previously reported, more than 40 million doses of coronavirus vaccines are available, according to U.S. health authorities who said they are confident there will be enough for both qualified older Americans seeking booster shots and the young children for whom initial vaccines are expected to be approved in the not-too-distant future.

The spike in demand — expected following last week's federal recommendation on booster shots — would be the first significant jump in months. More than 70 million Americans remain unvaccinated despite the enticement of lottery prizes, free food or gifts and pleas from exhausted health care workers as the average number of deaths per day climbed to more than 1,900 in recent weeks.

Federal and state health authorities said current supply and steady production of more doses can easily accommodate those seeking boosters or initial vaccination, avoiding a repeat of the frustratingly slow rollout of COVID-19 vaccines across the country early this year.

Among the challenges states face is not ordering too many doses and letting them go to waste. Several states with low vaccination rates, including Idaho and Kansas, have reported throwing away thousands of expired doses or are struggling to use vaccines nearing expiration this fall.

While most vaccines can stay on the shelf unopened for months, once a vial is opened the clock starts ticking. Vaccines are only usable for six to 12 hours, depending on the manufacturer, according to the U.S. Food and Drug Administration.

State health officials said they have tried to request only what health care providers and pharmacies expect to need from the federal supply. Those numbers have dwindled since the vaccines became widely available in early spring.

But U.S. officials — holding out hope that some of the unvaccinated will change their minds — are trying to keep enough vaccines in stock so all Americans can get them.

That balancing act is tricky and can lead to consternation around the globe as the U.S. sits on unused vaccines while many countries in places such as Africa can't get enough vaccines.

"Somebody sitting in a country with few resources to access vaccines, seeing people in the U.S. able to walk into a pharmacy and get that vaccine and choosing not to, I'm sure that's causing heartache," said Jen Kates, senior vice president and director of global health and HIV policy for the Kaiser Family Foundation.

Dr. Marcus Plescia, chief medical officer of the Association of State and Territorial Health Officials, which represents the public health agencies of all 50 U.S. states, the District of Columbia and U.S. territories, said officials anticipate that on-hand doses of COVID-19 vaccines and manufacturers' ability to supply more will meet needs across the country.

"I think states have tried to plan as if everybody's going to be offered a booster," he said, suggesting they will be overprepared for the more narrow recommendations issued by the FDA and the Centers for Disease Control and Prevention.

California, for example, estimated earlier this month that it would need to administer an extra 63 million doses by the end of 2022 — if initial shots for children under 12 were approved and boosters were open to everyone.

U.S. health officials late Thursday endorsed booster shots of the Pfizer vaccine for all Americans 65 and older — along with tens of millions of younger people who are at higher risk from the coronavirus because of health conditions or their jobs.

Dr. Mark Ghaly, California's health secretary, said the state will rely largely on pharmacies and primary care providers to give boosters to seniors while some large counties and health care groups will use mass vaccination sites.

In Pennsylvania, more than 67% of residents older than 18 are fully vaccinated. Alison Beam, acting secretary of health, said health authorities now have "two missions": Continuing to persuade people to get vaccinated and serving those eager to receive a booster or initial shots.

"Pennsylvania is going to be prepared," Beam said. "And we're going to have the right level of vaccine and vaccinators to be able to meet that demand."