Florida has long loomed large in national politics, but next year’s race for governor has significant national implications. 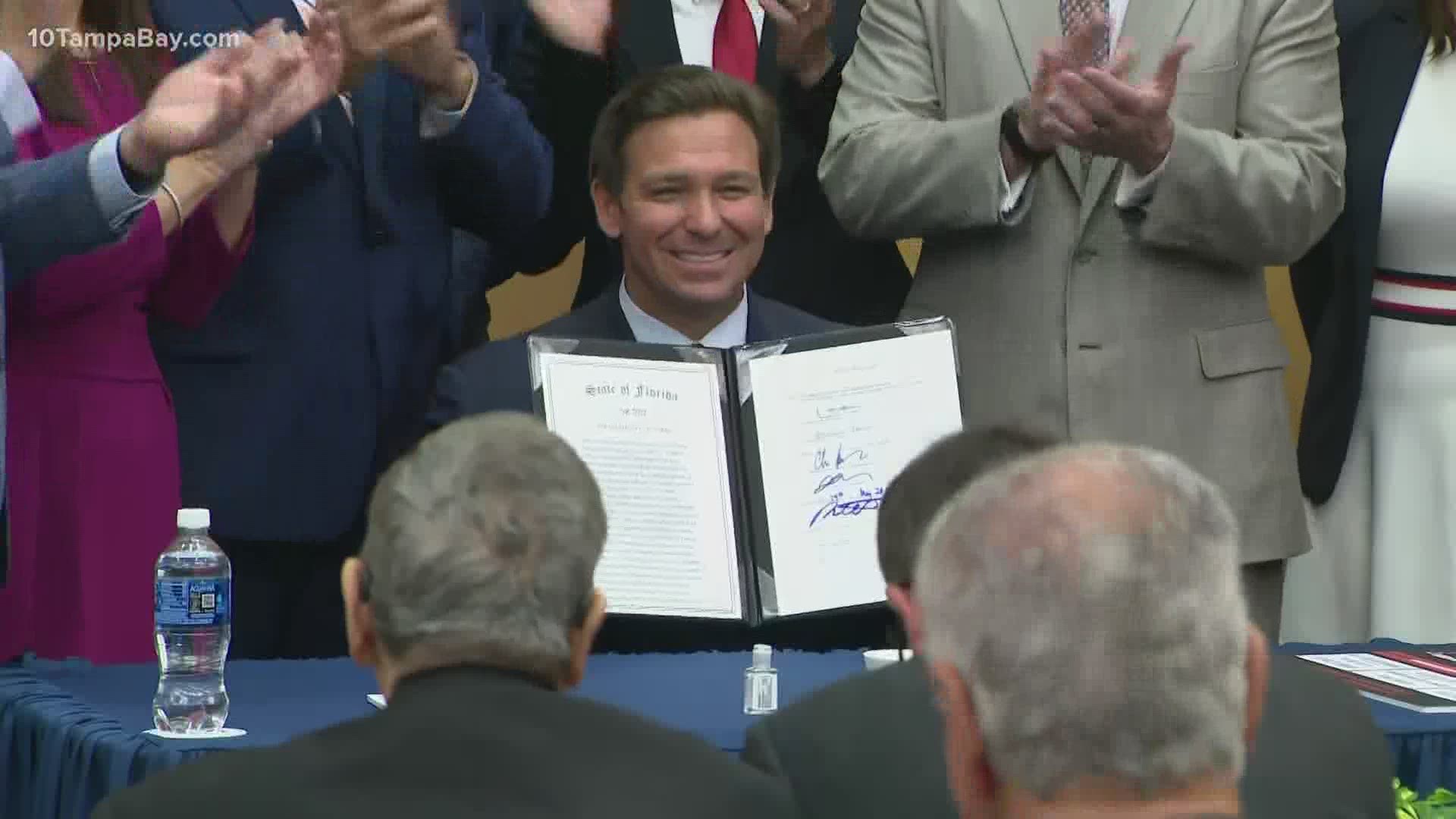 TALLAHASSEE, Fla. — As Florida Gov. Ron DeSantis struggled to contain the coronavirus pandemic, Democrats readied to pounce. The state's economy was in tatters, infections and deaths were on the rise and there were doubts about the Republican's plan to lead Florida out of crisis.

Now that the pandemic appears to be waning and DeSantis is heading into his reelection campaign next year, he has emerged from the political uncertainty as one of the most prominent Republican governors and an early White House front-runner in 2024 among Donald Trump's acolytes, if the former president doesn't run again.

As DeSantis' national stature has risen, he has remained defiant in the face of continued attacks on his hard-line opposition to mask mandates and lockdowns.

“Hold the line. Don’t back down,” he told a crowd at a party fundraiser in Pittsburgh on May 20. “And in the state of Florida, with me as governor, I have only begun to fight.”

That fight will happen soon, as he campaigns for a second term and pressure builds on Florida Democrats to regain their footing in a state that has swung toward Republicans for several election cycles. Unless they find a new formula, Democrats could find themselves shut out of statewide office for the first time since Reconstruction.

“This isn’t just one race — this is two races in one, given how Ron DeSantis is trying to use a reelection win as a slingshot to then be the odds on favorite" for the GOP nomination in 2024, said Fernand Amandi, a Democratic pollster in Miami. “If they manage to prevent him from getting reelected, they almost certainly eliminate any possibility of him running for president.”

DeSantis won in a nail-biter three years ago against Democrat Andrew Gillum, and Democrats worry whether they can field a candidate able to win back the governor’s mansion for the first time since 1994.

U.S. Rep. Charlie Crist, a former Republican governor who is now a Democrat, announced his campaign for governor this month. Agriculture Commissioner Nikki Fried, the only Democrat currently holding statewide office, has teased a June 1 date to publicly announce whether she will run.

Some Democrats had hoped U.S. Rep. Val Demings, who helped manage the first Trump impeachment and was considered as President Joe Biden's running mate, would join the race. Instead, she is considering a run for the U.S. Senate seat now held by Republican Marco Rubio.

Regardless of who gets in the Democratic contest, toppling DeSantis will be “a tall order,” said Ryan Tyson, a Tallahassee-based Republican pollster. “The Democrats fail to understand that the state of Florida is changing under their very noses.”

Florida’s population continues to boom, but many of the state’s new residents are older and come from parts of the country friendlier toward Republicans. Before last November’s presidential election, Republicans had narrowed the registration gap with Democrats to about 117,000. On Election Day four years earlier, Democrats had a 327,000 voter registration lead. Since then, Republicans have continued to gain — with the Democratic advantage now barely over 100,000.

Both sides will try to nationalize the race, partly to draw support from big-money donors from outside the state. For DeSantis, it’s also about raising his national profile.

That of course, probably will become a line of attack for Crist and Fried, who accuse DeSantis of being more interested in pursuing his political ambitions than in tackling the concerns of Floridians.

“Just like our former president, he always takes credit but never takes responsibility,” Crist said when he announced his bid for governor. In a video hinting at her possible entry into the race, Fried called DeSantis an “authoritarian dictator.”

Appealing to Trump supporters might be smart as the Republican Party deepens its allegiance to the former president, whose shadow will no doubt loom over high-profile races like the one about to unfold in Florida.

During his Pittsburgh visit, DeSantis applauded Trump for recognizing the military and economic threats posed by China and sympathized with him over his battles against social media companies such as Twitter, which banned him from its platform.

The governor is “definitely made efforts to to appeal to the Trump base. The disadvantage to that, of course, is that the former president is so polarizing,” said Kevin Wagner, a political scientist at Florida Atlantic University. ”But in the state of Florida, where the former president did really well, appealing to his base of voters seems like a pretty prudent move.”

DeSantis’ ambitions could become muddled if Trump runs in 2024. That would force DeSantis and other hopefuls to wait it out or begin redefining themselves beyond Trump's shadow.

Democrats thought the pandemic would be a strong line of attack against DeSantis.

In November, Floridians were about evenly divided about the governor's handling of the pandemic, with 49% approving and 50% disapproving, according to AP VoteCast. In that same poll, 48% had a favorable opinion of DeSantis while 45% viewed him unfavorably.

But with about 18 months before the November 2022 election, it remains to be seen how the pandemic might play out in the campaign. The pandemic has become a key talking point against what DeSantis called “the militant left.”

“We’ve saved millions of livelihoods from the brunt of lockdowns," he said in Pittsburgh. "All I can say to any state that has not followed suit: Open your state, open your schools, take off these mask mandates, let people live and thrive.”

While he spent his first years as Florida governor casting himself as a defender of the environment, including the state’s cherished Everglades and imperiled coastlines, and even as a booster for his state’s underpaid teachers, DeSantis has more recently taken a sharper turn to the right.

On a recent appearance on Fox News — one of many — DeSantis showcased a freshly signed law that tightens voting rules amid unproven claims among Trump followers that Trump was denied a second term because of election irregularities.

“The governor’s priorities certainly got through, and that can only be good for him,” said Susie Wiles, a Republican strategist who helped Trump win Florida last year and continues to work for him. “What is good for him has proven to be good for the state, which in turn makes his fortunes good going into reelection next year.”