Landon De La Rosa was sad when he saw the swing set at Muskegon's Pere Marquette Beach was gone. A letter he wrote has city officials, including the Mayor, thinking. 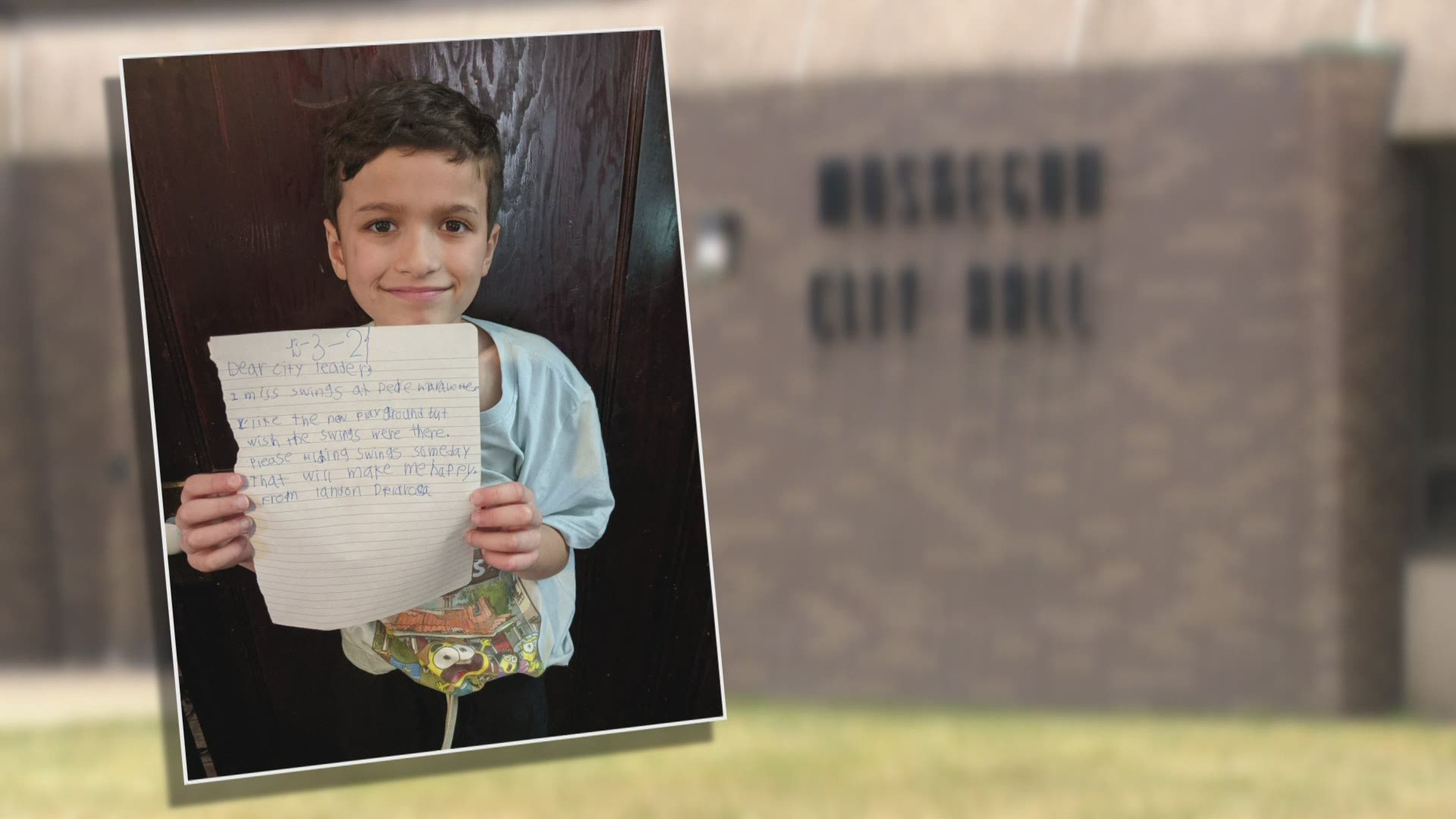 MUSKEGON, Mich. — We all have favorites, right? Favorite ice cream, music, movie or color — just to name a few.

A 9-year-old boy from Muskegon had a favorite swing set he played on, before the City decided to take it down. A letter he wrote to City Hall about it landed on the desk of the Mayor, who's strongly considering the boy's plea.

March is Reading Month, and the third grade class at Reeths-Puffer Central Elementary School had a challenge for its students: they needed to identify and discuss a 'Community Need.'

Landon De La Rosa knew immediately what the focus of his need would be.

"It's the swing set," said Landon. "I'd swing on them, then there were no swings and now we got to build them."

Credit: Sarah De La Rosa
Landon De La Rosa was so upset after the City of Muskegon removed his favorite swing set that he wrote a letter to City Hall, asking that it be returned.

Credit: Sarah De La Rosa
Landon De La Rosa was so upset after the City of Muskegon removed his favorite swing set that he wrote a letter to City Hall, asking that it be returned.

The swing set Landon is referring to was next to the pavilion at Muskegon's Pere Marquette Beach. Last year, the City took it down because it no longer complied with health and safety standards, then replaced it with a brand new, large jungle gym.

"We would always play at that playground and Landon just loved that swing," said Sarah De La Rosa, Landon's mother. "He was upset when he saw it was gone."

Landon, who has autism, decided to write a letter to Muskegon City Hall asking if the swing set could be brought back to the beach.

Credit: 13 ON YOUR SIDE
Landon De La Rosa wrote a letter to Muskegon City Hall asking that his favorite swing set be returned to Pere Marquette Beach.

Credit: Sarah De La Rosa
Before he mailed his letter to Muskegon City Hall, Landon De La Rosa posed for a photo with it.

Landon's letter read: "Dear City Leader, I miss swings at Pere Marquette. I like the new playground but wish the swings were there. Please bring swings someday that will make me happy."

Landon mailed the letter to City Hall on March 13. Not only was it received and reviewed by several city commissioners, it landed on the desk of the city's biggest leader — Mayor Steve Gawron.

"We don't get letters like that too often," said Mayor Gawron. "But when we do, you have to respond."

The Mayor was so taken aback by Landon's letter that he decided he wanted to meet the boy. There was no phone number on the letter, so the Mayor decided to do the next best thing.

He went to Landon's house, but nobody was home.

"I went there on a rainy day and dropped my [business] card off, just to let Landon and his family know, 'Hey, I got it,'" said Mayor Gawron.

Credit: Sarah De La Rosa
When Muskegon Mayor Steve Gawron visited Landon's home, nobody was there, so he left his card with a note on the back.

When the De La Rosas returned later that evening, they saw the Mayor's card and checked their security camera. Sure enough, Muskegon's Mayor was on their doorstep.

"We couldn't believe it," said Sarah.

A meeting was arranged for Landon and the Mayor to meet on March 24 after Landon got out of school. The rendezvous happened at the site of the former swing set at Pere Marquette Beach.

With Landon's letter in hand, the Mayor approached Landon and said, "I'm Mayor Steve. You sent a letter about the possibility of getting a swing set back, right?"

"Well, we're talking about it at City Hall and we're going to see what we can possibly work out."

Mayor Gawron says he's taking Landon's letter seriously and will look into the feasibility of adding a swing set to the existing play equipment.

"We want the kids' experience here to be the best as possible," said Mayor Gawron. "We can't make any promises but we are doing our homework, and if we decide we can add a swing set here, you can be sure my first phone call to break the news will be to Landon."

For Landon and his family, they never thought a simple class challenge about community needs might actually lead to that need being met.

Credit: 13 ON YOUR SIDE
After their important discussions about swing sets, Landon De La Rosa and Muskegon Mayor Steve Gawron show their solidarity.

"I think it's neat that they're looking into it," said Sarah. "Landon's voice was heard, even though he's only 9."