Machete Attack Victim: “I don’t think I should be alive”

Gerald and Debbie Russell are recovering in Grant Medical Center after they were attacked with a machete Thursday evening at the Nazareth Restaurant and Deli. 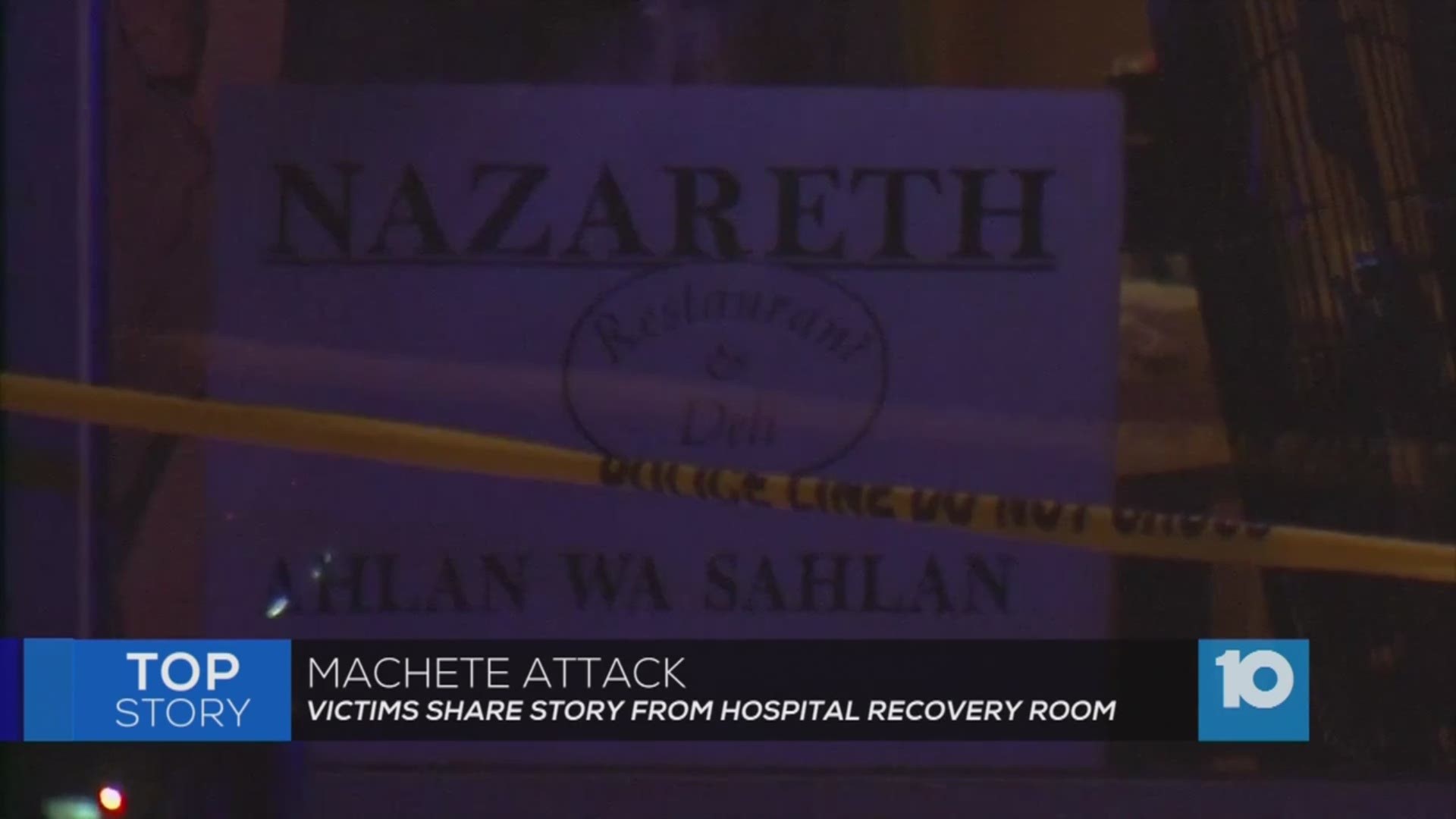 No matter how you look at it, 25 years is a long time. And each second is too valuable to waste.

High school sweethearts Debbie and Gerald Russell are getting a second chance to appreciate each passing moment together.

“You can’t beat that,” Gerald said.

Gerald remembers Mohamed Barry’s eyes when he walked into the Nazareth Restaurant and Deli, Thursday evening.

“I saw him walk in and he looked like he was there for a purpose,” he said. “He looked directly over at me, walked straight at me with a look of hatred and anger on his face, raised the machete up and started to attack me with it.”

Barry’s first blow was to Russell’s head. He says he put his hands up, trying to defend himself. He believes it wasn’t a straight cut and that he got hit with more of the blunt side of the blade.

Debbie was sitting across the table.

“I saw some man hitting my husband,” she said. “I stood up and started to cuss him out, which drew attention to me and away from [Gerald].”

Gerald says he pushed Barry away and ran to the back of the Nazareth Restaurant; a decision he regrets.

“But you have to understand how hard you were hit and how many times you were hit in the head,” Debbie told her husband from her hospital bed, Sunday. “It was fight or flight and if he didn’t leave, I don’t think he would have been living.”

Barry then turned his rage and blade to Debbie.

“I kind of deflected, kind of raised my arms,” she said. “I do remember ‘Ow, this is really solid’.”

The Russells say they had no clue Barry was holding a machete, but thought they were being attacked with a blunt object, like a baton.

Barry stopped his attack on Debbie and began attacking others. Debbie says she remembers him assaulting local musician, Bill Foley.

“[Barry] was wailing on that person,” she said. “He was doing everything he could to destroy that person.”

Debbie says she ran outside, where she met up with her husband.

“Sitting in the ambulance on the way over [to the hospital] we both looked at each other and said ‘You know what – we’re both alive – we can’t ask for anything more than that’,” Gerald said.

Debbie was cut below her wrist to the bone. Three tendons were torn in her right hand. Her left hand had one severed artery in one finger. Another artery was bruised, which resulted in a blood clot. She says she almost lost that finger. Gerald had to have tendons repaired in two fingers and has multiple cuts on his hands. Debbie was in surgery for five-and-a-half hours, while Gerald was in surgery for an hour-and-a-half at Grant Medical Center.

On a day that focuses on love the Russells are focusing on recovery.

And are making the most of every second, together.

“We’re going to be together,” she said.

“We’re going to be right next to each other, together, the whole time,” Gerald said.

The couple remains in Grant Medical Center. They are hoping to be discharged this week.