A man is dead after what authorities are calling a workplace accident in west Columbus. 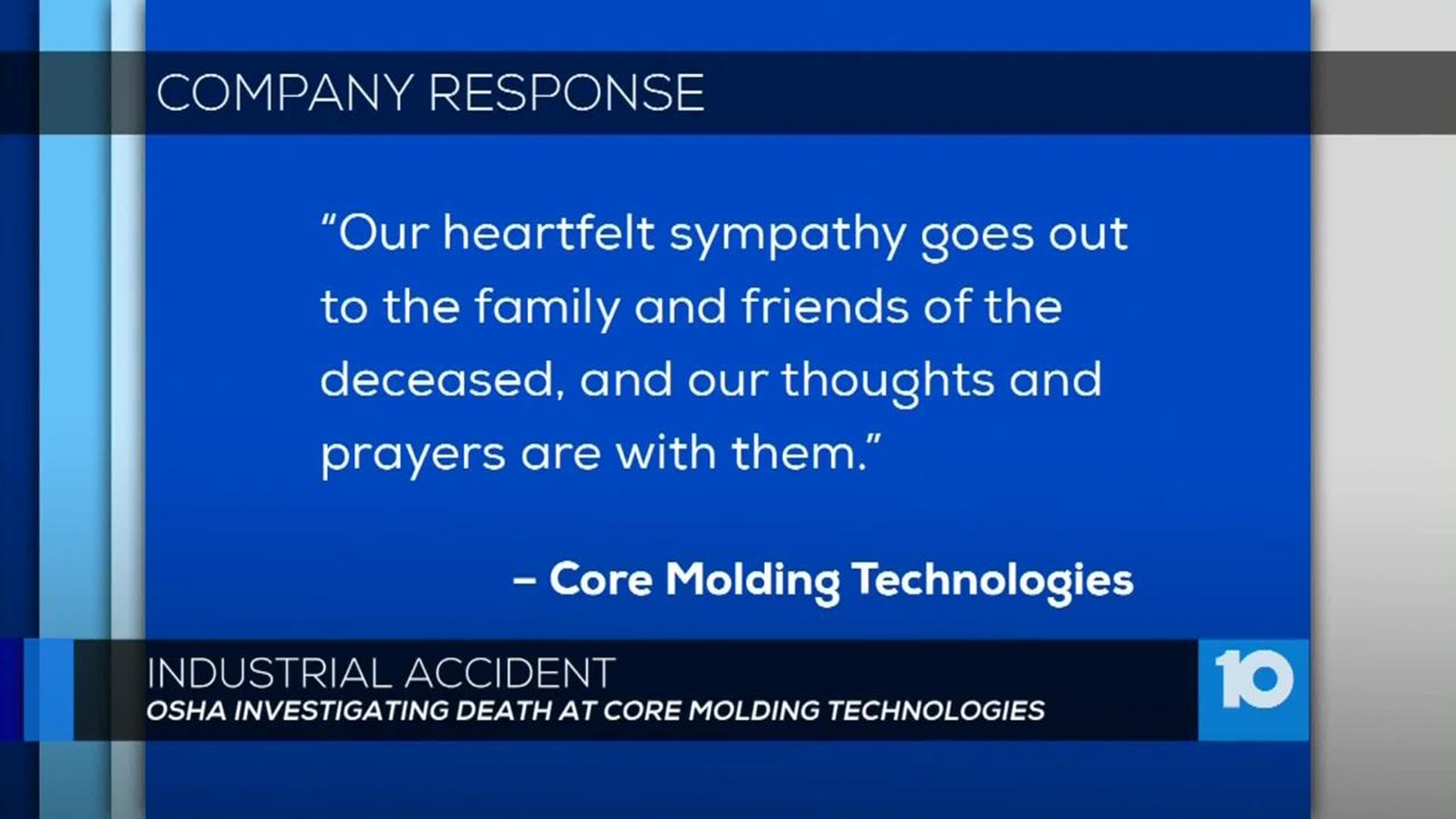 A man is dead after what authorities are calling a workplace accident in west Columbus.

Columbus police say 60-year-old Timothy Underwood, an employee of Core Molding Technologies on Manor Park Drive, was working in a press area with a co-worker when he was crushed to death by a hydraulic press just after 5 a.m. Monday.

Underwood suffered "catastrophic" injuries to his head and was pronounced dead at the scene.

Police told 10TV some sort of miscommunication occurred shortly before the incident.

Other employees at the business were present when the catastrophic injury happened. They were offered counseling to help cope with the tragedy.

“Core Molding Technologies, Inc. is deeply saddened to report that an accident at our Columbus, Ohio plant took the life of one of our valued employees. Our heartfelt sympathy goes out to the family and friends of the deceased, and our thoughts and prayers are with them. We are fully cooperating with the authorities who currently have investigations underway to determine the cause of this accident. We will be offering grief counseling on-site over the next several days and thereafter as needed for all employees.

Columbus Police Department's homicide unit determined the death was not suspicious. They said Underwood had worked at the business for about one year.

Officers do not plan to press charges at this point and are handing the investigation over to the Bureau of Workers Compensation and OSHA.

OSHA records indicate the business did have several serious violations over the last two years. Details on what those were and whether any of them involved the hydraulic press have not been released.

John Carr, the spokesman for IAMAW International, said the union is working with Core Molding Technology management to better understand how the death happened.

"The investigation will shed more light, but right now our thoughts are with the family and the extended family, his coworkers," Carr said.

The IAM sends condolences, and our sincere sympathies to the family of Brother Underwood, on this tragic loss. The IAM Safety Committee, and Representatives remain ready to assist, and cooperate with OSHA, and the company in the ongoing investigation in any means necessary. We have also extended to the company our intent to assist to provide our membership any assistance they may need. The IAM, and our Representatives will not speculate, or offer any detailed information regarding the accident, while OSHA is conducting their investigation.

Our core belief, one that we strive, and fight for is that no worker, anywhere should report to work without the knowledge that they will return home at the end of the day, safely to their families.

T. Dean Wright, Jr., the President, and Directing Business Representative of IAM District Lodge 54, of which IAM Local 1471 is a member issued the following statement:

On behalf of the entire District 54 family I send our deepest sympathies, and heartfelt condolences to the member’s family, as well as all of his extended family - his coworkers at Core Molding. Work is the common tie we all share, our very foundation is based upon workers’ rights on the job, and chief among these is their safety. Our members, indeed - our Brothers and Sisters, and workers everywhere, should report to their jobs with the belief, and expectation of doing so safely, to return to their loved ones every day.