Based on the jury’s findings, Quentin Smith is eligible for the death penalty. 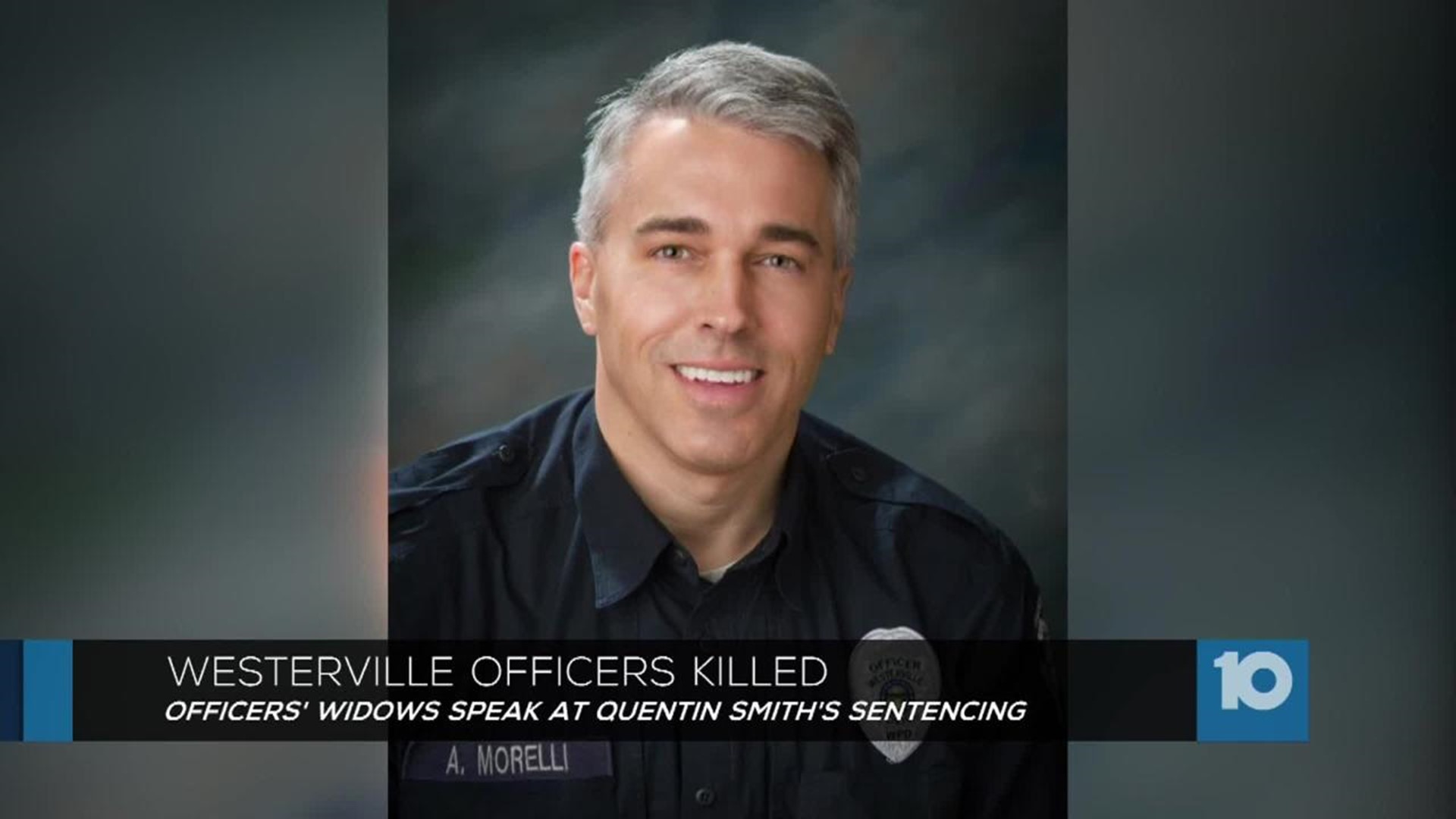 COLUMBUS, Ohio — The widows of two Westerville Police officers killed in the line of duty broke their silence Monday.

On Friday, a jury convicted Smith on all counts.

This week, the focus turns to his sentence, as the defense tries to save a killer's life.

The widows of officers Joering and Morelli asked 10TV not to show their faces as they testified.

Both told the jury how the actions of Smith devastated them and their families.

"I was lucky enough to marry my best friend and have a terrific marriage," Linda Morelli said. "I would like everyone to know that Tony was not just an officer — that he was a son, a brother, a husband and a father."

She and officer Morelli were married almost 30 years. He was killed four months before their daughter's wedding.

"Tony looked forward to walking our daughter down the aisle at her wedding last year. But he wasn't there. Tony won't see his son get married someday and watch him become a father."

Instead of her father's arm, Morelli's daughter had to settle for a heart made from his shirt sewn into her dress.

"I can no longer kiss him good-bye," said Linda through tears. "I no longer have my best friend. I miss the post-it notes that he would leave for me in various places around the house, telling me that he was proud of me, to have a great day, or just that he loved me. I miss slow dancing in the kitchen with him while we cooked dinner. I miss him singing to me, I miss his humor and his laughter."

Jami Joering spoke to her husband moments before he was sent on what would be his final call.

"We hung up and I texted him to say something felt off and I wanted to vomit," she said. "I attempted to contact him again at 12:21, except this time, no response. I later found out it was because he had been murdered."

"Our 6-year-old at the time couldn't understand why someone would do such a thing, and in her innocence, the first thing she told me, she didn't have anything black to wear so she could look pretty for her daddy. The girls to this day will call his cell phone to hear his voice on the voicemail, because that's the only thing that brings them comfort. They will text him to wish them happy birthday, or simply tell them about their day. They so badly want them back home to tuck them in at night or watch movies together as family. How do you fix that? The answer is you really truly can't. But I'm trying my best and so are our girls."

"My husband died a hero that day," Joering said. "I'm proud that he walked in with his head held high and saved Candace (Smith) and her daughter. Because he took an oath to serve and protect, and he died that day doing just that."

The defense reminded jurors that they are to make their decision free of bias, prejudice and emotion.

They say Smith is mentally ill and a product of a chaotic, abusive upbringing.

They're urging jurors to give him life in prison instead of death.

Monday, they described a childhood of abuse, instability and abandonment. They say Smith's father has never been in his life, and his mother had a series of violent, turbulent relationships with men who came in and out of Smith's life.

His step-father admitted in testimony 10TV was not permitted to record that he was an alcoholic and crack addict who hadn't been there for much of Smith's life.

Smith's attorneys say he has several mental health diagnoses and was once committed for suicidal thoughts.

"His mother was prone to vicious verbal outbursts, emotional abuse," said Mitigation Specialist James Crates. "She would call him names, she would tell him he was worthless, tell him he was going to end up just like his father, that she wished he'd die. Those were not at all uncommon outbursts."

Jurors are expected to begin deliberation on Smith's sentence Wednesday.