NWS: 3 tornadoes in Ross County, 1 in Pickaway County among at least 6 in Ohio Saturday

The National Weather Service said one of the Ross County storms was rated as an EF2 while the other two were rated EF0. Pickaway County saw an EF1 tornado. 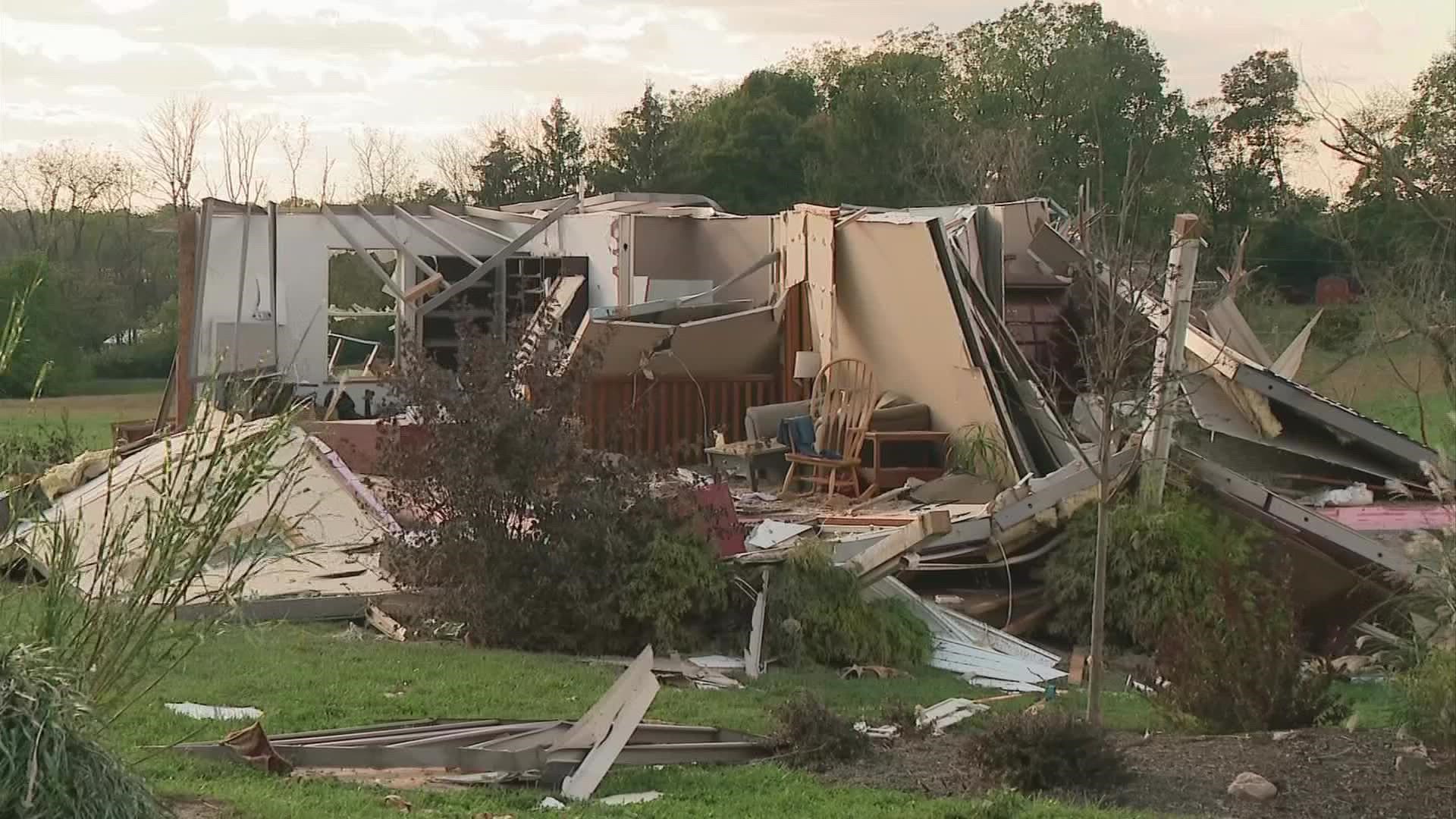 COLUMBUS, Ohio — The National Weather Service in Wilmington, Ohio confirmed that at least six tornadoes touched down in Ohio Saturday morning, including three in Ross County.

The strongest storm was an EF2 tornado just southeast of South Salem in Ross County that touched down at 1:28 a.m. and covered less than a mile in three minutes. The storm had an estimated maximum wind speed of 115 MPH and a maximum width of 100 yards.

The EF2 tornado damaged trees in Sunset Park and two buildings were destroyed on Stewart Street. One of the buildings was lifted off its foundation and the other's walls collapsed. Power poles were also snapped on the same road.

The storm continued to cause tree damage before lifting as it was moving along Lower Twin Road.

The NWS said a brief EF0 tornado was confirmed west of South Salem with winds up to 85 MPH. The tornado lasted about one minute at 1:25 a.m. according to the NWS and its maximum width was 20 yards.

Officials found outbuildings and a large shipping container blown from their positions. A roof was blown off one home and large trees were knocked down. A child also sustained minor injuries from flying glass.

A second EF0 tornado, this one in northern Ross County near Frankfort, was confirmed by the NWS. The storm also had an estimated maximum wind speed of 85 MPH. The storm started around 1:42 a.m. and ended at 1:48 a.m., covering 3.4 miles and had a maximum width of 75 yards.

The storm knocked down several trees and a roof off a home. A back porch was also destroyed. The tornado touched down near Vollmar Road and ended near Cattail Road.

Surveyors also found tornado damage in southern Pickaway County, just north of the Ross County border near Kingston. The NWS said an EF1 tornado with an estimated maximum wind speed of 110 MPH touched down around 2 a.m.  The storm stayed on the ground for 2.7 miles and had a maximum width of 80 yards.

The tornado in Pickaway County took a roof off a two-story home and threw it 400 yards. Trees were also damaged in the storm's path.

In Highland County, there were two areas where surveyors saw tornado damage. One was approximately northeast of Hillsboro and the other was southwest of Hillsboro.

The NWS said the tornado to hit southwest of Hillsboro was also an EF0 storm and had maximum winds of 80 MPH. It was up to 50 yards wide and was on the ground for six minutes, traveling almost two miles just before 1 a.m.

The tornado that touched down northeast of Hillsboro was an EF1 with maximum winds estimated at 95 MPH just after 1 a.m.  The storm traveled about three miles and was up to 70 yards wide. More homes and trees were damaged.

Damage to trees seen in the Tarlton area, a village in Fairfield and Pickaway Counties, was done by straight-line winds with speeds of up to 70 MPH, according to the NWS.

The NWS says a single long-track supercell thunderstorm produced several tornadoes on a path from southern Indiana through western Pennsylvania over the course of almost nine hours late Friday into early Saturday.