The charges stem from a series of signatures submitted to the Fairfield County Board of Elections. 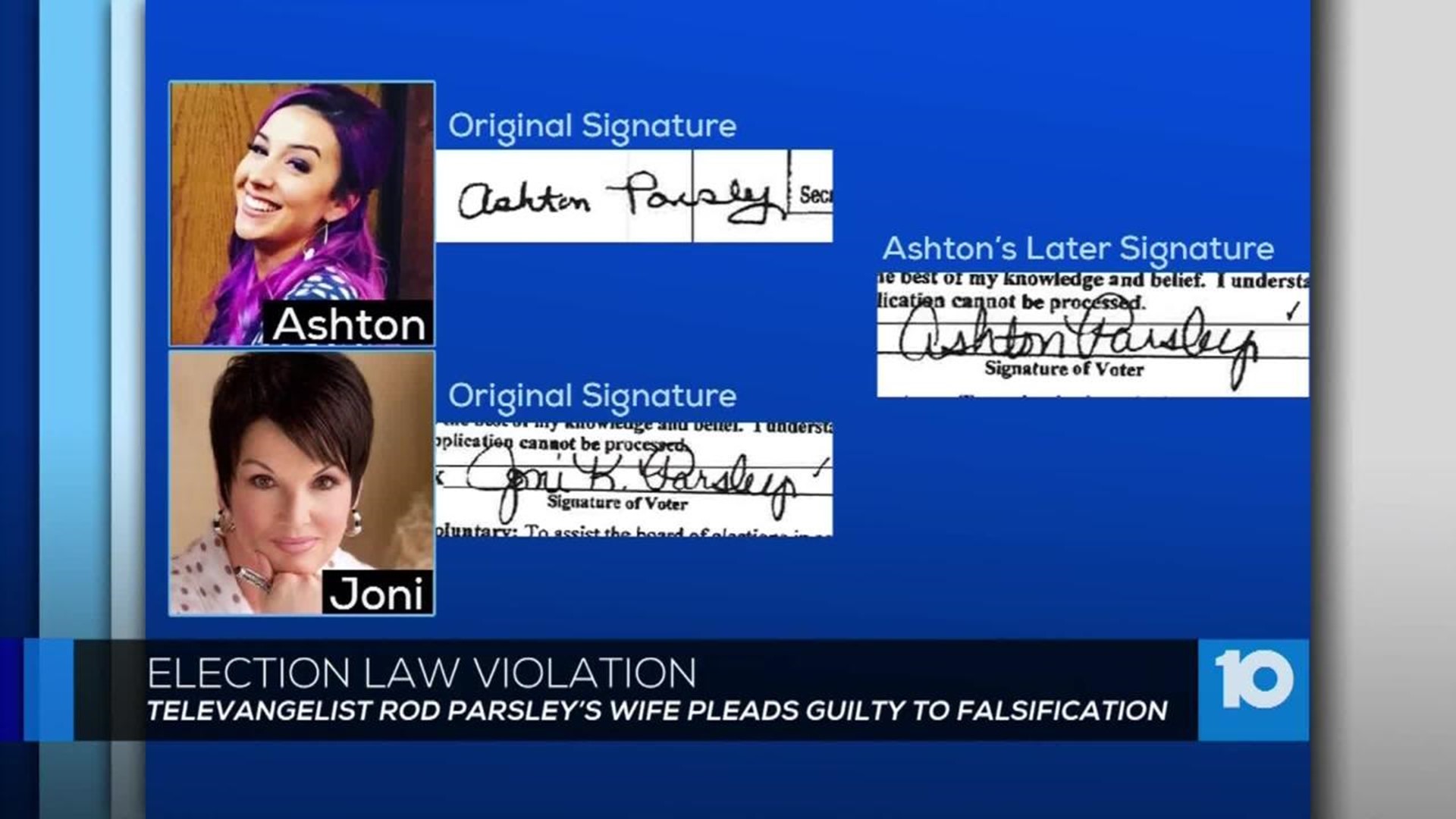 Pastor Rod Parsley and his wife Joni lead a flock of thousands, at World Harvest megachurch in Canal Winchester, on television, and online.

They offer spiritual and moral guidance, and parenting advice, using their own family as an example.

But last week Joni Parsley was far from the pulpit, appearing in a Fairfield County courtroom to face allegations of violating election law.

The charges stem from a series of signatures submitted to the Fairfield County Board of Elections.

The signatures are on the bottom of requests for absentee ballots for Joni Parsley and her adult daughter, Ashton.

Board of Elections employees raised concerns in November 2013, that "it appeared the same person had completed both forms."

"If there is a false signature, if the voter did not sign their own application, that's enough to do it,” Susan Bloom, Director of the Fairfield County Board of Elections, said.

Asked whether that constitutes a crime, she answered, “Yes.”

Bloom said signatures are a key tool her office uses to protect against voting fraud.

Side by side, she said, Ashton Parsley's signature on the ballot requests didn't look to be her own handwriting, but her mother's.

And a look into the Parsleys' voting history turned up even more concerns: questionable signatures in six different elections between 2009 and 2014.

Board of Elections investigators wrote, "it appeared that this was a consistent pattern for these two voters."

Bloom submitted the evidence to her board members, who voted unanimously to forward to the Fairfield County Prosecutor.

That was in November 2013. And that's where the case sat, until Friday, when Joni Parsley was charged with attempted election falsification, pleaded guilty, and was sentenced.

“Obviously, I'm very sorry,” Parsley told a judge. “I had no idea that...it's my own negligence and ignorance not reading the fine print of the ballot. And I certainly apologize for that."

So why would this case take nearly two and a half years to prosecute?

Lora Manon, the prosecutor on the case, blames turnover in the Fairfield County Prosecutor's Office.

The first two prosecutors on the case both left, handing the case off to Manon early this year.

She said Parsley's prominence played no role in when, or how, this case was handled.

Bloom said the integrity of the vote is something her office takes seriously.

"We want elections to be conducted fairly. That's our job," Bloom said.

Fairfield County Municipal Court Judge James Fields sentenced Parsley to 10 days in jail but suspended that time. He ordered her to pay a $250 fine and serve a year of probation.

Parsley's spokesperson said Parsley was not available to speak with 10tv, but issued the following statement:

“Best intentions can at times become misplaced. Joni completed and signed her daughter’s absentee ballot on her behalf simply for the sake of convenience while her daughter was out of town. While Joni did not intend to violate the statute, she understands the consequences her actions hold. Therefore, throughout this process, she has fully cooperated with the election board and prosecutor’s office and will continue to do so in light of the results. Joni’s commitment to serving the Central Ohio community remains steadfast.”

Last year, 10TV reported on accusations of mismanagement and turmoil at the Fairfield County Prosecutor's Office.