He's the same senator who criticized Austin's mayor for taking a vacation to Mexico in the middle of the coronavirus pandemic. 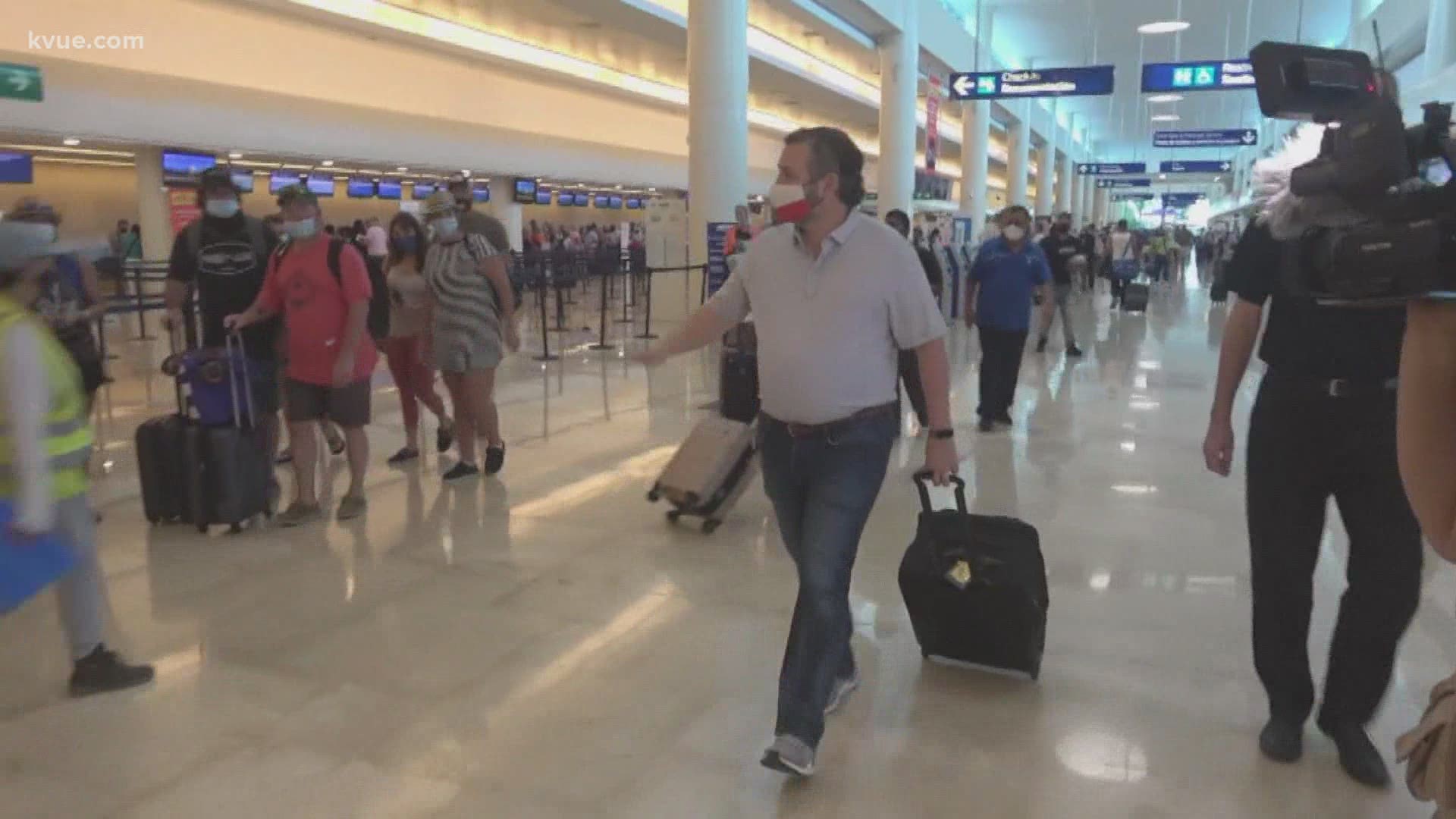 AUSTIN, Texas — Amid massive power outages and a historic winter storm, photos of Sen. Ted Cruz are circulating on social media of the senator reportedly boarding a flight from Houston to Cancun, Mexico. He's the same senator who criticized Austin's mayor for taking a vacation to Mexico in the middle of the coronavirus pandemic.

Cruz was reportedly seen in the Houston airport holding a couple of bags, and behind him was United signage, showing a local time of 4 p.m., photos on Twitter show.

Guess which US Senator from Texas flew to Cancun while the state was freezing to death and having to boil water? pic.twitter.com/fNY00EmMMR

He reportedly took off several days into a series of winter storms that have left millions of Texans without power and many cities under water restrictions.

Back in November, Austin Mayor Steve Adler made national news when he confirmed to KVUE and Austin American-Statesman reporter Tony Plohetski that he hosted his daughter's outdoor wedding in Austin before taking a vacation to Mexico to celebrate. Adler recorded a video from his resort in Mexico, urging Austinites to stay home amid the coronavirus pandemic.

Adler told residents, "Now is not the time to relax."

He later apologized for the trip.

After KVUE's report about Adler's trip, Cruz joined other politicians in criticizing the mayor.

"Hypocrites. Complete and utter hypocrites," Cruz tweeted on Dec. 2. "And don't forget @MayorAdler who took a private jet with eight people to Cabo and WHILE IN CABO recorded a video telling Austinites to "stay home if you can...this is not the time to relax."

Cruz responded to The Hill's report, saying, "I got no defense. A blizzard strikes Texas & our state shuts down. Not good. Stay safe!"

"With school cancelled for the week, our girls asked to take a trip with friends. Wanting to be a good dad, I flew down with them last night and am flying back this afternoon," Cruz's statement read, in part.

#BREAKING: Ted Cruz has issued a statement confirming his flight to Cancun.

"With school cancelled for the week, our girls asked to take a trip with friends. Wanting to be a good dad, I flew down with them last night and am flying back this afternoon."

“I have to admit, I started having second thoughts almost the moment I sat down on the plane because, on one hand, all of us who are parents have a responsibility to take care of our kids, take care of our family. That’s something Texans have been doing across the state," Cruz told KHOU 11. "But I also have a responsibility I take very seriously and that’s fighting for the state of Texas and frankly, leaving when so many Texans were hurting didn’t’ feel right, so I changed my return flight and returned back."

Toilet Tips: How to use your toilet without running water