OSHP: Protest outside Statehouse was 'peaceful'

As of around noon on Sunday, about 50 protesters were at the Statehouse. Some of them were armed. They left a few hours later. 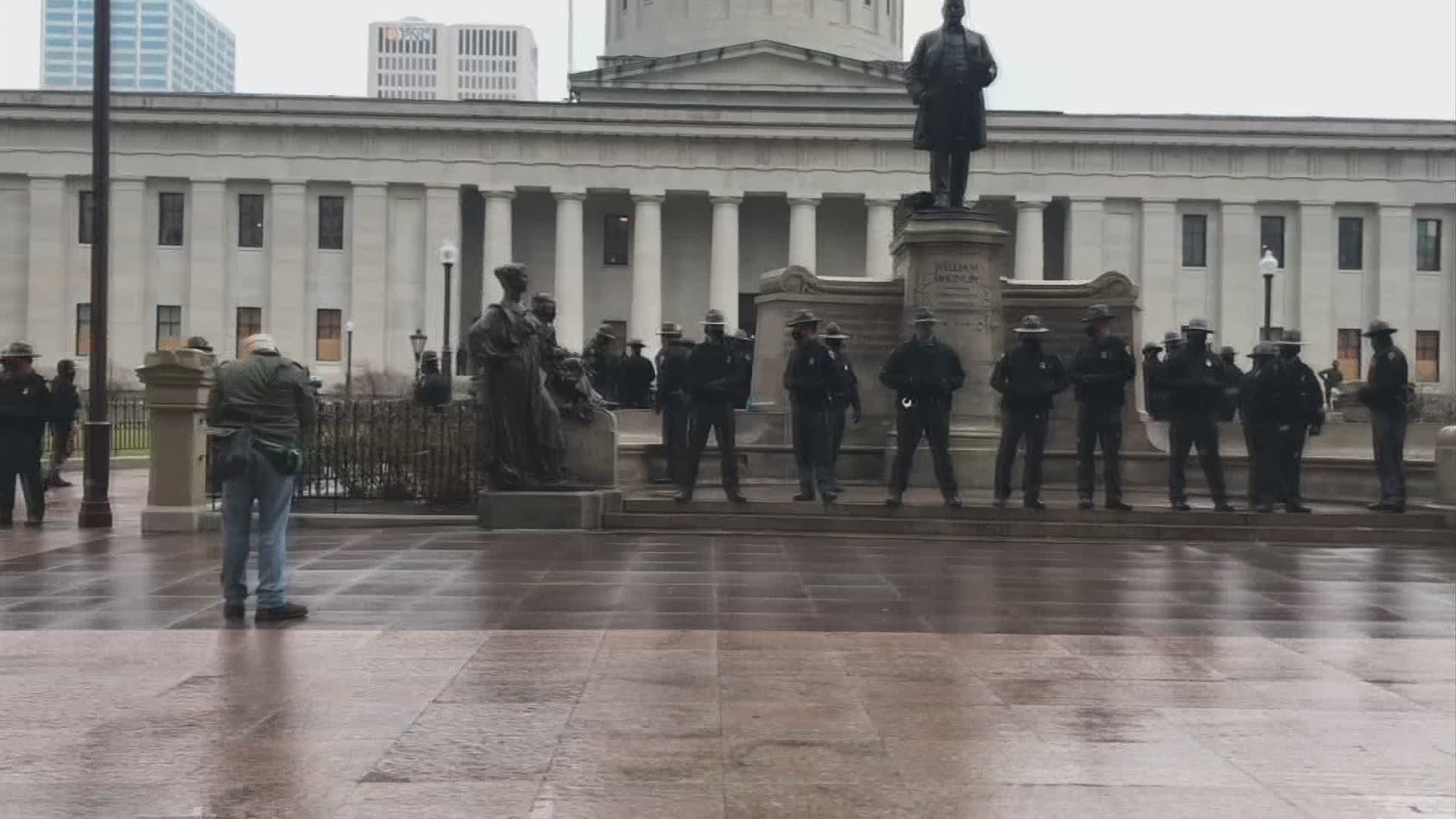 COLUMBUS, Ohio — State and city leaders in Ohio anticipated armed protests for this weekend and the days ahead leading up to the inauguration of President-elect Joe Biden on Wednesday

As of around noon on Sunday, about 50 protesters were at the Statehouse. Some of them were armed.

They left a few hours later.

Kathy Sherman, who was wearing a visor with “Trump” printed on it, told the Associated Press she supports the president but distanced herself from the mob that breached the U.S. Capitol.

"I’m here to support the right to voice a political view or opinion without fear of censorship, harassment or the threat of losing my job or being physically assaulted,” she said.

Some people who gathered at the Statehouse told 10TV they did not support President Donald Trump.  A Black Lives Matter flag was seen in the crowd as well.

“Today people came, they voiced their opinions, I heard people from different groups with different opinions, and again that’s not an issue. You know that’s what the Statehouse is there for, for people to be heard,” Ohio State Highway Patrol Staff Lieutenant Craig Cvetan said.

Cvetan called the protest "peaceful" and said no one was arrested.

Cvetan said that was made possible because plans were in place, including having state troopers, National Guard members and Columbus police officers on alert.

“It’s how you go about that and doing that peacefully and being respectful to others -- saying what you have to say and not resorting to anything violence wise or damaging property, things like that,” Cvetan said.

Ohio Gov. Mike DeWine, a Republican, said he was pleased with the outcome but stressed that authorities "continue to have concerns for potential violence in the coming days, which is why I intend to maintain security levels at the Statehouse as we approach the presidential inauguration.”

While not being sure of what was to come, the crowd was a bit smaller than what most people and business owners expected.

As for the upcoming days, they plan to stick to the initial measures.

“You can expect to see a lot of what you saw today, an increase in the presence of law enforcement," Cvetan said.

COTA rerouted its downtown bus lines because of the protest but buses are now back on their normal routes.

1 / 12
AP
An armed protestor stands in front of Ohio state troopers outside the Ohio Statehouse Sunday, Jan. 17, 2021, in Columbus, Ohio. Security was stepped up at statehouses across the U.S. after FBI warnings of potential armed protests at all 50 state capitols and in Washington, D.C. (AP Photo/Jay LaPrete)