Many more arrests as law enforcement took a zero tolerance stance on violators of the city's 9 p.m. curfew. 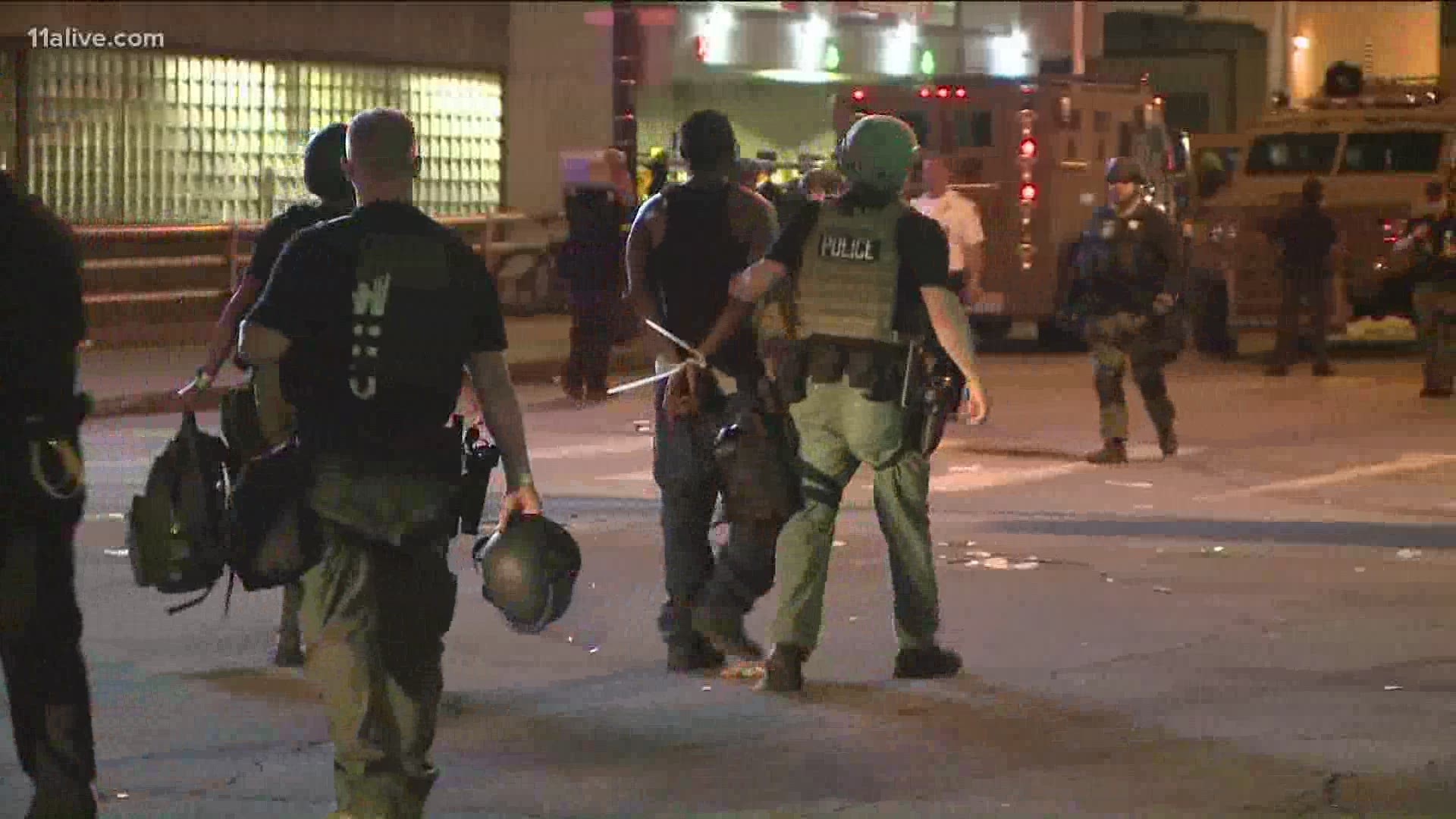 ATLANTA — The second night of protests in Atlanta looked a lot different than the first.

Atlanta Mayor Keisha Lance Bottoms put a 9 p.m. to dawn curfew into effect within the city limits, with the intent of heading off the violent protests of Friday night. Bottoms promised a zero-tolerance stance on violators.

After the sun went down Saturday and into the early morning hours, officers arrested dozens of people.

While Saturday night was a more peaceful night, there were many more arrests made.

Sunday afternoon, Atlanta city officials reported that 157 people were booked into the Atlanta City Detention Center during the overnight hours for violation of the city's curfew.

There is no bond for that particular charge, according to spokesperson Jamille Bradfield, and persons booked on that charge are required to see a judge. They were scheduled for arraignment on Sunday.

According to Atlanta Police, there was damage reported to at least 20 police cruisers. Some arrested were armed with handguns, police said.

As we know, many of the initial protests were peaceful, however, according to Police Chief Erika Shields, some of the individuals showed up with the clear intent to destroy, loot and vandalize.

Atlanta joined more than a dozen other major cities across the nation in enacting curfews in an attempt to head off violent protests and major confrontations with police.

The demonstrations across the nation were sparked by growing anger over the death of George Floyd, who was died while in police custody in Minneapolis less than a week ago.

On video first shown on social media, Floyd could be seen on the ground, with a Minneapolis police officer's knee on his neck. Floyd was heard saying, "I can't breathe," as he lay on the ground.

RELATED: More National Guard members to be called up after 4th night of Minneapolis unrest

Police spokespersons say that on Saturday night, vandals continued to throw rocks at officers and their vehicles.

Also, there was some concern from law enforcement that some in the crowd were armed, and they did not want to see the situation escalate.

Throughout the nighttime hours, Georgia State Patrol officers and National Guardsmen were standing watch in the Centennial Olympic Park area, while some people were out to defy the curfew.

After initially sending 1,500 Georgia National Guard troops in, Gov. Brian Kemp later said that he is deploying up to 3,000 national guardsmen all over the state.

More protests are expected on Sunday, including additional protests in Atlanta.

Editor's note: This story was updated to correct the number of arrests after clarification from police.