'We need to talk with you about your car's extended warranty'

Robocalls: They are super-annoying, super-cheap, and it's truly super-difficult to stop the robocallers. 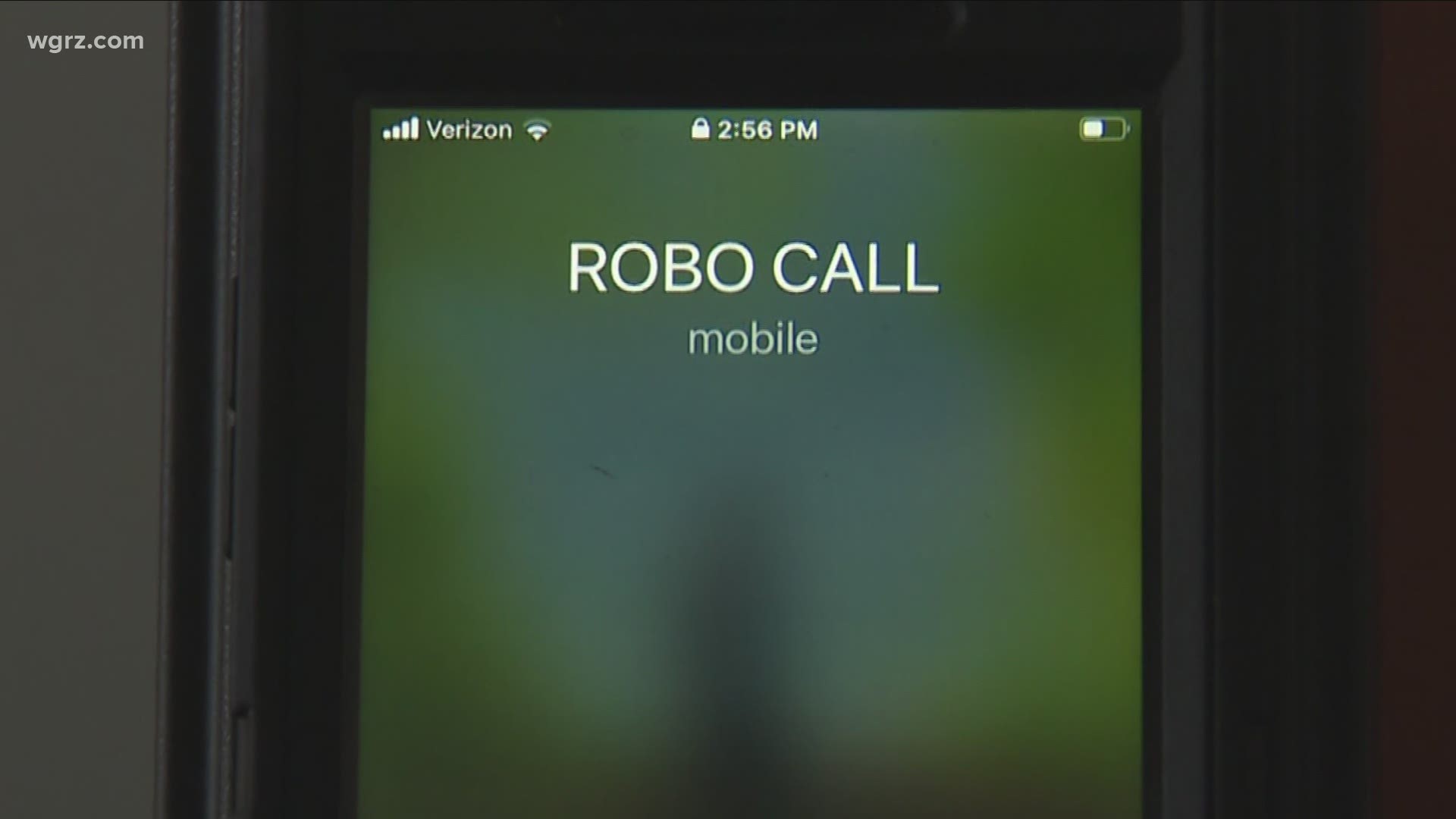 BUFFALO, N.Y. — So, how many phones have you gotten asking about your car's warranty?

It is just one of the many on-going robocall scams that are raining down on phones, and the estimated numbers on robocalls to local phones is staggering.

WHEN IS A ROBOCALL ILLEGAL?

Some recorded message calls are useful. Some examples include schools, doctor’s offices and pharmacies. But these are calls consumers have to sign up for to get.

That’s where the legal line is drawn. The Federal Trade Commission says any recorded call that received that offering something for sale is illegal.

Violating the law can get very expensive.

The U.S. Justice Department, along with the states of California, Illinois, North Carolina and Ohio, took satellite television provider Dish Network to court over illegal robocalls.

The plaintiffs won and Dish, was forced to cough up a total of $280 million.

But catching robocall operations is no easy task.

Policing illegal robocallers are a variety of agencies. The Federal Trade Commission has oversight as a consumer protection entity. The Federal Communication Commission oversees voice communication. Both refer cases to the U.S. Department of Justice, and state attorneys general have also brought lawsuits.

But the legal reach these agencies have ends at the border, and that’s part of the problem.

“Many robocall operations originate overseas,” Will Maxson of the FTC said.

Maxson continued, “When someone is located outside the United States, we don't have as many tools in our arsenal, because we don't have international law enforcement authority.”

So, pursuing robocall operations that begin or are bounced through foreign countries requires cooperation of foreign governments and law enforcement agencies, which can be slow.

Technology has made making robocalls so cheap and easy that casting a net of phone calls over an entire city can be done quickly.

“With a hundred dollars, you can make tens of thousands of calls easily, maybe into the hundreds of thousands,” reformed robocaller Michael Self said.

Today, Self is the CEO of PhoneFusion, a technology communications company. But in the 1990s, Self was a robocall pioneer, writing code for political robocalls.

Self says because it’s possible to make millions of calls on the cheap, operations do not have to be very successful to be profitable.

“If you just get a 0.01% of people that take that message seriously and of those, if just 1% progressed to the next step, so what if you made 3, 4, 5, 6 million calls and you got four or five, six on the line that you take for a couple hundred or a thousand dollars. You've scored pretty big and the phone bill for that hundreds of dollars,” said Self.

So, robocalls are cheap, it’s easy to make millions of them, and it’s difficult to catch illegal operations.

How do you protect yourself?

It’s far from a guarantee, but start with registering your phone number with the National "Do Not Call" Registry at donotcall.gov. This website is also where you can lodge complaints about robocall.

If you get a phone call from a number you do not recognize, hang up. If you do pick up and hear a recording, end the call immediately.

The FTC says the more some engages with a robocall, the more likely that person is to get more robocalls. If you’re talking, punching numbers or engaging in any way, the robocallers will target you.

2 On Your Side would also like to hear about your robocalls. If you’ve recorded a call, or have a story about robocalls you’d like to share, please email us at robocalls@WGRZ.com.

We will take your stories and complaints to federal officials.