The victim was treated for his injuries and released. 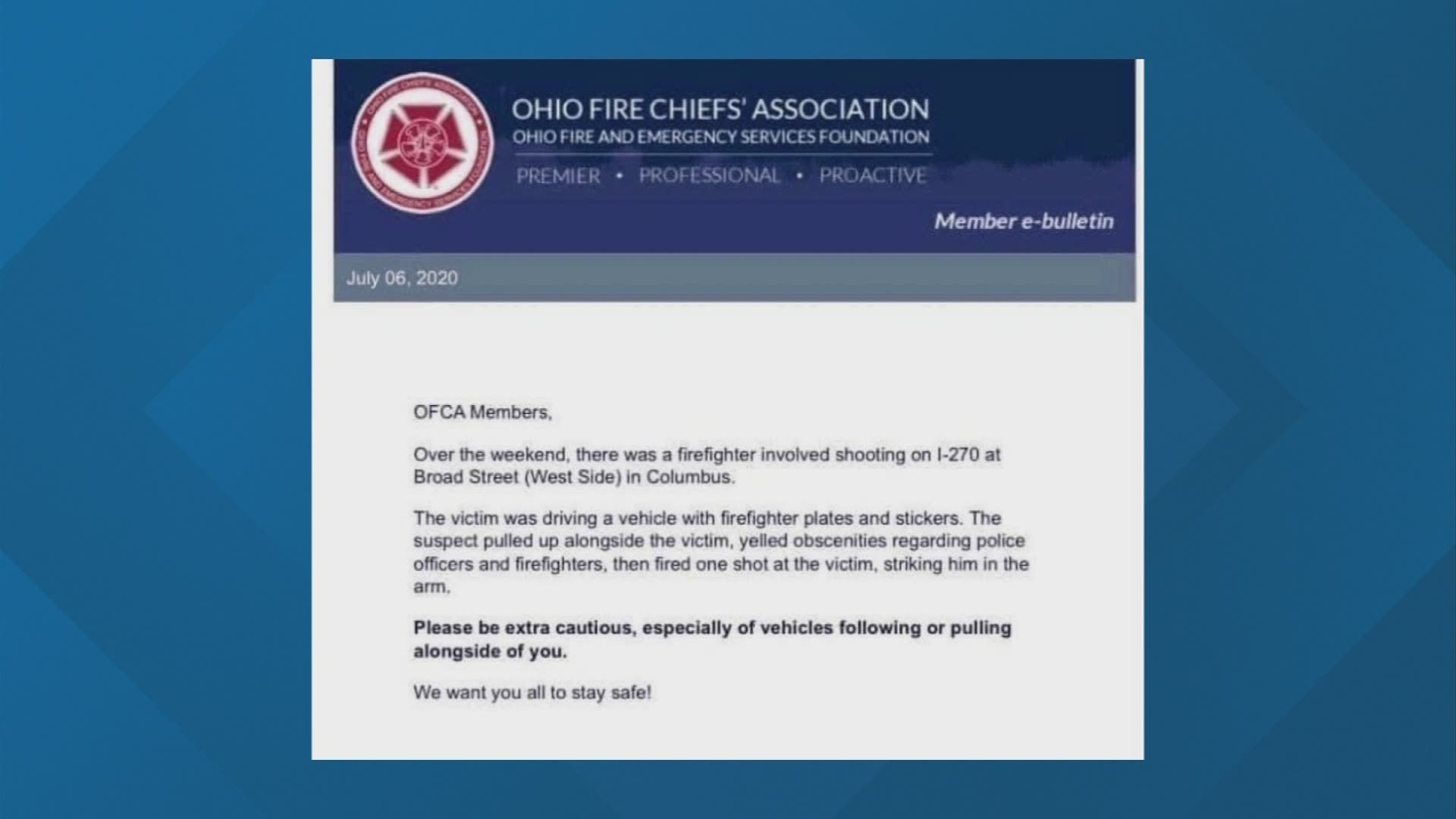 In a message sent to members, the Ohio Fire Chief’s Association says a former firefighter was shot at on Interstate 270 after the person allegedly yelled obscenities regarding first responders.

The association confirmed the statement and said they have nothing more to add at this time.

10TV has obtained the 911 calls made from the victim and a witness.

In the first 911 call made from a witness:

I’m on the interstate, I’m getting off on West Broad Street up by Central Avenue I was on 270 up 270 West there was a guy in a small vehicle with top down and there was a guy somebody in a looks like a Honda SUV shot at him, I don’t know if he hit him or not but he shot at him”

In another 911 call made from the victim himself:

“Hey I’m in a car I’m trying to get off at Wilson Road some guy in the freeway some black guy in a gray four door shot me in the (expletive) arm!”

We reached out to the Franklin County Sheriff’s Office to confirm what happened Sunday night.

The Chief Deputy of Investigations said the incident happened around 7:30 p.m. Sunday night.

He said there are many questions that still need to be answered to piece together exactly what happened.

We are told the victim is a former firefighter and was in his personal car.

The chief deputy said the victim told detectives he was in his convertible getting onto I-270 northbound from Broad Street when he merged over in the center lane. The victim said a dark-colored vehicle was in the same lane and got over from him.

The victim said the vehicle passed him but slowed down, parallel to him, and yelled the comments.

The chief deputy said one to two shots were fired and the victim was grazed in both forearms.

A witness told the Franklin County Sheriff's Office he was driving his truck behind the incident.

When detectives asked if it was a road rage incident, the witness couldn’t verify but mentioned that it may have been a dispute over merging.

Deputies said the witness confirmed seeing shots fired. He tried to follow the SUV but it was driving at too high of a speed.

The sheriff’s office said the description of the suspect’s vehicle isn’t clear. The victim is saying the make is one thing, the witness is saying another.

They do not have anything from ODOT, but the chief deputy said even if they did, it wouldn’t be able to tell them what was said, who the driver was or the tag numbers of the car.

As far as the current condition of the victim, deputies said he was treated at the hospital and released.

The sheriff’s office is asking anyone with information or who may have witnessed anything to come forward.