Reporter Maureen Kocot signing off at 10TV: A look back at the last 24 years

During her time at WBNS, Maureen shined as a journalist, reporting from the anchor desk to the streets of central Ohio. 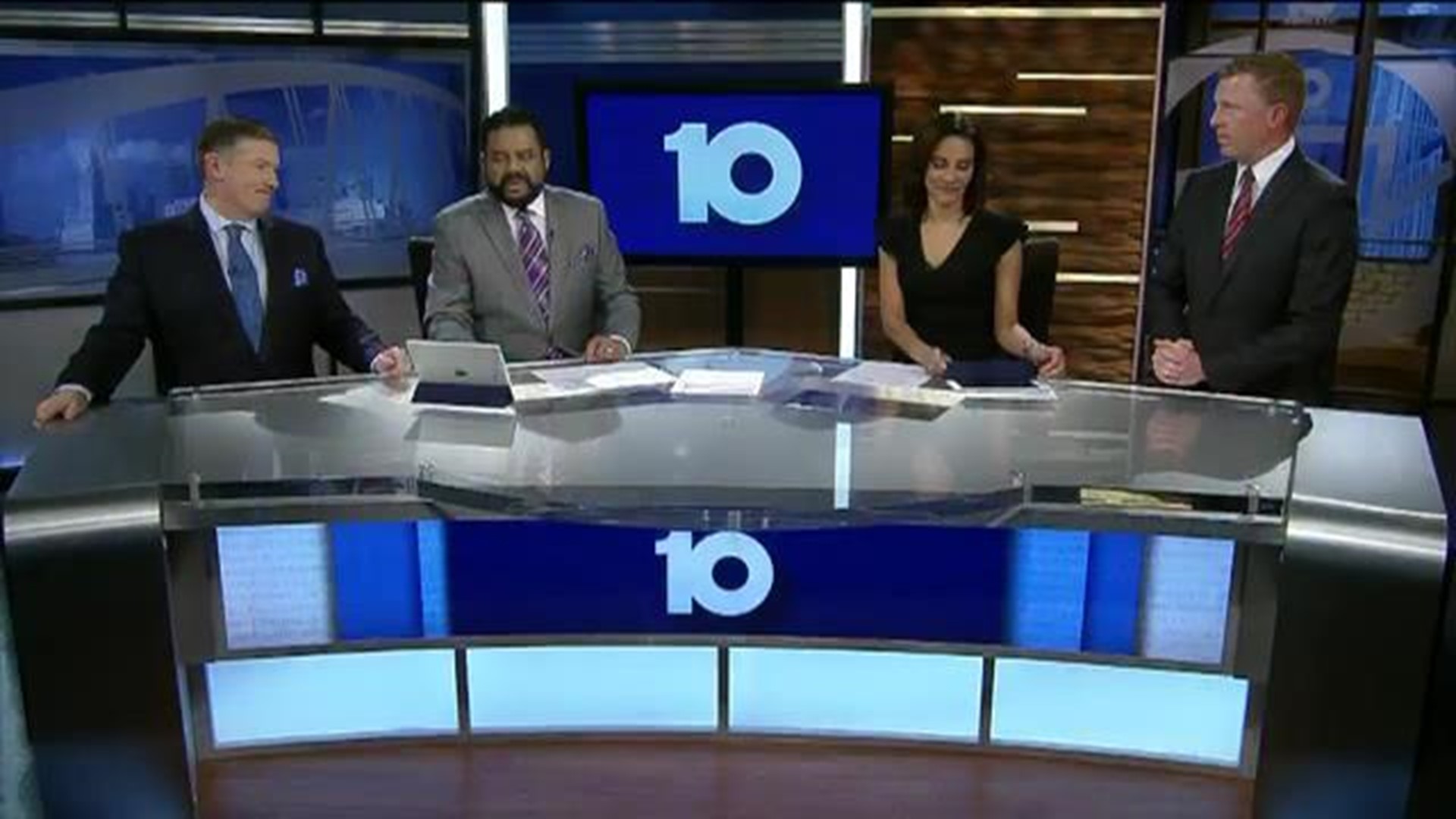 COLUMBUS, Ohio -- After more than two decades, reporter Maureen Kocot is signing off at 10TV.

Maureen, an Emmy and Associated Press award-winning journalist, joined WBNS in 1995. Her career has taken her from the glamour of the red carpet at the Grammy Awards to the tragedy at Ground Zero.

Maureen grew up in Maryville, Ill., a small town not far from St. Louis. She graduated from the University of Illinois in 1992 and worked as an anchor/reporter at WICD-TV in Champaign for three years before relocating to Columbus.

During her time at WBNS, Maureen shined as a journalist, reporting from the anchor desk to the streets of central Ohio. She quickly gained the trust of local law enforcement with stories that had a special emphasis on community policing and prevention.

In 2006, Maureen joined the CrimeTracker 10 unit to highlight crime trends in an effort to keep people safer in the communities. She often broke exclusive stories with the help of agencies such as the Ohio State Highway Patrol, the Bureau of Criminal Investigation and Identification, the Ohio Department of Public Safety, and Ohio Homeland Security, to name a few. Maureen’s extensive network of resources gave her insight into federal agencies that were unparalleled to none.

Most viewers don't have the pleasure of knowing Maureen outside what they see through her reporting on TV. For that, we turn to her friends and colleagues. Here's what the staff at WBNS had to say about the kind, passionate, hardworking, quick-witted person we call, "Mo":

"Words fail me when I think about the TV news biz without Maureen Kocot leading the charge... but I know she’s starting a new chapter in her professional life with the same dedication and charm that made her an amazing colleague and friend. Three cheers for Mo!"

"From the day she came to 10TV, Maureen made a difference. Seasoned, thoughtful and aggressive about newsgathering. Over the years, she’s reported on some of the biggest stories in Central Ohio and beyond. She’s been our breaking news go-to person, sometimes risking her own safety in pursuit of a story. A true professional and dear friend. I will greatly miss her."

“Mo has been making central Ohio safer and smarter through her peerless reporting for 24 years. There’s no sharper or better TV reporter in the market - possibly the state. If you have the privilege of knowing her personally, you know she has a wicked wit. But it’s her decency, compassion, and kindness that are the reason she has the trust and admiration of so many of us - most importantly, our viewers.”

Mo has set the standard for the rest of us. She has given half her life to this station and this community, and we are all better off for it. I am grateful to have worked with, and learned from, her.

There’s no other way to say it: Mo is THE BOSS. Everyone who’s worked with or watched her over the years knows that.”

"One of my fondest memories of Maureen is how diligently she worked on the Highway Shooter story. This story was a grind on so many levels. One day we’re covering the daily news of the day, the suddenly we learn there was another shot fired and whole the day changed in a snap. Maureen’s deep contact with law enforcement allowed us to stay ahead of the story the entire time all the way up to the arrest.

On a personal note, Maureen always was there to help reporters with cellphone numbers of cops, firefighters, prosecutors, whoever was in the know about the story you were working on. She was the consummate team-player in the newsroom. Her knowledge of the city and the people who are in the know will be greatly missed.

I miss her pen cap eating and impromptu singing in the newsroom—not really. Kocot you are one of the best."

"Maureen is not just a great reporter she also has a wicked sense of humor. We will miss those witty observations and her perfect timing at dropping those ‘gems’ in the office."

"The first time I met Mo was when I came to interview at 10TV. I didn’t know a face in the building, but her presence in the morning meeting was one you couldn’t miss or forget. She was witty and eager to get out to pursue her story. She continued to impress me with her work and was always good for a laugh. Her presence will be missed dearly, but I know every pen cap in the newsroom is rejoicing today that they will not have to worry about getting chewed up at her desk! Haha. I wish her nothing but the best."

"Mo is the consummate professional and one of the hardest working people I have ever known. Mo cares, and she believes in the truth. It has been an honor to work alongside her. I will miss her passion and her incredible sense of humor. Mo is one in a million."

“I first met Mo out pounding the pavement for another news station in town following breaking news. We’d end up at the same scene and she would handle it like a boss. I thought, ‘Dang, she’s good.’ She’d usually scoop the competition.

Honestly, I can’t picture 10TV without Maureen Kocot. I’m happy for her though. No more working holidays, double shifts, overnights, weekends, on call, crime scenes, flooded streets… at least I hope your next move avoids all that. Love you girl. You will be missed around here."

“Mo was and is my favorite co-field anchor. We’ve covered some big stories together. Her connections to helpful sources and rolodex were seemingly endless - and for that I’m grateful. I’ll miss her infectious laugh in the newsroom.”

"As a news anchor, I love reading Mo’s stories. She’s a gifted writer and storyteller. Nobody has deeper sources in law enforcement than Mo. No one. And on top of all her talents, she’s got a wicked sense of humor and she’s the type of person you WANT to have a beer with."

"Maureen is a true journalist. I’ve worked with her for 12 years and remember the days when you would slug “Mo will find news” as a lead story. She came through 100% of the time. And that stands true today. From breaking news, to Crimetracker 10, to the morning Alert Desk and back again. She covers a “man in a hole” as passionately as she does her investigative stories. Personally & professionally she cannot be replaced. We love you MoMo!"

"I met Mo when I was an intern at 10TV and I was instantly wow’d! Maureen sets the bar extremely high when it comes to reporting and journalism. But she also has the world’s biggest heart, always there when you need her. I’ll miss Mo’s bold personality around the newsroom, it just won’t be the same. Mo, my closet will forever be open to your girls!"

"She is a great example of what we should all strive to be as journalists. She is talented, intelligent and a lot of fun. She is the go-to person in the newsroom. She has taken the time to help to make sure I succeed here at WBNS, and for that, I will forever be grateful."

"Maureen Kocot was the first person I shadowed on the job at 10TV and I remember feeling overwhelmed by everything I learned following her during that single breaking news story alone.

Although it’s true that our newsroom is losing a key player and personality, in my opinion, it’s our central Ohio viewers and those who live and work here who have been most impacted by ‘Mo’ and her work.

Maureen’s stories led to countless positive changes in so many central Ohio communities and while I know she will remain unmatched, I think I can speak for myself and the rest of our 10TV newsroom in saying that Maureen has inspired all of us to push ourselves to be better journalists. Thank you for that, Maureen. You will be missed!"

"One of my favorite memories of Maureen: We were in Lexington Kentucky for a storytelling workshop. We had just seen great stories from our instructors showing characters and how to develop characters. So we knew we had to come up with something outstanding to keep up with the rest of the top storytellers in the room with us. We contemplated the "Big Ass Fan" company, their actual name, but thought some other students would pick the easy story just around the corner too, we needed better. There was the symposium in town with the son of Larry Flynt from Penthouse fame and sure to be protestors, but still other teams were contemplating that as well. So Maureen looked and called and finally came across an advertisement that seemed to fit the bill. We were in the heart of thoroughbred horse country, wouldn't it be fun to do a story on a guy that raises donkeys! We could see the surprise building, huge beautiful barns, lush pastures, stallions grazing in the sun, then an EE-AW from a donkey! This was it! The only bad thing his farm was 150 miles away and even though this was a class we still had a deadline and traveling that far would stretch us tight. But we had to get this character! So we hustled off and the story was everything we thought and more. The guy who raises the jack-asses was blind. Surprise #2 to be woven into our story! So on a day where we could have went around the corner and did the easy thing and would have been able to relax and enjoy dinner on the company, Maureen searched, found, wrote and ate Cheetos instead of steak and stayed with me as I edited our great donkey story right up until the last minutes we had to turn the story in.

That's the type of reporter Maureen was to work with, a hard worker that makes you want to work just as hard to do the best teamwork possible."

"My “Wife” is leaving me. After 24 years together, she is moving on. No more sunrise drives in the morning or sunset days together...no more laughing historically or tears shed...secrets told and secrets kept after all these years.

It will be a big adjustment not seeing her. Her sense of humor, tell it like it is attitude, honest and true personality that shines in every situation possible. When she sees old friends or meets new ones, they all know she is a caring soul and a genuine good person. Like any couple, we had our good times and bad...ups and downs...good words and bad words but in the end, we always accomplished what we set out to do together and did it as a team...a true partnership!

By now you know my “Work Wife” of 24 years is leaving for a brighter beginning and I can’t be more proud of her! From SWAT raids, Bounty Hunter school, Ohio River flooding, Winning my only EMMY Award in a blizzard and the mundane daily turn stories on the local news to helping me write My Dad’ eulogy and driving 3 hours to the funeral home for me and many, many more times together off the clock. I can’t thank her enough for being a friend and fellow journalist. I’m gonna miss me some MoMo."

"Across central Ohio many people watching the news know Mo charges after stories to break details first but inside the newsroom, we also see her witty sense of humor and her big heart. I am going to miss seeing my dear friend each day but am excited for her new opportunities!"