For the first time since the death of 10TV Chief Meteorologist Chris Bradley, his family sits down to share their thoughts. 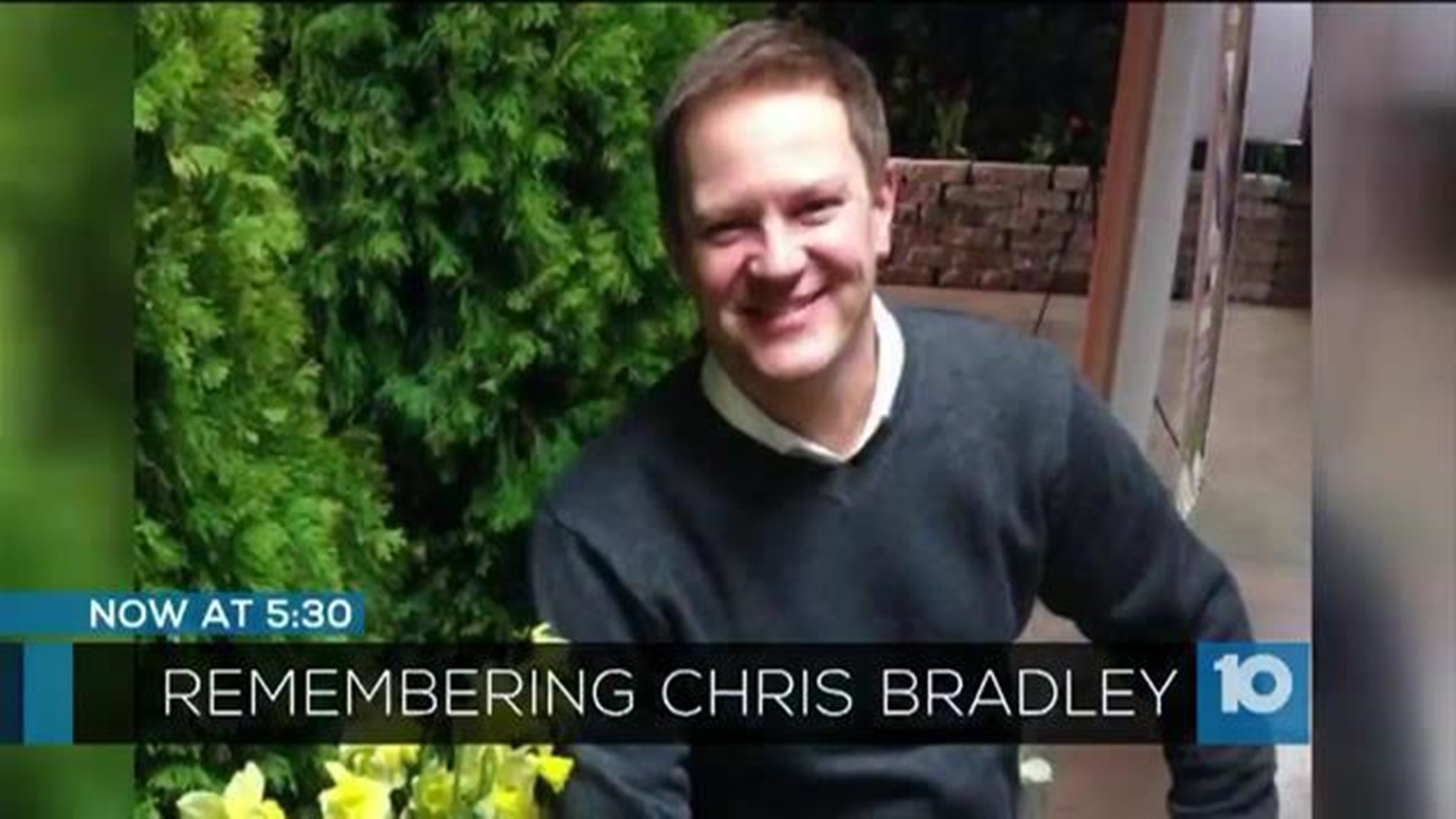 It has been nearly eight months since we said goodbye to a beloved member of the 10TV family, and the central Ohio community.

Chris Bradley passed away on December 5. His loss is still felt at 10TV, and by so many viewers who stop us to talk about him.

But no one was more deeply impacted than Chris's husband Jason and their two children.

For the first time since his passing, they are sitting down to share their thoughts on Chris, his life, and their loss.

The garden at his Worthington home is where Chris Bradley found peace.

"His garden was really his solace," said his husband Jason Bradley-Krauss.

He spent his final days in the family sunroom, his blooms never far from view.

"It was not uncommon to walk in the room and find him with a great big smile on his face, just looking out the windows. And most days he had enough strength to step outside and he loved being in his garden. But most of all he loved the dahlias we planted. So it's really special when I see those blooms."

It was in this room, that his family said goodbye to Chris.

"And his passing was beautiful. We gathered around him here. the hospital bed was in this spot. and the kids were with me," said Jason. "And we sang hymns and prayed, and said good-bye, one by one, and just held him. And he left in a very peaceful manner."

"I never knew someone who was more courageous in the face of pending death," Jason said. "Chris knew he was going home. And while saying goodbye was really hard, there was a certain amount of peace, in knowing he has defeated leukemia and he is home."

That night, at 6 o'clock, 10TV broke the news to Chris's central Ohio family.

And like everyone else, the Bradley-Krausses gathered around the television to remember.

"To see Chris alive, and healthy, and at the weather desk, doing what he loves, to see his smile, and his dimples, really was pretty amazing. And we just watched that as a family. We watched all of it. And it was of such comfort."

Before he would reach his rest, Chris and Jason, and their children Spencer and Maria endured a grueling battle.

Fighting for his life for nearly two years. And doing it in the public eye.

"Everyone would come to you and ask you like, how are you, how is your family, how are you guys dealing with it? Do you guys need anything?" said Chris' 12-year-old daughter Maria. "And it was just like, you kind of wanted to be alone for a little bit and just get some space from everyone, for just like a little bit of time."

"It was comforting when people would come up to you, but at some point you just wanted to have your space," said Chris' 15-year-old son Spencer. "And you didn't want people to come up to you. So it was good and bad at the same time."

Prior to the March 2017 diagnosis that upended their lives, having Chris Bradley for a dad could be pretty cool.

Glenn McEntyre: "What was it like for you guys, as kids, to share your dad with everybody? What was that experience like?"
Spencer Bradley Krauss: "I was you know, proud. Because to everyone who came up to him, they'd be like, 'Oh my gosh it's Chris Bradley!' And he would be like...it would make them happy. And knowing that my dad could make other people happy was a good feeling."

But to be the man Chris Bradley loved, was something else altogether.

"A friend of mine sent a photograph a few days ago of a dinner party that we were in attendance at in 1995," said Jason. "And I looked at that photo and thought, what do those kids think? Boy, they have a lot in front of them. I broke down into tears when I saw that photo. And I was recalling then the last photo that I had taken with him. It was on our way to the James where we really came to understand that it would be his last blood transfusion. A friend of mine said, 'Take a look at that picture of you guys back in 1995. Chris loved you for the rest of his life.'"

This Spring, Jason and Maria filled their garden with the dahlias Chris loved so much. Jason says it's here he feels closest to Chris.

"It's now a real sense of comfort to come out here," he said.

And that's not by accident. Jason read from Chris' final letter to him, dated November 8, 2018.

"My dearest Jason: a few months ago, I had the idea to write you a love letter. Something I would leave for you to read after I'm gone. You were wearing a blue shirt the first time I saw you. It matched your eyes. And I thought to myself, 'love has blue eyes.' Our life together has been the stuff of a romance novel, and I'm sorry our story has been cut short. I am grateful for the strong, loving relationship we had. I am thankful for the chance to raise two beautiful children together. I ask you to hold me in your heart, and look for me in the detail of every dahlia. Love, Chris."

Jason, Spencer, and Maria say it is important to them to keep Chris' memory, and his community impact, going. To read about their plans to carry his legacy forward, click here.