For years, he and his family rode and raised money in Pelotonia, the annual bike ride that raises money for cancer research. 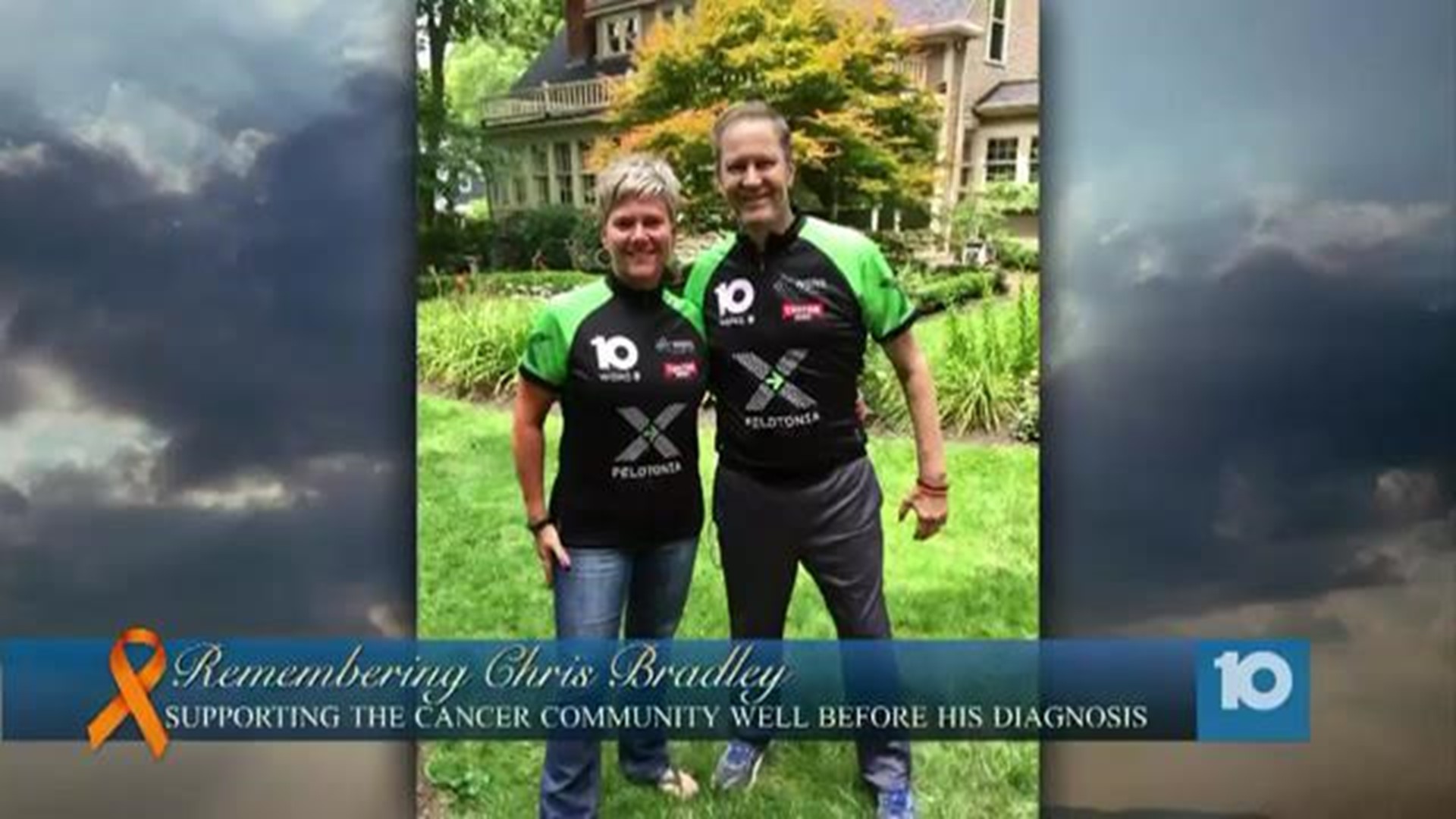 Chris Bradley was active in the fight against cancer long before his diagnosis.

For years, he and his family rode and raised money in Pelotonia, the annual bike ride that raises money for cancer research.

But from the moment of his diagnosis, he became a personal and public champion to many- those who knew him, and those who didn't.

They are the words no one is prepared to hear:

"It just takes your breath away. And so many things just flash through. Not only your own life, but your loved ones, your grandkids, everything," said John Cook of Canal Winchester.

Cook received his diagnosis in February: Acute Myeloid Leukemia, the same disease afflicting a man he only knew from TV.

"I always enjoyed watching him, Chris with his little weather facts, talking about growing up on the farm,” Cook said.

He would meet Chris in person a few weeks later, as both were receiving treatment at OSU's James cancer hospital.

"As I went in for my labs, noticed Chris sitting, recognized him, even with a mask on, sitting over in a chair in the waiting room. Went over and introduced myself, sat down and started talking. He was very inquisitive about wanting to know my journey in getting there."

Over the course of months, John and his wife Donna would come to know Chris and his husband Jason.

"It would be nice to walk in and see his big eyes and his smile. He'd pull his (mask) down and smile,” Donna laughed. “It was uplifting. Chris always wanted to focus on supporting you, and what you were going through, instead of directing things to what he might need."

That same spirit is what prompted Chris and his family to publicly share their walk with cancer.

Doug Ulman is the President and CEO of Pelotonia.

"The cancer journey is so personal, and so difficult. And so for them to be so public, and then to be so honest and genuine and authentic in the way in which they shared it, I think it's remarkable. It says a lot about who he is and who they are as a family,” Ulman said. "We were so inspired by the way Chris was sharing his story that we asked him to come emcee the (Pelotonia) opening ceremony. And for obvious reasons that wasn't in the cards. And he immediately said is there something else I can do? And we asked him to record a short video just expressing his gratitude to the thousands of riders and volunteers and donors who make this possible."

Chris' video was sent to all Pelotonia participants the night before the ride.

"Hi I'm 10tv Chief Meteorologist Chris Bradley. Are you getting excited? We're just a few hours away from Pelotonia. And I really want to thank you for your participation. I'm wearing my jersey from 10tv. Won't be riding. Unfortunately I was diagnosed with acute myeloid leukemia a year and a half ago. And that's kind of sidelined me. But I will be cheering you on for sure."

"I think that video shows a human being dealing with unthinkable challenges,” said Ulman. “Someone who is used to being seen in such a different light on TV, who's now coming across as someone who's authentically struggling with the impact of cancer. And yet there was a hope in it. Yet his personality shined through."

Chris was also there at the Pelotonia finish line in New Albany, cheering and thanking those riding for the cause.

Today John Cook is in remission.

Chris was there to celebrate with him when he got the news.

"Every time we would sit and get results, he would just be so elated that John's was good. And he was having such a rough time,” said Donna Cook. "I'm just heartbroken for his family, for those children and Jason, and for Chris. He's so full of life, you can tell.”

“Everybody's better off knowing him,” said John. "You still pray for him, and hope a miracle is there, but even if it doesn't happen, it's a miracle I met him. He helped me through my journey, so much."

For Chris, his strength, his family, and their openness, these cancer warriors give thanks.

"Just remember what Chris Bradley said- ‘Nobody fights cancer alone.’ We're here for you. I feel he'll always be there for me," said Cook.