Researchers in the Great Smoky Mountains are tracking problem-bears relocated from the park to national forests. The early GPS data shows some bizarre tracks. 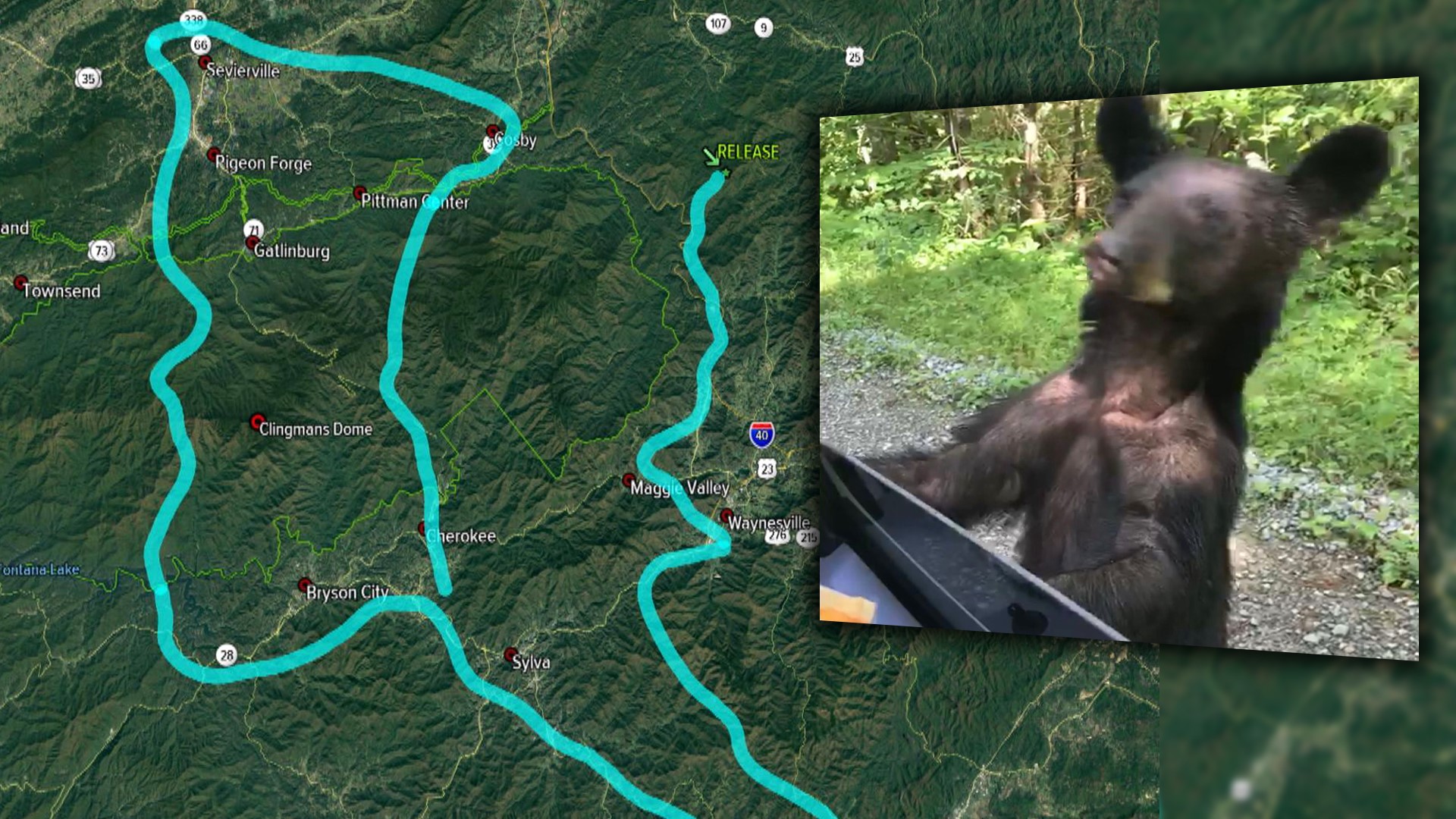 GATLINBURG, Tenn — Wildlife biologists in the Great Smoky Mountains National Park (GSMNP) are getting a head start on a new project that aims to solve a black bear mystery.

The GSMNP has a longstanding agreement that allows it relocate bears that cause problems to the more remote national forests.  They relocate around 10 bears a year and tag the ears of the animals.  But only around one-in-four of the bears are ever seen again.

"Of the bears we move, 74 percent of the bears we cannot account for," said Bill Stiver, GSMNP chief wildlife biologist. "We find around 18 percent killed, either by a car, a hunter, or depredation. Then a small percentage show back up in cities or in the park. The rest, we have some guesses, but really don't know."

In 2021, the park will begin a three-year study that uses GPS collars to precisely track bears relocated to the national forests.  The $450,000 project funds the research in the Smokies as well as Shenandoah National Park.

Stiver has already started collecting data by launching an early pilot study with bears this summer.

"We have a couple of GPS collars available and decided to get an early start. The data we are collecting right now is very preliminary, but what we have already seen from a couple of bears is amazing," said Stiver.

The park moved two bears separately in June from Cades Cove to the northern Cherokee National Forest more than 45 miles away.  Both bears are females that had clearly been fed by park visitors and were conditioned to seek food from people.

"This one bear we have video of walks right up to our vehicle. That's how food-conditioned that animal was. It was coming right up to our vehicle and was so close, it was difficult to get enough space between us to dart it (with a tranquilizer). The only option we have with that kind of bear is to move it to another location, because we cannot leave a bear with that behavior near campgrounds and picnic areas," said Stiver.

Credit: WBIR
A food-conditioned black bear in Cades Cove approaches the window of wildlife biologists who then relocated it to the Cherokee National Forest.

The two female bears were both released in the same location in the Cherokee National Forest.  But the tracks they made when released were very different.

The first bear roamed around the national forest back and forth in the areas of Cocke County and Hot Springs, North Carolina. Then, it headed west and took a fairly direct route back to Cades Cove.

"You can see here where it crossed I-40 near the Foothills Parkway, kept going right through downtown Gatlinburg, and it went right back to where we caught it in Cades Cove. Some bears are able to do that. They have incredible homing instincts," said Stivers.

The second bear started a strange journey that meanders around and across the entire national park.

"This bear took off south from where we released it in the national forest. It followed I-40 and crossed it three times, which is kind of amazing in that gorge.  Then it goes through Maggie Valley and over to Waynesville," said Stiver.

In Waynesville, the bear's GPS collar sent repeated signals from the same area behind Walmart.

Credit: WBIR
A cluster of GPS points shows where a relocated Smokies black bear found a thicket of berries behind the Walmart in Waynesville, North Carolina.

"We thought it was hit by a car behind the Walmart in Waynesville and went to check on it. And as it turned out, this little area was a thicket of blackberries," said Stiver.

The second bear's journey then continued 40 miles deeper into North Carolina to Cashiers before turning north back toward the Smokies.

"It circles around, comes back toward Bryson City over towards the town of Almond. Then it continues north and swims across Fontana Lake. It goes up Forney Ridge, crosses the Appalachian Trail, goes by park headquarters, and goes up along the west side of Pigeon Forge to north of Sevierville," said Stiver.

Once the bear crossed Chapman Highway, it headed east and crossed Highway 66 in Sevierville until it reached Cosby.

Credit: WBIR
The approximate 215-mile route taken by a black bear relocated from the Smokies to the Cherokee National Forest.

The route taken by the second bear is easily more than 215 miles in two months. This is remarkable considering female black bears in the park typically stay within a range of six square miles.

"Is it behaving like this because it was relocated? What happens to relocated bears? Well hopefully this project will help answer that question. When we move a bear, we like to think they live happily ever after. I suspect that is not the case," said Stiver.

While it will take years to track black bears and determine patterns of behavior after relocation, Stiver said they already know what causes bears to be moved in the first place.

"The answer is making sure we secure our food and garbage, not having any attractants, and not allowing bears to become highly food-conditioned," said Stiver.