'The way they came in was wrongful,' Zoe Wilson said. 'Tearing up his memorial, tearing up his pictures, throwing all the stuff out.' 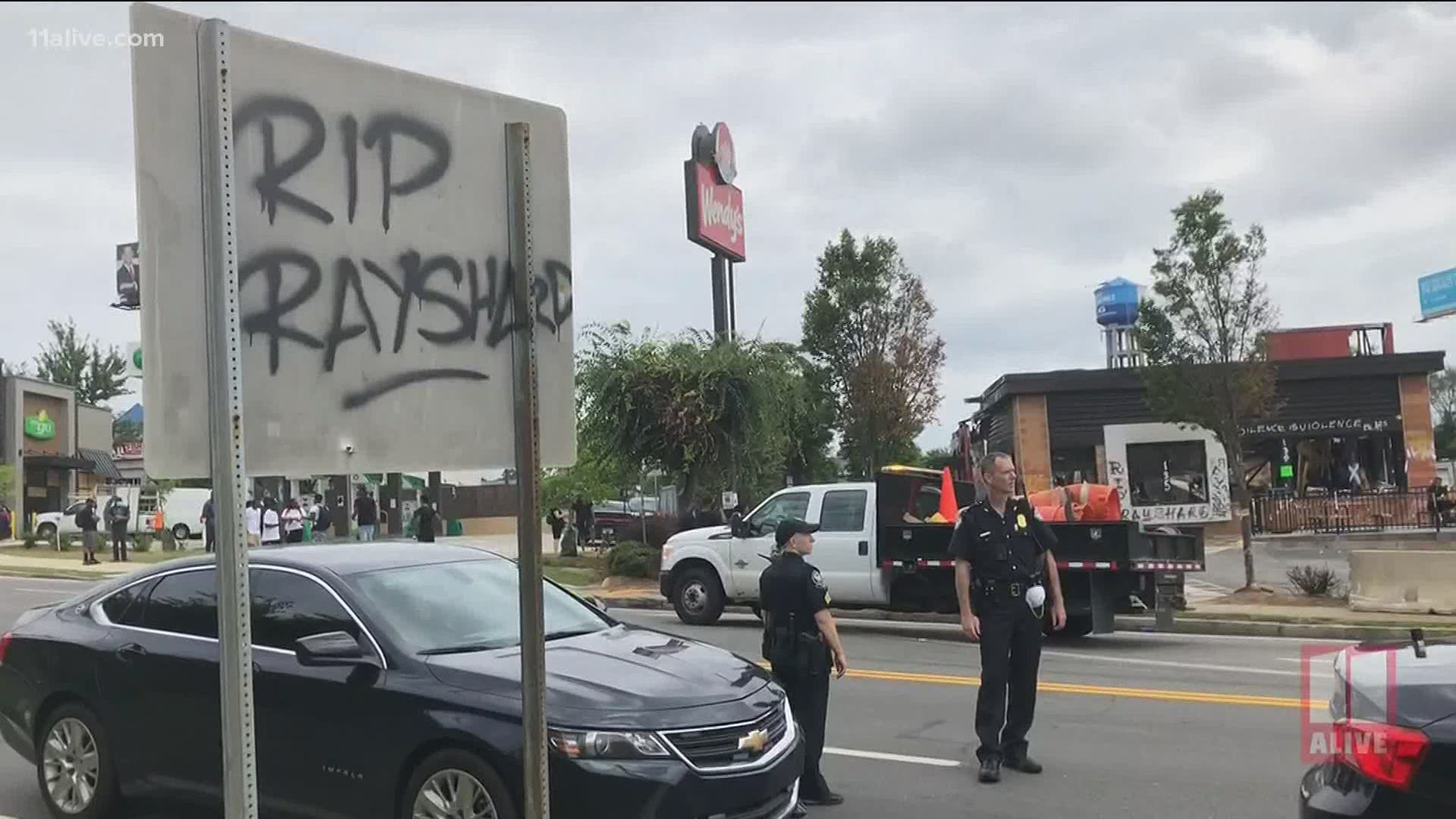 ATLANTA — When the city of Atlanta cleared out the Wendy's where Rayshard Brooks was killed in a police shooting, they didn't just disperse demonstrators and activists who had reclaimed the site of the burned-out fast food restaurant in recent weeks.

Following the shooting death of 8-year-old Secoriea Turner on the night of July 4 across the street from the Wendy's, Zoe Wilson said that, while the group had no part in the girl's death, he nonetheless understood that the city might ask them to leave.

What hurt, he said, was that they also threw out the signs, artwork, flowers and other displays that had turned the site into a memorial, and which activists had hoped would lay the groundwork for a lasting peace center at the site.

"The way they came in was wrongful," Wilson told 11Alive. "Tearing up his memorial, tearing up his pictures, throwing all the stuff out - they just did a beautiful mural on the side of the building, tore it up. That was wrong, that was hurtful, that was really painful."

On the day of July 4, activists at the site - which included Brooks' sister, Lady A - held a block party and food drive.

RELATED: Activists at Wendy's where Rayshard Brooks was killed claim they weren't involved in death of 8-year-old

Later that night, police say the 8-year-old girl was a passenger in a vehicle as her mother and a friend exited onto University Avenue from the Downtown Connector. The driver attempted to enter a parking lot on Pryor Road and, according to police, was confronted by an armed group who had blocked the entrance, and then started shooting at the car.

The girl died after her mother brought her to Atlanta Medical Center. The following day, Mayor Keisha Lance Bottoms said "we’re not having any more discussions" about the Wendy's site.

Wilson said at that point the city "could have asked us to pack up and leave, they could have said they're barricading it off."

"But no, they came in, first thing I see them do is go to the memorial and start tearing the memorial up," he said. "Things that people created with they hands, people that came out there and actually created something to show the community that we're trying to have peace and love."

On Monday the sleep-in activists issued a statement that said no one from their group "was involved in any way whatsoever" with the shooting and that they "unequivocally denounce any affiliations or biased rhetoric that connects us with this heinous killing of a child."

They said they are still calling for a permanent peace center at the site of the Wendy's.

"Although our hearts are broken by another loss in the Black community, it only further affirms our mission to erect a peace center at this site. It only affirms the urgent need for healing and peace in this community as we continue to be targets of trauma and violence. It is our hope and our prayer to find peace in the middle of all this tragedy and we hope others will join us," the statement said. "That is why we have already begun to create space for healing and restoration at this site as we stand in solidarity with our community demonstrating distinctly against violence and oppressive forces."

MORE ON THIS STORY

Who is Secoriea Turner? | The little girl killed on Pryor Road

$10,000 reward offered for info in deadly shooting of Secoriea Turner