Nightly curfews have been implemented by the mayor's office. 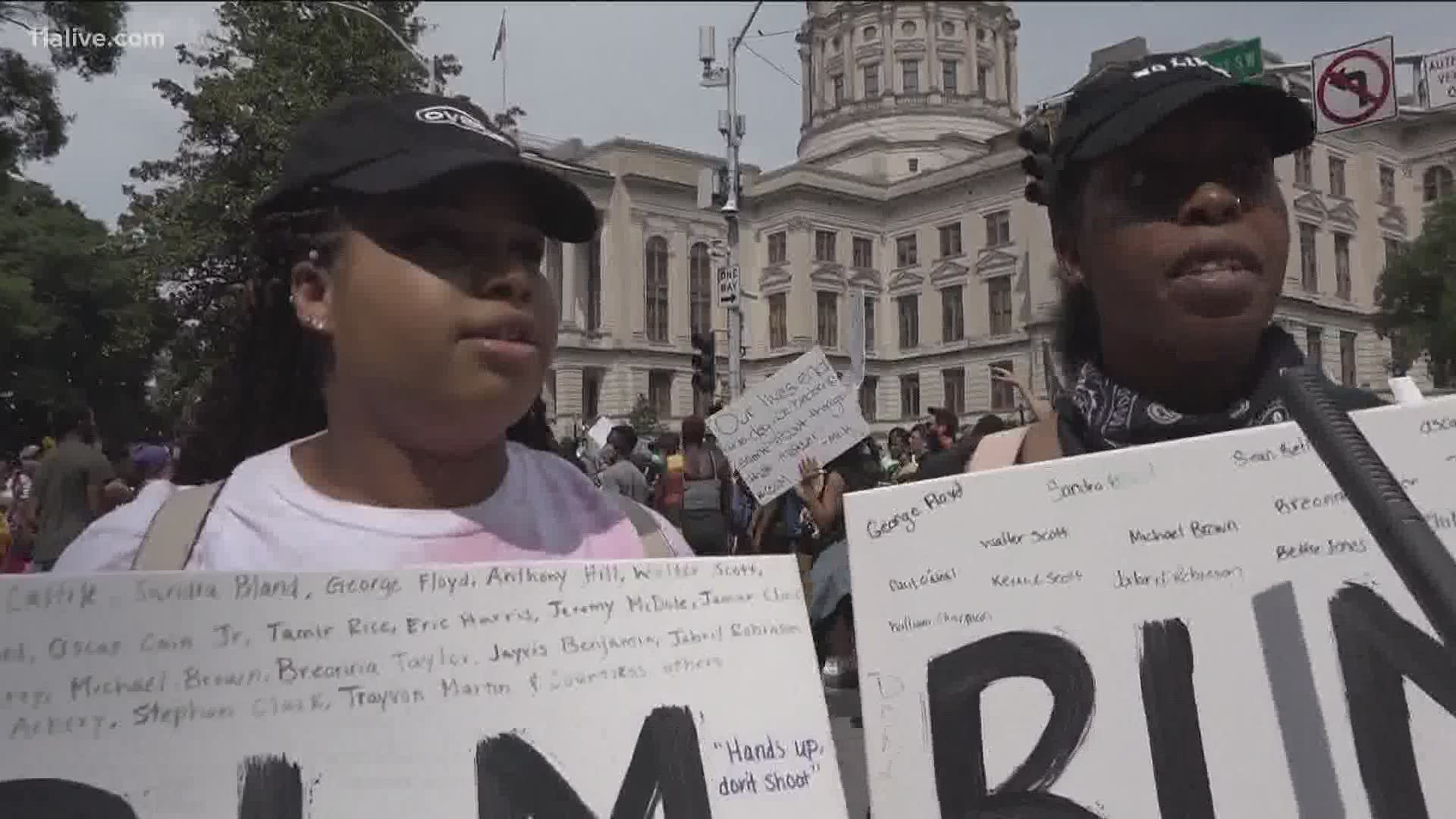 ATLANTA — Demonstrations in metro Atlanta continue for their sixth day, as protesters here join with others across the nation demanding justice for George Floyd.

The Minnesota man died after a Minneapolis Police Officer knelt on his neck for several minutes while Floyd pleaded for air and several other officers stood by.

The officers' actions - the latest in a string of other cases of black Americans dying during interactions with law enforcement, including the cases of Ahmaud Arbery and Breonna Taylor - have set off nationwide demonstrations, which began Friday in Atlanta and have taken place every day since.

Nightly curfews have been implemented by the mayor's office, and the Georgia National Guard was activated by Gov. Brian Kemp after Friday and Saturday demonstrations - largely peaceful during the day - devolved into intense clashes between crowds and law enforcement during the night.

Since, demonstrators have taken to the streets during the day to call for an end to the killing of black Americans during interactions with police.

11Alive has been following the daily protests.

Scroll to read the latest.

9: 35 p.m. - 11Alive crews report that both APD riot police and guardsmen are taking gear off, and the streets are virtually empty.

9:11 p.m. - 11Alive crews report crowds have dispersed, and National Guard troops are removing their gas masks and helmets. No tear gas was ever deployed.

9 p.m. - The curfew is now in place, but crowds have mostly dispersed. 11Alive crews report that only a few people linger on the sidewalks, as the National Guard stands by.

8:54 p.m. - Crowds are continue to thin, and 11Alive's Ryan Kruger reports the APD's bicycle officers are still on the skirmish line.

8:51 p.m. - National Guard vehicles, APD riot police are gearing up to clear out protesters as the curfew draws closer.

8:45 p.m. - The crowd is beginning to thin out as firecrackers go off.

7:41 p.m. - This group in Downtown says what’s going on now is bigger than any differences they have.

7:17 p.m. - 11Alive's Ryan Kruger reports the crowd has grown, and is the biggest and noisiest its been all evening.

6:40 p.m - Atlanta Mayor Keisha Lance Bottoms said she will issue an executive order to establish a commission that will examine the city's use of force policies.

5:31 p.m. - Demonstrators are back near Centennial Olympic Park for the sixth night of protests in Atlanta.

4:46 p.m. - No, piles of bricks are not being staged in Atlanta for violent protests. 11Alive's team verified.

4:18 p.m. - A young man is playing the saxophone downtown near Centennial Olympic Park to applause from both the crowd and police.

4:08 p.m. - Former President Jimmy Carter has weighed in on the civil unrest in the nation, saying in a statement, we must "say no more to a racially discriminatory police and justice system."

"People of power, privilege, and moral conscience must stand up and say 'no more' to a racially discriminatory police and justice system, immoral economic disparities between whites and blacks, and government actions that undermine our unified democracy," Carter's statement said.

3:45 p.m.: So far only a sparse crowd at the corner of Marietta St. and Centennial Olympic Park Dr., one of the main meeting points so far in the days of protests.

3:00 p.m. - Gwinnett County Police said they are aware and monitoring reports of a protest in the Hamilton Mill area of the county, after a social media post insinuated threats were possible.

2:22 p.m. - A crowd has gathered in Marietta Square for a demonstration.

12:46 p.m. - The City of Atlanta has announced curfews will be in place through the weekend as ongoing protests continue across the city.

The curfews were first put into place last Saturday night as protests turned violent the night before. They are intended to curtail potential looting or other negative actions during the overnight period.

The curfew will continue at 9 p.m. tonight until sunrise on Thursday. That same curfew will be in effect Thursday night.

An 8 p.m. to sunrise curfew is effective Friday, Saturday and Sunday nights. They all expire at sunrise the following morning.

'It's not about one moment': Stacey Abrams says protests draw parallels to Rodney King riots